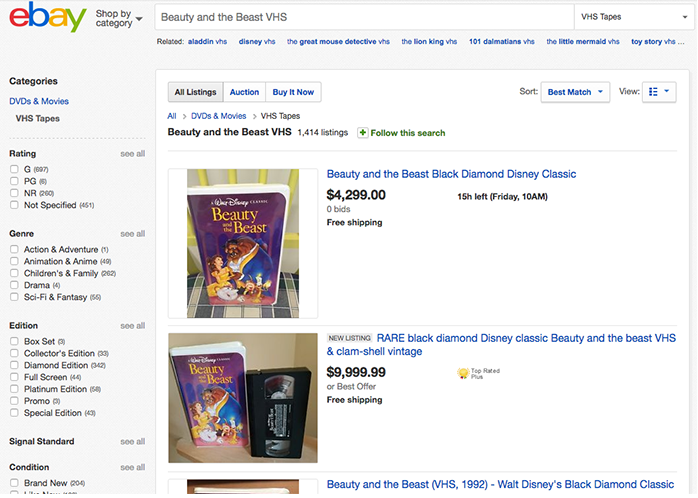 Given that almost everybody has a box of old Disney VHS tapes in their basement, these reports generate a lot of buzz. However, because everybody has a box of old Disney tapes in their basement, these “Black Diamond Collection” VHS tapes are worth very little.
Scammers can list items on Ebay and other online auction sites for however much they want — that doesn’t mean they’re actually worth that much. In the above screen grab, there were zero bids on both auctions for “Beauty and the Beast” VHS tapes.
After filtering through all of the artificially inflated Ebay auctions for Disney Black Diamond Collection VHS tapes, you’ll find a handful of auctions that are more fairly priced, like this one: 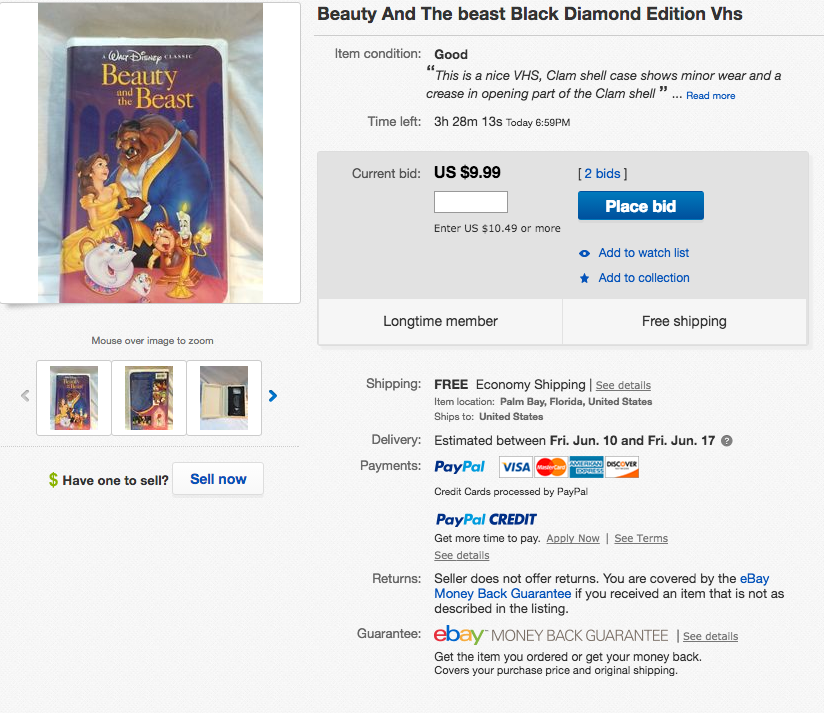 Black Diamond Tapes are easy to identify by the Black Diamond found on the Spine of the case with the Walt Disney’s Signature located inside the Diamond.  With a little hard work you can find tapes in good to mint condition.  While all of the tapes are getting hard to find in any condition the tapes are considered to be RARE in better conditions.  Because most tapes were opened and viewed till they simply wore out.  The cases also present a condition problem because of the plastic molding used to produce the cases.  The cases had a hallow space in between the plastic layers which wold crush are bend upon being dropped or having heavy pressure applied to it.  The cushioning supplied by this hallow space would help protect the tape but could make the case look beat up.  How many kids do you know that take great care of thier stuff to prevent damage.  I would say very few would have taken great care of thier movies.  So the vast majority of the Black Diamond Tapes and Cases were damaged or just simply wore out.  Plus the fact that in the early 80’s not every household had a VCR to play these tapes so far fewer of these early editions were produced..  All of this adds up to many of these tapes are now hard to find in any condition and RARE in in better conditions!

Collectibles gain value when they’re extremely rare. Because Disney VHS tapes have been so widely circulated, most of them have very little monetary value now. Unopened or mint condition VHS tapes have more value, but only if you can find a serious collector.
If all of this sounds familiar, it might be because it’s the exact same thing that happened with the Princess Diana Beanie Baby from the late 1990s. The value of the commemorative Beanie Baby has become wildly (and incorrectly) inflated on online auction sites. In reality, however, the Princess Diana Beanie Babies are worth anywhere from $27 to $47 (click here for our previous report on this).
The same is true for Disney Black Diamond Collection VHS tapes. They aren’t worth hundreds or thousands of dollars.