Summary of eRumor:
A young couple purchased a Princess Diana Beanie Baby for $15 at a flea market in England and sold the rare stuffed animal for $93,000 on eBay.
The Truth:
Reports that a young couple sold a Princess Diana Beanie Baby on eBay for $93,000 are false.
The claim went viral after media outlets in England like the Daily Mail and The Independent reported that Leah Rogers and Ryan Flanaghan had found the rare stuffed bear at a flea market for about $15, and that they hoped to sell it on eBay for $93,000. According to Daily Mail:

“As a former collector, Mr Flanaghan, 22, recognised the bear as a limited edition Princess Diana Di Beanie Baby — one of the most sought after in the collection which can be worth thousands of pounds.

“But the builder was stunned to find out that the bear was one of just 100 made around the world — and that another version is currently listed on eBay for £62,500.

“The pair is now hoping to sell the bear on the auction site and put the money towards a deposit for a house.”

“From time to time, prices paid by buyers on eBay for the Princess Beanie Baby increase dramatically for a short period of time. This generally happens when a blogger, a personality on a TV show or a news reporter claims Princess is valuable because it is selling for an extremely high price on eBay.

“That of course, is an uninformed misrepresentation or sometimes an intentional deception designed to scam potential collectors who do not understand how eBay really works.”

“…When we see spikes in the value of Princess Beanie Babies due to events like this, we do not use the outrageously high prices paid for Princess at eBay in our value computations for at least a 60-day period. By then the secondary market has settled sufficiently to resume using all of the prices paid at eBay in our value formulas. During these temporary periods of artificial value hype we focus more on the prices being received by known “honest” collectors and dealers.

“The same thing happened in 2013 when an uninformed ‘appraiser’ on a popular television show suggested a Princess Beanie found in an abandoned storage room could be worth hundreds of thousands of dollars depending on which version of Princess it happened to be. That incorrect assessment was also based on whatPrincess was being ‘listed’ for on eBay instead of the true indicator; the prices buyers actually ‘PAY’ for Princess on eBay.

“Ty introduced Princess on October 29, 1997. In November 1997, Ty informed U.S. retailers they could only order 12 Princess Beanie Babies for delivery in December. This restriction caused many collectors and retailers to believe Princess would be a limited edition. The ‘limited edition’ rumors caused a buying frenzy when Princess first shipped in December 1997.

“Collector and speculator demand immediately drove the secondary market price for a Princess Beanie Baby to well over $200. When a different version of the Princess tush tag appeared, speculation about the variations caused even more confusion about Princess.

“Much of the ’true’ production history for the Princess Beanie Baby is still a mystery. New collectors are misled into believing Princess is valuable by uninformed, dishonest or deluded sellers on eBay who frequently attempt to sell or auction Princess for prices ranging from hundreds to millions of dollars.” 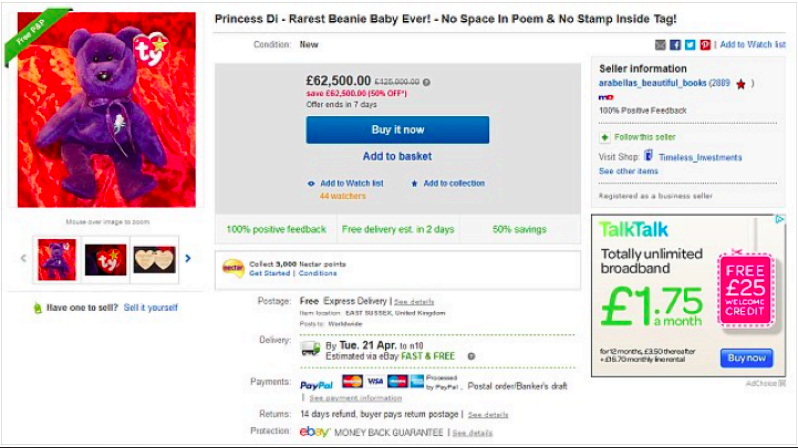