Hip-hop icon DMX died on April 9 2021, hours after confusion spread on social media thanks to premature reports of his passing.

The music news outlet XXL posted a statement sent by the rapper’s representatives:

We are deeply saddened to announce today that our loved one, DMX, birth name of Earl Simmons, passed away at 50-years-old at White Plains Hospital with his family by his side after being placed on life support for the past few days. Earl was a warrior who fought till the very end. He loved his family with all of his heart and we cherish the times we spent with him. Earl’s music inspired countless fans across the world and his iconic legacy will live on forever. We appreciate all of the love and support during this incredibly difficult time. Please respect our privacy as we grieve the loss of our brother, father, uncle and the man the world knew as DMX. We will share information about his memorial service once details are finalized.

But the previous evening the @Saint Twitter account, which bills itself as “News. Culture. Sneakers. Streetwear,” posted a photograph claiming that DMX had already died, with no explanation and no sourcing: 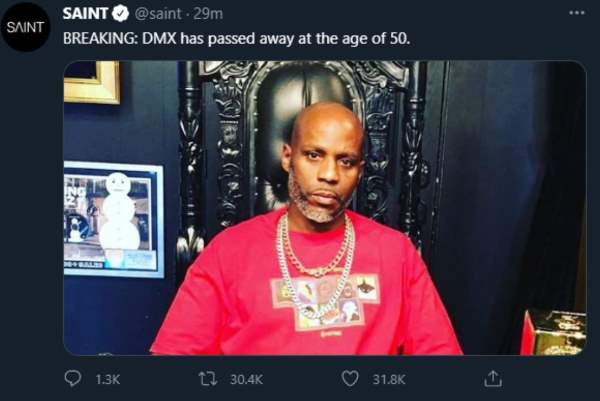 That claim was quickly debunked by DMX’s manager Steve Rifkind, who posted a video statement on Instagram saying, “DMX is still alive. Yes, he is on life support. But please, it’s not helping anybody by seeing these false rumors. Let the family relax for a night. You will be hearing a statement from the family sometime tomorrow.”

The original tweet by @Saint was shared more than 30,000 times on the platform before being taken down. The page then posted an apology:

We have deleted the tweet out of respect for DMX and his loved ones.

A close friend of DMX posted this on her Instagram story, has since been taken down.

We apologize for any confusion.

Prayers still going out to him and his family

We have deleted the tweet out of respect for DMX and his loved ones.

A close friend of DMX posted this on her Instagram story, has since been taken down.

We apologize for any confusion.

Prayers still going out to him and his family❤️ pic.twitter.com/K3KlxGIuIH

Simmons’ death was announced a week after he was hospitalized in White Plains, New York following a heart attack. Two days afterward, his former manager Nakia Walker told Buzzfeed that the rapper was in “a vegetative state, [with] lung and brain failure and no brain activity.”

Born in East Vernon, New York, Simmons survived abuse as a child and lived with addiction; he served a year in jail in 2018 for tax evasion. However, in 2019 he sought rehabilitation for drug addiction and also signed a new contract to record music for Def Jam, his original label. During his musical career, DMX became the first rapper to have his first five albums reach the top of the U.S. music charts. He also branched out into acting including turns in movies like Romeo Must Die, and Cradle 2 the Grave among others.

DMX is survived by his fiancee Desiree Landstrom; his mother Arnett Simmons; his children, and their mothers. He was 50.