On April 8 2021, Imgur user “ThisTimeLastYear” reposted the history meme below, which claimed that Italian doctors once developed a fictitious disease called “Syndrome K” to hide Jewish people from advancing Nazis:

A disease for the ages.

A version shared in April 2020 was similarly popular and shared the title (“A disease for the ages”). Underneath a black and white photograph of a hospital, text said:

‘Syndrome K’ was a fake disease made up by Italian doctors to save Jews who had fled to their hospital seeking protection from the Nazis. They were quarantined, and the Nazis believed it was a deadly, disfiguring, and highly contagious illness.

Neither post (from April 2021 or April 2020) included citations, and our attempts to verify the visual portion of the image were unsuccessful; most “matches” were related to content about “Syndrome K,” but intermittent results simply used the photograph to illustrate an old-fashioned hospital setting. At least one match indicated the story circulated in a similar form, but in Polish: 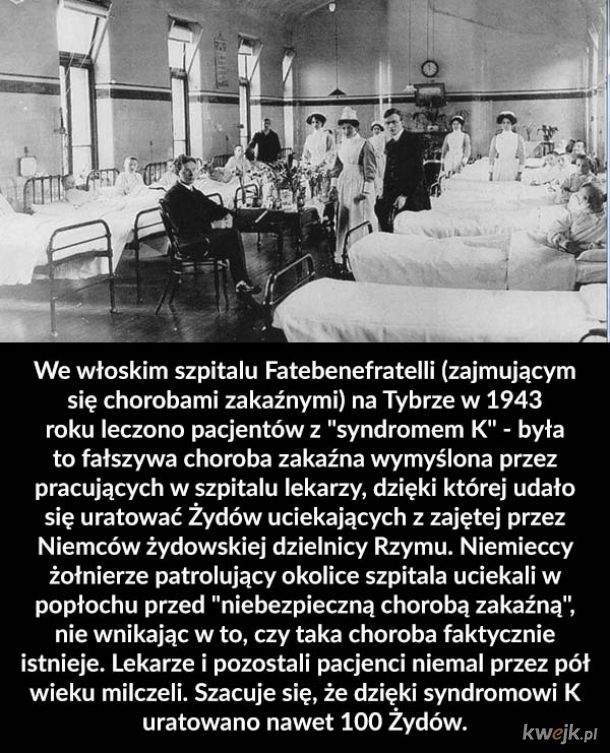 A July 2019 Quartz (qz.com) article (“An Italian doctor explains ‘Syndrome K,’ the fake disease he invented to save Jews from the Nazis”) involved a purported firsthand account from anti-fascist activist Adriano Ossicini:

“Syndrome K was put on patient papers to indicate that the sick person wasn’t sick at all, but Jewish. We created those papers for Jewish people as if they were ordinary patients, and in the moment when we had to say what disease they suffered? It was Syndrome K, meaning ‘I am admitting a Jew,’ as if he or she were ill, but they were all healthy.

The idea to call it Syndrome K, like Kesserling or Kappler, was mine.”

A subsequent portion of the article suggested that records detailing the extent of “Syndrome K” in the Italian hospital were difficult to find:

Accounts of how many Italian Jews were saved by Fatebenefratelli Hospital vary from dozens to hundreds, but survivor testimonies gathered by Yad Vashem confirm that at least a few more lives were saved after Oct. 16. Several families with small children sheltered there through the winter, until German forces swept through the hospital again in May 1944. One attendant at the Wallenberg ceremony, 83-year-old Luciana Tedesco, was safely hidden in the hospital as a small child during the last raid.

That reporting also linked to a 2004 BBC report about the ruse, and it began:

A retired Italian doctor has revealed for the first time how he invented a fictitious disease which fooled the Nazis during World War II.

The trick of prescribing Jews with a mysterious illness terrified the Nazis and saved 45 Roman Jews.

Dr Vittorio Sacerdoti has told his remarkable tale on the 60th anniversary of liberation of Rome.

He worked from a small and ancient hospital based on an island in the River Tiber.

From his flat in the Jewish ghetto where he still lives, he told the BBC’s Guto Harri in Rome that he still remembers the day the Nazis turned up at the ghetto to take away his fellow Jews.

Just 28 years old at the time, he used courage and ingenuity to save 45 people from certain death.

A Wikipedia page for Fatebenefratelli Hospital (the purported location of the “Syndrome K” gambit) asserted that “no historical evidence” existed to validate the accounts:

Fatebenefratelli Hospital (officially Ospedale San Giovanni Calibita Fatebenefratelli) is a hospital located on the western side of the Tiber Island in Rome. It was established in 1585 and is currently run by the Brothers Hospitallers of Saint John of God. The hospital is said to have sheltered many different fugitives during the German occupation of Rome (1943-1944), including some Jews. Between 2007 and 2012 two books by Pietro Borromeo and Pius XII’s apologist Gordon Thomas claimed that the hospital sheltered a large number of Jews under the cover of an invented “k” syndrome. However, no historical evidence of this event has been found and testimonial evidence is contradictory.

But we were able to find some oral histories supporting the claims. Holes in record-keeping are not an uncommon issue regarding Nazi Germany and its actions during World War II. In previous fact checks, we have encountered instances where records were destroyed both intentionally and inadvertently, along with a general tendency for accounts to emerge decades after the events took place.

The United States Holocaust Memorial Museum (USHMM) maintained a record about the hospital, “USC Shoah Foundation Institute testimony of Vittorio Emanuele Sacerdoti,” but it was only available to in-person visitors and therefore unavailable to us at this time. That record included information about the testimony provided:

Initially, a blurb published by Johns Hopkins Berman Institute of Bioethics looked promising, but it simply aggregated the Quartz piece quoted above. As is often so the case with claims regarding the Third Reich, verifiable records were difficult to dig up, generally due to myriad factors such as events occurring during a global war, the secrecy involved in the described incident, and the decades between the occurrences (in the 1940s) and the first official testimony provided (in the 1990s).

An Imgur post from 2020 and 2021 described the use of a “Syndrome K” in an Italian hospital (Fatebenefratelli) to effectively hide Jewish people from Nazis. As of 2016, the story had circulated in articles and on memes, often alongside a possibly unrelated image; the USHMM maintained at least one oral history provided by Sacerdoti in May 1998. We rated this claim Decontextualized, due in part to difficulty in verifying claims made about Nazi atrocities and the secrecy through which anti-Nazi and anti-fascist actions were carried out during that period.