On July 16 2020 the Facebook page Memes Republic commanded its followers stop whatever they were doing and “Google who invented blow up dolls” immediately:

The post rapidly racked up shares, nearing 60,000 in under 24 hours. So what happened if you Googled “who invented blow up dolls”? This: 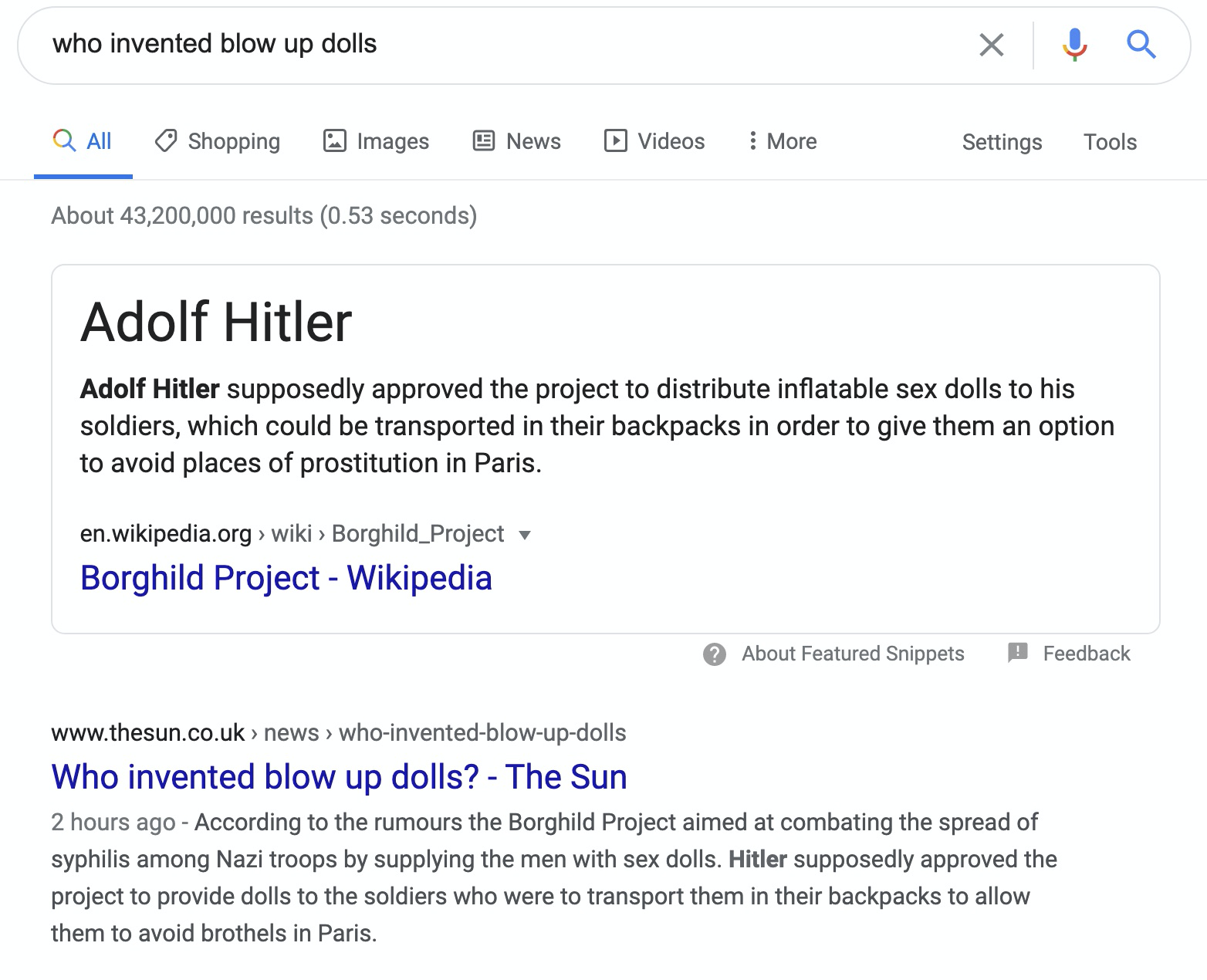 In the screenshot, a highlight from Google provided the anticipated bizarre answer: Adolf Hitler. Under that was a then-recent news item about the search trend.

So did Adolf Hitler himself really invent blow up dolls? Let’s unpack it.

What is a Blow Up Doll?

In the era of hyper-realistic “RealDolls,” some younger folks might not have a frame of reference for blow up dolls.

Before RealDolls were introduced in 1996, people seeking a semi-realistic companionship proxy had fewer choices. Wikipedia explained the concept concisely on their “Sex doll” entry:

When Were Blowup Dolls Invented?

Although sex dolls (and blowup dolls) have appeared in many forms, inflatable “blowup dolls” are among the most recognizable due to their occasional appearance in films and on television for comic relief. However, the history of sex dolls goes back much further than Adolf Hitler, according to a 2014 deep dive in The Atlantic:

Though sailors’ dolls were just generic substitutes for the female form—any female form—there are some instances of men creating dolls as stand-ins for specific women. In 1916, after the Austro-Hungarian artist Oskar Kokoschka was jilted by his lover, the pianist and composer Alma Mahler, he wrote that he had “lost all desire to go through the ordeal of love again.” (This is a refrain that doll owners have repeated through the ages.) He still desired Mahler, though, so much so that he provided her dressmaker with incredibly detailed instructions for a life-sized replica of Mahler, specifying not only her appearance but everything down to how her skin should feel. Historians differ on what happened after Kokoschka received the doll. One thing is for sure—it was extremely furry, covered in “skin” more reminiscent of a plush stuffed animal than a human woman. One account says he was “enraptured” by it all the same; others say he was disappointed. He made several drawings of it, and, according to some reports, eventually destroyed it at a party, either burning it or burying it in his garden.

But the most public prelude to the modern sex doll was the mannequin-based art created by Surrealists like Man Ray and Salvador Dalí. A work called “Mannequin Street,” featured at the Exposition International du Surréalisme at the Galerie des Beaux-Arts in 1938, included 16 mannequins outfitted by different artists, while Dalí’s “Rainy Taxi” centered on a female mannequin whose half-undressed body was crawling with live snails. Man Ray once claimed that the Surrealists not only infused these works with eroticism but personally “violated” their mannequins.

Well? What About Hitler?

A persistent urban legend holds that Adolf Hitler charged one of his SS commanders to design sex dolls for German soldiers during World War II, to prevent them from slaking their lust with non-Aryan women. Whether or not this is true, the commercial sex doll does find its origins in Germany. The Bild Lilli doll—invented in the 1950s and modeled on a sexy, outspoken comic-strip character called Lilli—was an 11.5 inch plastic model, not a penetrable sex doll. In his book The Sex Doll: A History, Anthony Ferguson calls the Bild Lilli “a pornographic caricature.” Although it was marketed to adult men, the doll is widely cited as the inspiration for Barbie, so, you know, take that and run with it.

It seems that the claim that Hitler or people working on his behalf “invented” blowup dolls had its origins in an undated German-language Bild article. There was no obvious date on the article, but archives of it dated back to 2003.

Titled “The Borghild-project – a discreet matter of the [Third Reich],” that piece did not even say Adolf Hitler “invented” the blowup doll. In actuality, a rough translation asserted:

The world’s first sexdoll – or ”gynoid” – was built in 1941 by a team of craftsmen from Germanys Hygiene Museum Dresden. The project was supervised by the famous preparator and technician Franz Tschakert. The ”Father of the woman of glass”, which happened to be the sensation in 1930’s II. International Hygiene-Exhibit, used his skills and experience in order to create a kind of doll the world had never seen before.

The ”field-hygienic project” was an initiative of Reichsführer SS Heinrich Himmler, who regarded the doll as an ” counterbalance” (or regulating effect )for the sexual drive of his stormtropers. In one his letters, dated 20.11.1940 he mentions the ”unnessessary losses”, the Wehrmacht had suffered in France inflicted by street prostitutes.

“The greatest danger in Paris are the wide-spread and uncontrolled whores, picking by clients in bars, dancehalls and other places . It is our duty to prevent soldiers from risking their health, just for the sake of a quick adventure.”

The project – called Burghild in the first place – was considered ”Geheime Reichssache” , which was ”more secret than top secret” at the time. Himmler put his commander-in-chief SS-Dr. Joachim Mrurgowsky in charge, the highest ranking officer of Berlins notorious SS-institute.

As established previously, sex dolls existed in one form or another well before Hitler. It remains possible that, if the claim was credible, the Nazis elevated sex dolls to the “blowup doll” form seen commonly before RealDolls were invented. However, as the same Bild piece explained:

Between June 1940 – 1941 IG Farben had already developed a number of ”skin-friendly polymers” for the SS. Special characteristics : high tensile strength and elasticity. The cast of a suitable model proved to be more difficult.

Nothing in the article’s lengthy discussion about the characteristics of the purported sex dolls suggested that they were inflatable. On the contrary, it described bronze molds and hairstyling, suggesting that if the project existed, the dolls were more of a precursor to RealDolls than the inexpensive blowup alternative.

No Evidence the Borghild Project Was Real?

In June 2005, BoingBoing.com published a post (“Nazi Sex Dolls”), about the rumor that Hitler’s men endeavored to supply soldiers with an alternative to sex workers during World War II. The site aggregated a post on the now-defunct Gawker Media site Fleshbot, reporting:

If there were ever a perfect example of a blog post title that violates Godwin’s law, I reckon this is it. Anyway — Fleshbot rounds up links to reports of a Nazi “field-hygienic project” during WWII. Evidently, the idea was to provide soldiers with an inanimate alternative to “disease-spreading” prostitutes.

“The doll has only one purpose and she should never become a substitute for the honourable mother at home… When the soldier makes love to Borghild, it has nothing to do with love. Therefore the face of our anthropomorphic sex machine should be exactly like the common wanton’s face.”

BoingBoing followed up a couple of weeks after the initial 2005 post with a counterargument. In that post, “Nazi sex doll story: das ist bogus,” the site presents a rebuttal from a reader. It began:

It appears that we must toss the previously-blogged tale of Nazi Sex Doll Borghild (Link) on the dungheap of internet hoaxdom.

The first line of the letter yielded a clue about the rumor’s trajectory, and that the appearance and disappearance of various iterations buried the origins of the rumor:

I came across the story about these dolls about a year ago [in 2004] after a Canadian researcher sent an email around asking whether anyone knew anything about this doll apart from what it said on the (now mostly defunct) site borghild.de.

Independently of each other, Jens Baumeister and I have concluded from the information available to us, that the “Borghild” story is quite probably a fake. (The German posting on my research is here. Jens has posted his results here. Some of his findings are translated here: Link).

The main problems with “Borghild” are:

So in the end it seems like the Nazis were not, after all, planning to equip their soldiers with sex dolls. That hardly comes as a surprise.

A viral July 2020 Facebook post urged users to Google “who invented blowup dolls,” a directive returning a highlighted-by-Google result indicating that person was “Adolf Hitler.” But sex dolls were in existence for centuries before World War II, and the claim in its original, heavily disputed form was not that Hitler invented blowup dolls. It was, in fact, that the Nazis tried to develop advanced sex dolls to prevent soldiers from visiting sex workers. Even that appeared to be false, hinging entirely on an early 2000s Bild article which again, did not claim that Hitler invented blowup dolls. The disappearance of source material was such that the claim became a “persistent urban legend,” but the underlying information contradicted it on every level.