Deaths unrelated to COVID-19 are routinely being attributed to the virus in order to make it seem worse than it is.

In July 2020, social media users continued spinning a remark by a top health official in Illinois to claim that death tolls attributed to the COVID-19 pandemic have been inflated around the United States — and to attempt to sow doubt around the actual dangers posed by the virus.

The idea that public health experts are purportedly inflating the death toll in order to frighten the populace has been a persistent claim from those denying the severity of the global pandemic: 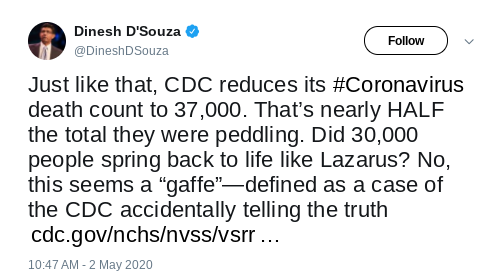 Many have latched on to Illinois as an example of how this might be playing out. For example, a YouTube channel posted a clip of remarks made by Dr. Ngozi Ezike, director of the state Department of Public Health, during an April 19 2020 briefing held by Gov. J.B. Pritzker.

Ezike announced at the time that 30,357 cases had been confirmed across the state, with 1,290 deaths. She also fielded a question posed to Pritzker asking whether the death of a sixteen-year-old boy in Cook County attributed to the disease that month was the first instance of the virus killing someone in that age group. Ezike responded:

I don’t have that information at my disposal at this time. We have had people of all age groups die. I just want to be clear in terms of the definition of people dying of COVID. The definition is very simplistic. It means, at the time of death it was a COVID-positive diagnosis. That means that if you were in hospice and had already been given a few weeks to live and then you were also were found to have COVID, that would be counted as a COVID death. Technically, even if you died of clear alternate cause but you still had COVID at the time it is still listed as a COVID death. Everyone who’s listed as a COVID death doesn’t mean that that was the cause of the death but they had COVID at the time of their death. I hope that’s helpful.

As WAND-TV reported the following month, local officials used Ezike’s statement to fuel their claim that the state death toll of 3,000 people attributed to COVID-19 had been inflated:

On May 1, WAND News reached out to Ray Koonce, a member of the Christian County board. He recently sued the Governor over the extended stay-at-home order. When asked if he believes Dr. Ezike, he frankly responded “No I do not.”

Representative Darren Bailey also sued the Governor. He told WAND News the governor is not being factual.

“You could be driving home and be in an auto accident and die from that,” Bailey said. “And if you had COVID-19 in your system, that death gets labeled as COVID.”

As Scientific American reported, accusations that death statistics related to COVID-19 are being “inflated” fail to account for signs that they might actually be undercounted, because states and jurisdictions do not have a uniform reporting for death certificates. In Chicago — the largest city in Illinois — medical examiners are involved in making that determination for every case involving the virus.

But Ezike specifically refuted the argument that unrelated deaths are attributed to the virus in an interview with nonprofit news organization Block Club Chicago published in May 2020:

“As we learn more about the disease, there may have been less typical presentations of COVID-19 that were not appropriately attributed to COVID because there wasn’t a test done because the suspicion was not there,” Ezike said. “There [are] also some additional deaths [of people] who happened to be COVID-positive but the COVID infection had nothing to do with the death.”

For example, a death might be reported to the state and the death certificate might mention coronavirus — but when officials do a further review and see the person died from a shooting or car crash, they exclude that person from the state’s COVID-19 death toll, Ezike said.

In a separate interview with WMAQ-TV, Ezike provided more context for her initial remarks, saying that the effects of COVID-19 on a patient made it harder to gauge how much of a factor it could be on their death.

“It’s very hard to separate the respiratory illness from some of these other manifestations that could also be linked to COVID, so there is a reason to put them together,” Ezike told the station. “Even if someone had heart disease, global data has established that [COVID-19 can cause] more serious complications, and we’ve seen that for heart disease and chronic obstructive pulmonary disease.”

“If that person passes away from pneumonia because they had obtained this virus, then that virus directly contributed to their death and should be placed as a contributing factor on their death certificate, and that is the only reason why it should be,” Allmon told WICS-TV.

At the time of publication on July 17 2020, the state health department’s website listed 7,272 deaths connected to the disease and 159,334 total confirmed cases.