About 700 actors were hired to fill seats at the 2016 Democratic National Convention after delegates for Sen. Bernie Sanders staged a walkout.

Right-wing bloggers, opportunistic as always, were all too eager to seize on dissent at the 2016 Democratic National Convention in order to sow conspiracy theories.

More than a hundrd delegates for Vermont Sen. Bernie Sanders (I) walked off the convention floor on July 26 2016 in order to protest his loss in the party’s primary to former Secretary of State Hillary Clinton, even as Sanders himself made the motion to the convention to formally nominate Clinton.

“This has nothing to do with Bernie, this is our revolution,” delegate Victor Caula told NBC News.

Amid the unrest, right-wing bloggers gleefully circulated the claim that the Democratic National Committee was looking to hire 700 people to be “utilized as actors” at the event and shut Sanders delegates out. The key to the claim was a Craigslist post (a typically shoddy source of information) that read:

We currently have a number of empty seats that will need to be filled as we are currently removing a number of people and need to refill their seats for the remainder of the conference.

You will be paid $50.00 each night for the remainder of the convention. You will be required to cheer at all times and will be asked to dress properly and possibly wear some promotional material. 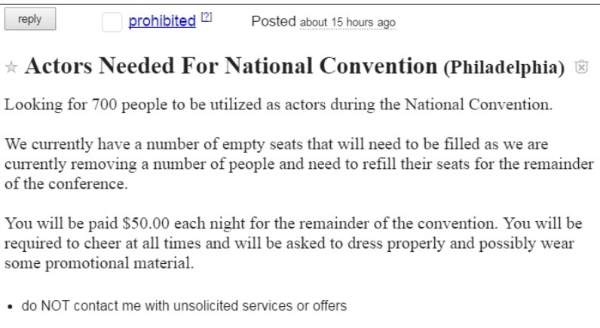 Videos also circulated of people claiming they had seen “seat fillers” at the convention. And as the Washington Post reported, rumors also spread of Clinton delegates stripping credentials from Sanders’ supporters so that they could fill the Wells Fargo Center with people backing her. One of the senator’s delegates, Steven Abreu, said he was told two days after the walkout that he was denied credentials to re-enter the event after being seen holding up a sign objecting to the Trans-Pacific Partnership (TPP), a trade agreement between the U.S. and eleven other countries.

“I’d understand if I was holding up signs that said ‘Obama’s from Kenya’ or ‘Crooked Hillary belongs in jail,'” Abreu told the newspaper. “But I did the least disruptive thing I could. I only held up my sign when others stood up and cheered. I don’t know why they stripped my credentials, because all I did was express civil disobedience against the TPP.”

There was no mass stripping of credentials; delegates, like Abreu, had to pick up new passes each day, as a security measure, and it was at that point when volunteers for Sanders fell off the roles. A Craigslist ad asking for “700 actors” to fill seats did not come from anyone related to the convention and bore little relationship to the reality of the convention, where the sporting arena was packed cheek-to-jowl, with fire marshals cutting off access to some areas as they filled in.

Despite winning the popular vote, Clinton lost the 2016 presidential election to Republican Donald Trump. Between 6 percent and 12 percent of Sanders supporters were estimated to have crossed party lines and voted for Trump, in spite of the senator’s support for her nomination. NPR reported in August 2017 that an estimated 12 percent of Republican primary voters voted for Clinton.