As thousands of Americans took to the streets to protest the election of Donald Trump to the United States presidency in 2016, a concerted, antisemitic disinformation push attempted to delegitimize the demonstrations by blaming them on a familiar target in Jewish liberal billionaire George Soros.

As CNN reported shortly after Trump was elected (while losing the popular vote):

Protesters are upset about Trump’s policies on health care, the environment, LGBT rights and other issues. Some are questioning the legitimacy of Trump’s victory over Hillary Clinton by noting that although he took the Electoral College, Clinton won the popular vote.

Over the weekend, Los Angeles saw anti-Trump protests swell to 8,000 people on Saturday. In New York, thousands peacefully marched two miles on Saturday and gathered outside Trump Tower, the President-elect’s home in Manhattan, where they chanted “not my president.”

We have collected some examples of the disinformation that were planted around Soros in 2016, narratives which have been enthusiastically reused again and again since then:

“Here Are the Buses They Came In”

One effort to paint Soros as an instigator came out of Austin, Texas, where a man identified as Eric Tucker posted photographs of a group of charter buses with the caption “Anti-Trump protestors in Austin today are not as organic as they seem. Here are the busses [sic] they came in,” and adding the hashtag #fakeprotests: 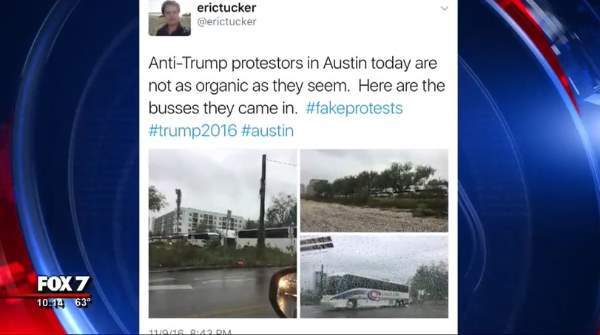 As often happens, Tucker’s content was shared by other users, including one who republished the photographs alongside the caption, “How to start a riot”: 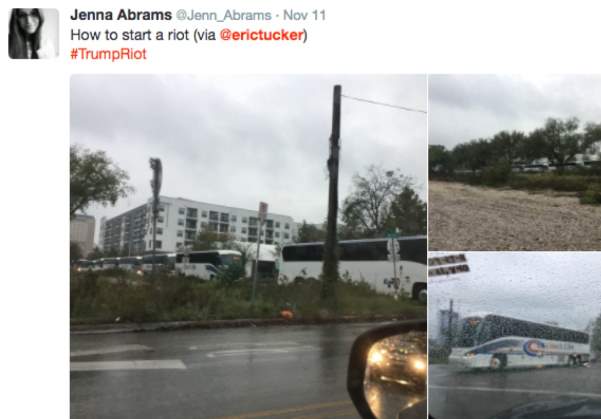 As KTBC-TV reported, Tucker’s tweet was shared more than 17,000 times before he deleted it and admitted that he had been wrong.

“I thought going on Twitter was not a big deal,” he later told the station. “I thought, I have 40 followers, I post twice a year on Twitter, I’m not a professional blogger at all.”

In reality, the buses were in the Texas capital as part of a conference completely unrelated to either Trump or any protests against him.

“I hadn’t really fact-checked at all,” Tucker admitted.

Whether by accident or otherwise, Tucker’s post played into the recurring delusion that “convoys” of demonstrators were being ferried into particular cities.

An equally-derivative piece of disinformation centered around a Craigslist job ad created by an alleged “Washington Community Action Network” recruiting protesters by offering between $15 and $22 per hour in pay and even medical and dental benefits: 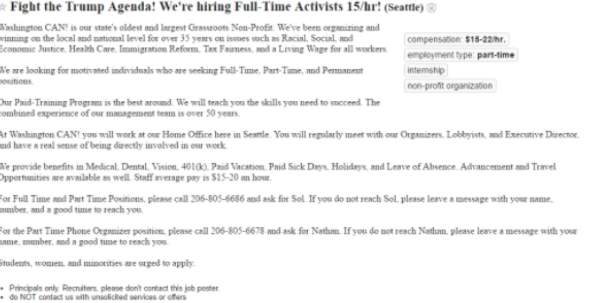 There was, of course, no corroboration that this was anything but someone using the Craigslist platform for their own ends.

While similar hoaxes have continued to spread online since 2016, one notable exception drew attention online in October 2018 when an ad from an agency called Good Jobs Nation actually seeking people to stand in line for a Trump rally was picked up by the satire site The Last Line of Defense.

As Buzzfeed reported at the time:

Good Jobs Nation advocates for laid-off and retired workers across the US. Many of their members are retirees and can’t stand in line for several hours to get into a Trump rally. So they hire line standers. In the ad, [the group’s field director] listed his phone number and invited anyone interested to call or text.

As the ad circulated online, it became a flashpoint for both critics and supporters of Trump:

Anti-Trumpers seized on the ad as proof that Trump’s rallies are poorly attended and therefore require people to be hired to make lines look longer. On the right, the Craigslist ad was cited as more proof that liberals have to pay protesters to go after Trump.

As Bloomberg reported, the data was shared at the site “DCLeaks”:

In the case of Soros’ Open Society, hackers stole a trove of documents after accessing the foundation’s internal intranet, a system called Karl, according to a person familiar with its internal investigation. On August 3, the DCLeaks.com Twitter account tweeted “Check George Soros’ OSF plans to counter Russian policy and traditional values,” attaching a screenshot of a $500,000 budget request for an Open Society program designed to counter Russian influence among European democracies.

The claim was based on a statement in the OSF budget proposal saying, “Our inclination is to engage in activities and with actors that will understand and counter Russian influence and support to movements defending traditional values.” But nothing concrete was ever produced showing that this meant paying protesters in practice.

In July 2018, a grand jury indicted twelve Russian intelligence officers, identifying them as the creators of the “DCLeaks” blog.

The right-wing Washington Times claimed in 2015 that Soros “spurred” protests against police brutality in Ferguson, Missouri:

In all, Mr. Soros gave at least $33 million in one year to support already-established groups that emboldened the grass-roots, on-the-ground activists in Ferguson, according to the most recent tax filings of his nonprofit Open Society Foundations.

The financial tether from Mr. Soros to the activist groups gave rise to a combustible protest movement that transformed a one-day criminal event in Missouri into a 24-hour-a-day national cause celebre.

In reality, the extrajudicial killing of 18-year-old Michael Brown by law enforcement office Darren Wilson — and a grand jury’s decision not to indict Wilson for the killing — spurred demonstrations both in Ferguson and around the United States.

This month we invested $2.5 million to support frontline community groups in Ferguson, as well as develop a national database on the police use of force — both to better identify problematic practices and examples of effective, responsive, and accountable policing.

That same month, the OSF announced that it pllnaned to award $2.9 million in grants to groups in both Ferguson and Staten Island, where police killed another man, Eric Garner:

One portion of the investment is intended to help community groups in Missouri advance initiatives to promote police accountability. A second component will further the development of a nationwide database involving police stops and use of force, thereby addressing one of the systemic flaws that limits the ability of police departments and communities to address bias-related issues.

Efforts to blame Soros for just about anything that upsets the far right have not abated since 2016, as various strains of disinformation have painted him as a force behind various other demonstrations and causes.