Only 3 percent of Trump voters believe President-Elect Joe Biden is the "legitimate winner" of the 2020 election.

On November 24 2020, Breitbart.com published an article headlined, “Nolte: Only 3% of Trump Voters Believe Joe Biden Is Legitimate Winner,” which began:

We all need to keep in mind that, except for a handful of pollsters, polling is irretrievably broken. So, with a grain of salt and a big, broad smile across my face, I am happy to pass along this CNBC/Change Research poll that shows only three percent — a mere three percent, of President Donald Trump’s supporters see former Vice President Joe Biden as the legitimate winner of the 2024 presidential election.

Alternately, far-left CNBC reports that a “staggering 73% of respondents consider Trump the legitimate winner. Another 24% said they are not sure.”

Breitbart’s framing of the purported polling data was odd, peppered with “LOLs” and comments expressing a lack of faith in the integrity of both polling and the underlying source:

Who knows what CNBC really did. Like NBC does with the news, CNBC might have just fabricated this poll out of thin air so they would have a headline.

Good for you Trump supporters!

As the president makes unsubstantiated claims about electoral malfeasance and sows doubts about vote tallies, only 3% of Trump voters surveyed said they accept Biden’s victory as legitimate, the survey released Monday found. A staggering 73% of respondents consider Trump the legitimate winner. Another 24% said they are not sure.

A mere 3% of Trump voters believe he should concede to Biden and start the peaceful transfer of power. Another 31% want the president to fight in court until states certify results. Two-thirds, or 66%, think Trump should never concede.

CNBC added information about the dates during which Change Research surveyed participants, as well as how many total individuals participated:

The poll’s findings diverged significantly from a Harvard CAPS/Harris poll conducted in approximately the same time frame (November 17 and 19 2020). In that poll, 26 percent of Trump voters indicated they thought that Trump ought to concede, and 74 percent chose “wait”:

Did a Majority of Americans in a Poll Say Trump Should Concede?

That same poll [PDF] by Harvard CAPS/Harris addressed the division between voters who believed the election was “fair”: 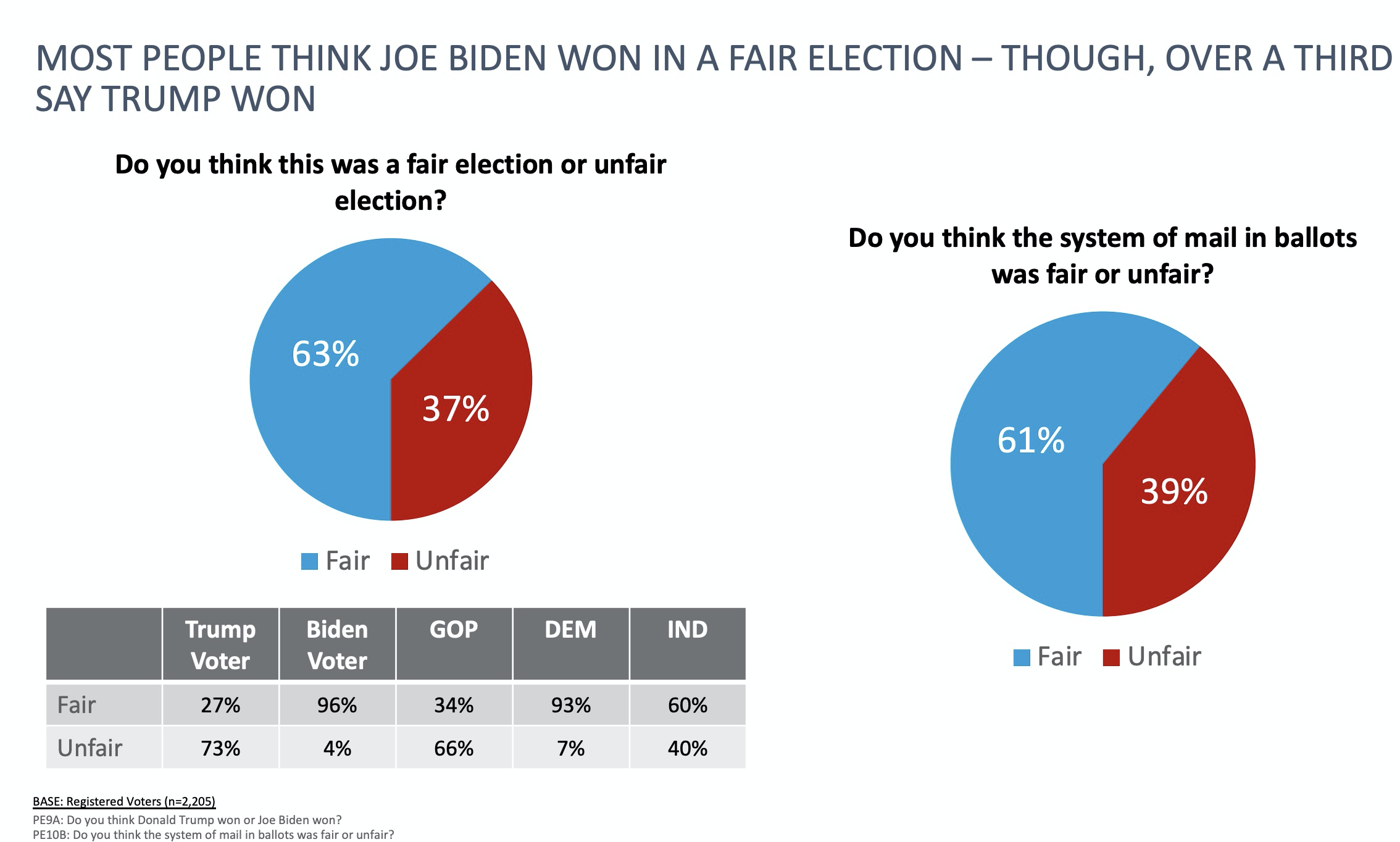 In that poll, the respondents chose “fair” as follows:

As for unfair, respondent answered in the following percentages:

Harvard CAPS/Harris’ data not only covered a broader swath of the voting populace; it also produced far less dramatic findings. Responses were predictably split along party lines, but 27 percent of Trump voters described the election as “fair,” and 26 percent believed at the time polling was conducted that Trump ought to concede.

Change Research published a blog post about their concurrent poll on November 24 2020, explaining:

Reaction to the election & transition

The lack of recognition of the legitimacy of the election among Trump voters is dramatic and devastating for our democracy. There is little desire for Trump to concede and few concerns about the implications of a delayed transition.

Only 3% of 2020 Trump voters accept the election of Joe Biden as legitimate, 73% believe Trump is the legitimate winner and 24% are unsure. We should not be surprised that so few say Biden is the real winner when given the opportunity to say they are unsure, as this is consistent with the GOP establishment’s view at this time. Educational attainment and age are important factors, with 18-34 year olds, seniors, and college graduates the least likely to believe Trump is the true winner. Trump voters who say Newsmax is one of their primary political news sources are particularly likely to call Trump the real winner.

That section was followed by a table:

Change Research only included responses from “Trump voters,” 24 percent of whom selected “not sure” on whether they believed President-Elect Joe Biden’s election was legitimate. At the bottom of the blog post, Change Research provided information about the scope and methodology of the poll:

Change Research conducted a poll of 1,203 2020 Trump voters nationally on November 18-21, 2020. The full 2,559 voter sample was weighted to reflect the 2020 electorate, and the results were filtered to those who reported voting for Trump in 2020. All data shown in this document is among Trump voters only and the margin of error is +/- 2.83. Change Research reaches voters via targeted online ads that point people to an online survey instrument. Our Dynamic Online Sampling establishes and continuously rebalances advertising targets across region, age, gender, race, and partisanship to dynamically deliver large samples that accurately reflect the demographics of a population. Post stratification was done on state, gender, age, race, education, and 2020 presidential vote.

Change Research also offered expanded results from the poll [PDF], as well as a separate document about methodology [PDF]:

The survey was conducted online, using Change Research’s Dynamic Online Sampling and via text-to-web through a voter file sample. The full 2,559 voter sample was weighted to reflect the 2020 electorate, and the results were filtered to those who reported voting for Trump in 2020. Change Research collects survey responses through targeted online solicitations placed as advertisements on websites and social media platforms.

Polling aggregator FiveThirtyEight.com included Change Research among its 2020 Pollster Ratings, grading the outfit C- on a scale of A+ to F:

A letter grade from A+ to F that reflects a pollster’s Predictive Plus-Minus score. Pollsters with a relatively small sample of polling now receive a provisional rating rather than a precise letter grade. (An “A/B” provisional rating means that the pollster has shown strong initial results, a “B/C” rating means it has average initial results, and a “C/D” rating means below-average initial results.) It now takes roughly 20 recent polls (or a larger number of older polls) for a pollster to get a precise pollster rating. Firms banned by FiveThirtyEight are automatically given a grade of F.

A November 24 2020 Breitbart.com article’s titular claim that “Only 3% of Trump Voters Believe Joe Biden Is [the] Legitimate Winner” originated with a CNBC/Change Research poll, which was conducted at roughly the same time as a Harvard CAPS/Harris poll — and which covered many of the same general questions. While Change Research’s poll claimed its results showed that only three percent of Trump voters believed Biden was the legitimate winner of the November 3 2020 election, the Harvard CAPS/Harris poll found that 27 percent of Trump voters believed Biden won in a fair election.