Authorities in Japan spray "looters and rioters" with "indelible blue dye" so they can be arrested later.

A June 23 2020 post to the questionably named Facebook group “Facts First – Truth to Expose Media Lies” featured a photograph, which purportedly showed authorities in Japan dousing “rioters and looters” in “indelible blue dye” for their easy identification and subsequent arrests: 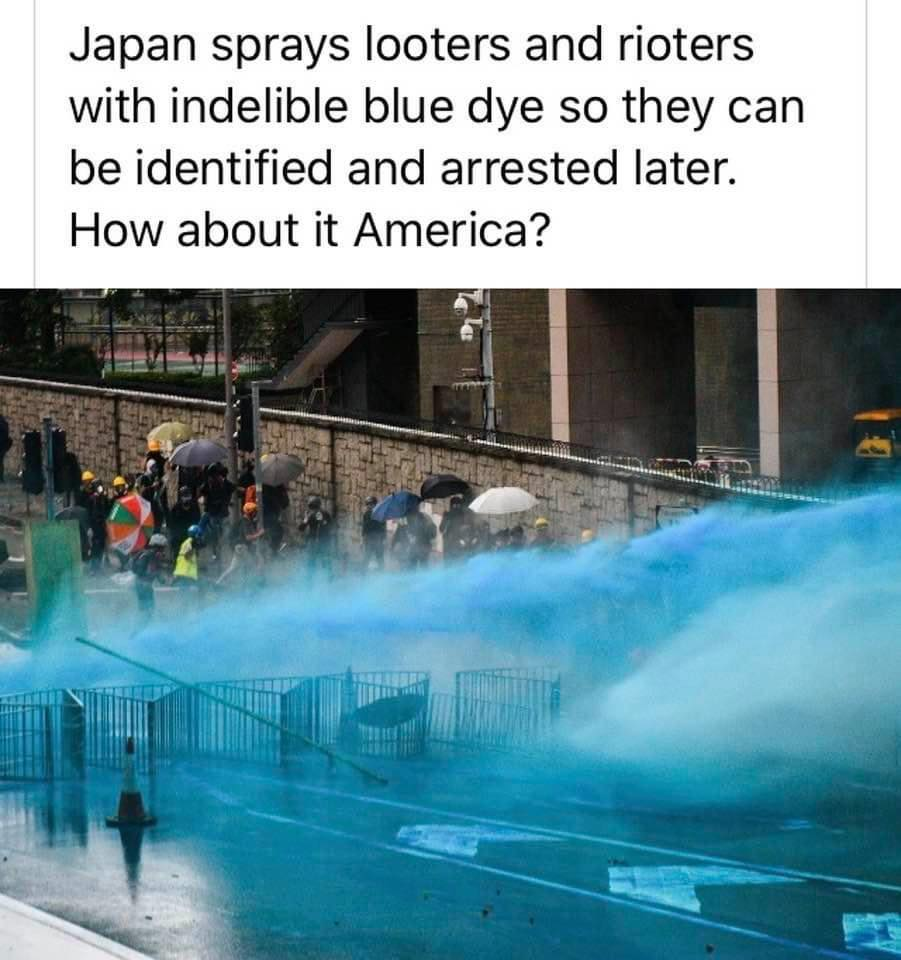 All that was visible in the half image, half text post was what looked to be a bright blue mist or smoke. To the right of the mist or smoke was a line of individuals, some with umbrellas, none of whom appeared to be “rioting” or “looting.”

Although the events of the image were initially open to interpretation, there was no clear crowd of misbehaving people being “dyed” blue by the substance. Text at the top read:

Japan sprays looters and rioters with indelible blue dye so they can be identified and arrested later. How about it America?

On first glance — in addition to the image not really appearing to depict a riot or looting — the claim seemed questionable. How would a cloud of “indelible blue dye” discern between individuals “rioting and looting,” versus people like those in the line just going about their business?

Was being swept up in a indelible blue dye mist sufficient evidence to justify arrest across Japan? Would it be possible, even if blue-dyed people were located, to prove they were definitively involved in rioting and looting activity?

As of June 25 2020, the image in the group was covered with a Facebook fact checking flag indicating it was “Partly False Information.” On June 24 2020, LeadStories.com fact-checked the claim and image, writing:

Did Japan spray looters and rioters with blue dye to identify and arrest them later? No, that’s not true: A photo used to make that claim was taken at a pro-democracy protest in Hong Kong in August of 2019. Dyed blue water was not used against those protesters who objected to changes imposed by China. Looting is remarkably rare in Japan and we could find no documented instances of Japanese police spraying looters or rioters with colored dye.

An August 31 2019 news article cited contained the original image, and it reported that the colorful water was used with the intent to later identify protesters in Hong Kong, not Japan:

Hong Kong police fired tear gas at protesters gathered outside government headquarters on Saturday (Aug 31 [2019]), as thousands defied a ban to rally through the city centre.

A water cannon with blue-dyed liquid was also used briefly on a hardcore group of protesters who were throwing rocks and were armed with shields. Blue-dyed water is traditionally used elsewhere in the world to make it easier for police to identify protesters later.

The Associated Press also fact-checked the claim, but did not address the purpose of water dyed blue.

As such, the image of “rioters and looters” in “Japan” being sprayed with “indelible blue dye” for later identification was presented out of-context. The image was taken in Hong Kong, not Japan, and the event was a protest, not a riot or looting. One article indicated water dyed blue was used to identify protesters, but it wasn’t clear how such a system might functionally operate — nor why Americans might want to use it, considering the protesters in Hong Kong (and against whom the dye is apparently being used) are on the side of democracy.