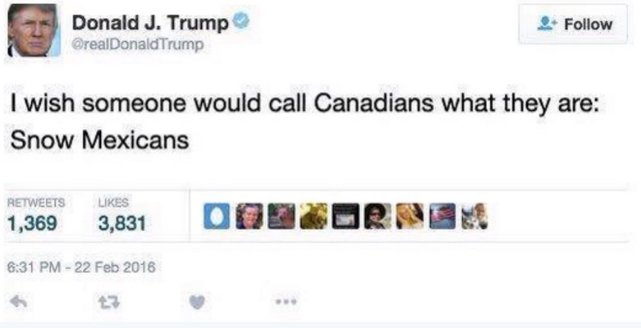 The first giveaway that the tweet isn’t authentic is that the font is different than Twitter’s standard type, which means someone removed the original text and added the comment about snow Mexicans over the top.
And the person who did that used this tweet (the time and date stamp are identical) as a template:

The story got a second wind on June 19th after the website Liberal Darkness published a false report based on the tweet under the headline, “Trump Calls Canadians ‘Snow Mexicans.’ Vows to Build Wall to Keep Them ‘In Canada Where They Belong” that begins:

Angered by Canada’s refusal to seal their border off to ‘foreign radicals’, a fiery Donald Trump today lambasted Canada and vowed to ensure that the ‘snow Mexicans’ and anyone else in Canada would not be able to invade the United States during his watch.

During a highly covered speech in Phoenix, Arizona, Trump energized his voter base and vowed to implement policies that will make America great again.

After the speech, eyewitnesses claim that Trump revealed he plans to build a secondary wall along the Canadian border because the ‘snow Mexicans’ in the North are just as dangerous as the ‘establishment Mexicans’ in the South.  This was a doubling-down of the presumptive Republican nominees words on Twitter.

The story was quickly shared on social media nearly 50,000 times, and again, many believe that Trump had actually called Canadians snow Mexicans — but that’s not the case.