Despite being a public figure for 30 years, Donald Trump was never accused of racism before he ran for the U.S. presidency.

In May 2016, as Donald Trump closed in on clinching the Republican Party’s presidential nomination, his supporters spread a graphic attempting to whitewash (so to speak) his history of racist discourse.

The meme, which pushed the claim that Trump had never been accused of being a racist prior to seeking the presidency, gained attention online after it was shared by Curt Schilling, a former professional athlete who later became a right-wing radio host: 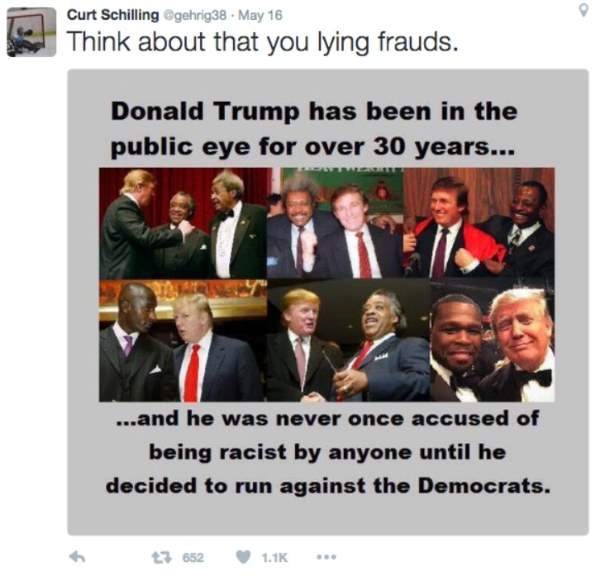 But the accusations against Trump and his father, Fred Trump, had actually dated back decades. In 1973, for instance, the U.S. Justice Department sued the Trump Management Corporation — where the younger Trump served as president at the time — for violating the Fair Housing Act by falsely telling Black prospective tenants that apartments were not available. The New York Times reported on the lawsuit that October:

The case was settled two years later, with the Trumps reportedly promising the department that they would not engage in racist business practices, but not before the future president tried — and failed — to sue the department for $100 million over “false allegations.”

As NPR reported in 2016, the evidence for the case was gathered by the New York City Human Rights Division, specifically testers like Sheila Morse. In one instance in 1972, she said, she was sent to an apartment complex in Brooklyn after a Black resident was told by the building superintendent that an apartment promoted as vacant had actually been taken. According to the story:

When Morse went to the building to ask about the same apartment, she says, “They greeted me with open arms and showed me every aspect of the apartment.”

Morse says she reported her experience to the Human Rights Commission, and then returned to the apartment building. After she was offered a lease, the Black man who had tried to rent the apartment entered the office with a city human rights commissioner, and the three of them confronted the building superintendent.

“He said, ‘Well, I’m only doing what my boss told me to do — I am not allowed to rent to Black tenants,’ ” Morse says.

The commissioner asked the building superintendent to take him to his boss. That turned out to be Trump Management.

Trump was also accused of racism after buying a full-page advertisement in the New York Daily News in 1989 calling for the death penalty for the “Central Park 5,” a group of Black and Latinx teenagers accused of raping and beating a jogger. As the New Yorker reported in 2014:

Perhaps he thought it gave him gravitas, that spring, to weigh in on the character of the teen-agers in the park: “How can our great society tolerate the continued brutalization of its citizens by crazed misfits? Criminals must be told that their CIVIL LIBERTIES END WHEN AN ATTACK ON OUR SAFETY BEGINS!” And his headline suggested what ought to be done with them: BRING BACK THE DEATH PENALTY. BRING BACK OUR POLICE!

The group of teens — Antron McCray, Kevin Richardson, Yusef Salaam, Raymond Santana, and Kharey Wise — were wrongfully convicted and sent to prison before the person who actually attacked the victim came forward, leading to the release of the “Central Park 5” in 2002.

Two years after he bought the Daily News ad, John O’Donnell — a former executive at a casino owned by Trump — ccused him of “making slurs against Black people” in his book Trumped.

One excerpt from the book shared widely by news outlets involved Trump complaining about a Black executive at Trump Plaza. Trump was quoted as saying:

O’Donnell wrote in the book that he advised Trump against publicly espousing such views.

Trump was also fined $200,000 by the Casino Control Commission after managers at the Trump Plaza casino removed a Black dealer from a table at the request of Robert Libutti, a patron who reportedly boasted about being connected to mafia boss John Gotti. As United Press International reported in October 1992, an appeals court in New Jersey upheld the penalty:

Libutti, a race horse broker, lost millions of dollars in Atlantic City. Witnesses testified that managers at several casinos would transfer both Black and women dealers to other tables.

A two-judge panel said most of the witnesses for the Trump Plaza were high-ranking executives who had “an identity of interest” with the casino, while many of those who testified for the Division of Gaming Enforcement were current employees who were risking their jobs by testifying against their employer.

“In our view, the transcript fairly reeks of Trump Plaza’s guilt,” the judges said.

Schilling’s attempt to claim that Trump — who won the presidency in 2016 but lost to Democrat Joe Biden four years later — had never been accused of racism was demonstrably false even by the time he began running for office; it was Trump who egged on the “birther” conspiracy theory claiming that Barack Obama was ineligible for the presidency. And Trump literally began his campaign by stirring up xenophobia against immigrants from Mexico.