The Centers for Disease Control and Prevention (CDC) and the United Nations (UN) were forced to admit in 2014 that the Ebola virus had "gone airborne" and could be contracted by breathing in germs.

The concerns in the United States over the potential spread of the Ebola virus in 2014 provided an early window into how social media could be roiled with disinformation.

In one example, bloggers and memes alike pushed the claim that the Centers for Disease Control (CDC) and the United Nations (UN) had conceded that the virus could “go airborne” during an outbreak at the time: 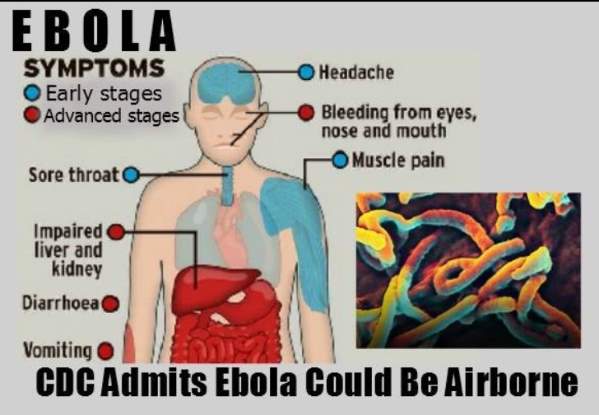 The bogus claim spread though various distortions of statements from both agencies, such as an October 2014 tweet that read, “Ebola is spread through droplets. If person [with] Ebola sneezes & saliva/mucus contacts person’s eyes/nose/mouth, it may be spread”:

English right-wing blogger Paul Joseph Watson, foreshadowing future health-related disinformation on his part, similarly claimed that CDC advisories showed a shift in the agency’s treatment of the virus. He wrote:

The advisory urges airline staff to provide surgical masks to potential Ebola victims in order “to reduce the number of droplets expelled into the air by talking, sneezing, or coughing.” (emphasis mine).

The CDC is also directing airline cleaning personnel to, “not use compressed air, which might spread infectious material through the air.” (emphasis mine).

Other posts were based on a story by the English newspaper The Telegraph, which paraphrased a remark by Anthony Banbury, who headed the UN’s response to the virus’ spread at the time.

“The longer it moves around in human hosts in the virulent melting pot that is West Africa, the more chances increase that it could mutate,” Banbury said. “It is a nightmare scenario [that it could become airborne], and unlikely, but it can’t be ruled out.”

Bad actors using this quote to fearmonger about the virus, however, failed to note a remark by David Heymann, a professor of infectious disease epidemiology at the London School of Hygiene and Tropical Medicine as well as the head of Public Health England, an agency under the country’s Department of Health and Social Care.

During a panel discussion in London, Heymann said that a virus transmitted via droplets had never evolved into a respiratory virus.

“There is no evidence that this has ever occurred in the epidemiology,” Heymann said.

The newspaper also quoted Dr. Jeremy Farrar, a medical researcher and head of the research foundation Wellcome Trust, who criticized the disinformation and misinformation spreading at that time:

The chances of Ebola becoming airborne are extremely small. I am not aware of any viral infection changing its mode of transmission. It’s important we retain a sense of proportion and not exaggerate the risks for it changing and becoming airborne. There is already enough fear and panic surrounding this epidemic

The common thread in this string of disinformation was blurring the lines between diseases that spread via contact through droplets and the true definition of an airborne disease; the CDC itself released a graphic explaining the difference:

According to the agency:

Airborne spread happens when a germ floats through the air after a person talks, coughs, or sneezes. Germs may land in the eyes, mouth, or nose of another person.

If a germ is airborne, direct contact with the infected person is NOT needed for someone else to get sick. Airborne spread diseases include: chickenpox, tuberculosis.

Droplet spread happens when germs traveling inside droplets that are coughed or sneezed from a sick person enter the eyes, nose, or mouth of another person. Droplets travel short distances, less than 3 feet (1 meter) from one person to another.

A person might also get infected by touching a surface or object that has germs on it and then touching their mouth or nose. Droplet spread diseases include: plague, Ebola.

The outbreak, which was first reported by the World Health Organization in southeastern Guinea in March 2014, led to more than 28,000 cases — including 11,325 deaths — across West Africa before it was finally declared two years later. Eleven people in the U.S. were treated for the virus during the outbreak, with no deaths reported.

A May 2020 study by researchers at the Johns Hopkins Center for Health Security examining just over 3,000 tweets from September 30 to October 30 2014 provided a window into how prevalent the swirl of disinformation was around the outbreak:

In December 2019, the Food & Drug Administration approved its first U.S. vaccine for use against Ebola.