In June 2020, as protests against ongoing racism and police brutality continued throughout the United States and beyond, a curious image appeared: 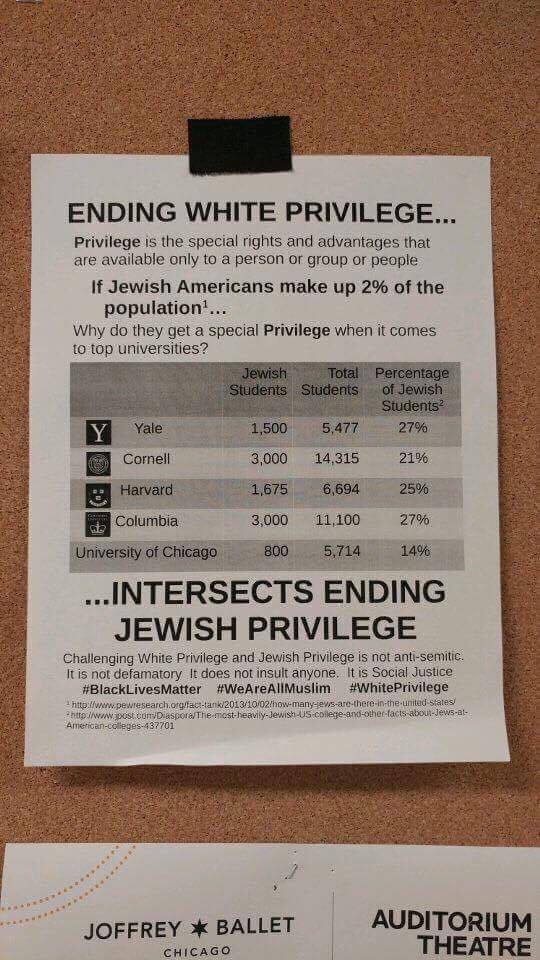 The image showed a flyer taped to a cork board with text that said:

If Jewish Americans make up 2% of the population…

Why do they get a special Privilege when it comes to top universities?

The flyer then showed a graph with five schools (Yale, Cornell, Harvard, Columbia, and University of Chicago) with their purported number of Jewish students and how their numbers correlated to the student body overall, citing a 2015 story (“The most heavily Jewish US college and other facts about Jews at American colleges”) from The Jerusalem Post for its figures, and concluded:

Challenging White Privilege and Jewish Privilege is not anti-semitic. It is not defamatory. It does not insult anyone. It is Social Justice.

The image of this flyer is not new as of 2020. A reverse image search clearly shows that this photograph, like the commentary, is recycled content from 2017. It did not go unnoticed then, either; The Algemeiner Journal, a newspaper that focuses on stories about Jewish people all over the world, covered one version of the flyer that bore much of the same language:

Jewish students at the University of Illinois at Chicago (UIC) were rattled this week by fliers that were distributed on campus reading, “Ending White Privilege Starts With Ending Jewish Privilege,” The Algemeiner has learned.

“Singling out any religion or race, in this case, Jews, is not right,” UIC student Joseph Sepiashvili said of the fliers, which appeared on Tuesday, that depict a pyramid of “privilege” — with Jews at the top, labeled by Stars of David and described as unfairly and disproportionately successful.

“Is the 1% straight, white men? Or is the 1% Jewish?” the fliers ask, citing Pew Forum studies.

Students have said the fliers — whose creator and distributor remain unknown — are reminiscent of Nazi-era propaganda.

The Anti-Defamation League addressed the rumor on June 8 2020:

The claim that Jews are able to manipulate institutions, including universities, to benefit themselves at the expense of non-Jews, is a classic antisemitic trope.

As of this writing, there is no indication that any Black Lives Matter activists have shared, printed or distributed these fliers during the current protests. Nevertheless, the fliers may have the effect of driving a wedge between Jews and Black Americans.

Speculation about this antisemitic flier comes at a time when other fliers promoting conspiracy theories are also circulating online, including some alleging that George Soros is involved in fomenting street violence.

That article pointed out that the flyers were the subject of a March 2017 article in Chicagoist:

The latest batch of flyers (see below) were found in a UIC library on Saturday, just four days after posters that read “Ending white privilege starts with ending Jewish privilege” were discovered on campus.

Flyers found on Saturday—which were shared with Chicagoist by UIC student and Rohr Chabad House president Eva Zeltser—featured statements such as, ” …But when you question the 6 million they put you in jail in 17 countries,” in reference to the Holocaust, and “The largest Concentration Camp in the world today is owned and operated by Zionists,” which compares Gaza to Auschwitz. Some of the flyers also included the hashtag phrases #BlackLivesMatter, #WeAreAllMuslim and #StandWithPalestine.

One was tacked on a bulletin board “for everyone to see,” Zeltser said.

Kofi Ademola, an activist with Black Lives Matter Chicago, denounced the flyers as racist and said they misrepresent the BLM movement. “We’ve noticed a disturbing new trend where people have been using language from social justice circles to hide their racist agenda,” Ademola said in part in a statement to sent to Chicagoist. “These posters placed all over UIC’s campus are just another example of such an occurrence… What their saying and how they’re framing their assertions are divisive, inflammatory and based in falsehoods.”

A June 2020 Twitter thread by user @AbominableScot delved into the origins of the flyers, tracking them down not to any left-wing organization but to 4chan’s notorious /pol/, where more than three years before, an account claiming to be their original creator posted high-resolution versions, and exhorted others to download and distribute them:

The OP posted multiple threads 3/20-21/2017 with links to these fliers on pdf-archive.https://t.co/7ElBmyy8iJhttps://t.co/EJB7OGs6KOhttps://t.co/Rz5pwLEmNb

The files seem to be the original, full-res images.https://t.co/43CpQFGFQN pic.twitter.com/HB43eyNYNO

Those archives, from March 2017, included the following image: The image of this flyer — for which a poster on /pol/ took credit in March 2017 — is neither new nor original as of June 2020. Instead, it appears to be getting recirculated as part of yet another effort by the far right to sabotage the Black Lives Matter movement.