"There's a garden in England dedicated entirely to plants that are deadly and can kill you. It's the most dangerous garden in the world. It holds over 100 killers [such as hemlock], strychnine, and nightshade."

On June 21 2020, the Facebook page “The Runic Witch” shared the following meme, which described a garden in England “dedicated entirely to plants that … can kill you”:

At the bottom of the meme was a photograph of a black gate, the archway of which read “The Poison Garden.” Both doors featured a skull and crossbones symbol and the words “these plants can kill.” Text at the top read:

There’s a garden in England dedicated entirely to plants that are deadly and can kill you. It’s the most dangerous garden in the world. It holds over 100 killers [such as hemlock], strychnine, and nightshade.

The Alnwick Garden is a “complex of formal gardens” not far from the Scottish border. It contains a number of sub-sections, including a massive treehouse, a cherry orchard, a bamboo labyrinth, and water features: 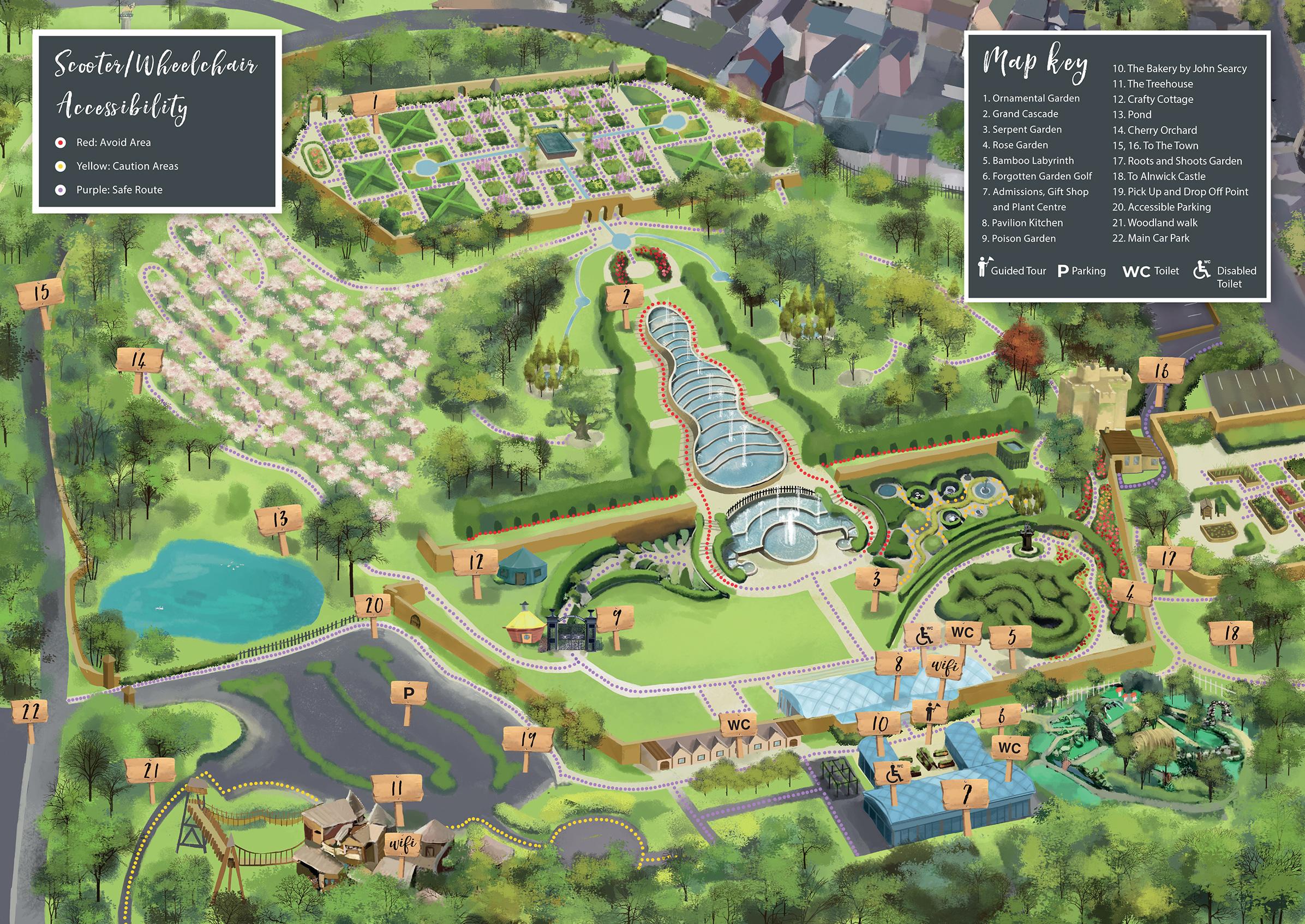 Number nine on the above “Map Key” is marked to the left of the center fountain, and a rendering of the iron gates seen in the meme is visible.

The Poison Garden was added in 2005, and a page on the Garden’s visitor site says of the deadlier plant section:

The Alnwick Garden plays host to the small but deadly Poison Garden—filled exclusively with around 100 toxic, intoxicating, and narcotic plants. The boundaries of the Poison Garden are kept behind black iron gates, only open on guided tours.

Visitors are strictly prohibited from smelling, touching, or tasting any plants, although some people still occasionally faint from inhaling toxic fumes while walking in the garden.

An archived version of the page shed a bit more light onto the garden’s creation:

It’s not often that the Home Office becomes involved with plants in the setting of a public garden, but in this instance a number of the ‘inmates’ have to have their very own license in order to be there at all.

Many of the plants are already well-known for their medicinal properties, but as its creator, the Duchess of Northumberland said:

‘I wondered why so many gardens around the world focused on the healing power of plants rather than their ability to kill… I felt that most children I knew would be more interested in hearing how a plant killed, how long it would take you to die if you ate it and how gruesome and painful the death might be.’

Another since updated section, titled “Intoxicating inhabitants,” described some of the plants growing in the garden as the ones mentioned in the meme:

There are over 100 plants of varying deadliness grown in the Poison Garden. Some of the plants are beautiful despite being deadly, and other look so harmless it is hard to imagine their dangerous, even fatal, qualities.

Nux vomica’s Latin name implies much, but it perhaps rings more bells as strychnine. Interestingly, hemlock, a poison in its own right, can be used as an antidote to Strychnine, but don’t tell Socrates, who was sent to his death with a cup of hemlock.

Those of a certain age will be familiar with Castor Oil, which is made from the plant Ricinus communis, but a single seed from the same plant will kill an adult in the most horrible way. Ricin causes nausea, severe vomiting, convulsions and subsequent disintegration of the kidneys, liver and spleen…

In 2014, Smithsonian Magazine profiled the Poison Garden and spoke to Jane Percy, the Duchess of Northumberland about the macabre project’s inspiration:

The duchess thought she might want to include an apothecary garden, but a trip to Italy set her on a slightly different course. After visiting the infamous Medici poison garden, the duchess became enthralled with the idea of creating a garden of plants that could kill instead of heal. Another trip—this one to the archeological site of the largest hospital in medieval Scotland, where the duchess learned about soporific sponges soaked in henbane, opium and hemlock used to anesthetize amputees during 15th-century surgeries—reinforced her interest in creating a garden of lethal plants.

“I thought, ‘This is a way to interest children,'” she says. “Children don’t care that aspirin comes from a bark of a tree. What’s really interesting is to know how a plant kills you, and how the patient dies, and what you feel like before you die.”

“What’s extraordinary about the plants is that it’s the most common ones that people don’t know are killers,” the duchess says. Visitors are often surprised to learn that the laurel hedge, nearly ubiquitous in English gardens, can be highly toxic. But some visitors have had experience with laurel’s sinister side—the duchess has heard a few talk about how, after loading up their cars with pruned laurel leaves to take to the dump, drivers have fallen asleep behind the wheel of their car from the toxic fumes the branches emit.

In the meme, plants in the nightshade family (which also contains potatoes, tomatoes, and eggplant) were mentioned. In the article, a more specific explanation appeared alongside a detail about the garden’s other interesting inhabitants:

As part of the Poison Garden’s educational mission, the duchess grows a variety of drugs, from cannabis to cocaine (derived from the leaves of the coca plant), which she and garden guides use as a jumping-off point for drug education. “It’s a way of educating children without having them realize they’re being educated,” she says.

Other poisonous plants might be less well-known to visitors, but are no less potent. One of the duchess’s favorite plants is Brugmansia, or angel’s trumpet, a member of the Solanaceae family (which includes deadly nightshade) that grows in the wild in South America. “It’s an amazing aphrodisiac before it kills you,” she says, explaining that Victorian ladies would often keep a flower from the plant on their card tables and add small amounts of its pollen to their tea to incite an LSD-like trip. “[Angel’s trumpet] is an amazing way to die because it’s quite pain-free,” the duchess says. “A great killer is usually an incredible aphrodisiac.”

As such, the “Poison Garden” meme was both popular and largely accurate. The Poison Garden is a sub-attraction as part of the larger Alnwick Garden, and it is grown behind the depicted, imposing iron gates. Among the deadly plants in it are hemlock, Nux vomica (strychnine), and Ricinus communis (ricin).