A photograph shows a "shooting target" for police training and the target is an individual holding a phone as if recording video.

Amidst ongoing nationwide protests over the death of George Floyd, Facebook user Charlie Sickles shared the following post on June 21 2020, which had a photograph of a purported “shooting target” of a figure which appeared to be recording with a phone:

Captioned “You say there’s not a problem with police brutality,” the screenshot seemed to show a tweet by the account @CopWatchSTL. No date was visible on the tweet when it was shared to Facebook. We were able to find the tweet, which was originally shared on December 8 2019:

This is a shooting target on display in the “police supply” section of a gun store in Lexington, Kentucky. pic.twitter.com/7ZlQGhTpn7

As on Facebook, text alongside the tweet’s image read:

This is a shooting target on display in the “police supply” section of a gun store in Lexington, Kentucky[.]

Visible in the image of a target holding a cell phone was the name of a company: Triumph Systems. The item seen in the photograph was available for purchase on the company’s website in June 2020, described as “Threat/No-Threat Double Sided Targets (10-Targets)” and “specifically designed targets for use with our Pivotal Trainer.”

It’s true the figure held what looked to be a cell phone on one side of the double-sided target. But on the reverse was a different image, presumably the “threat” of the duality: 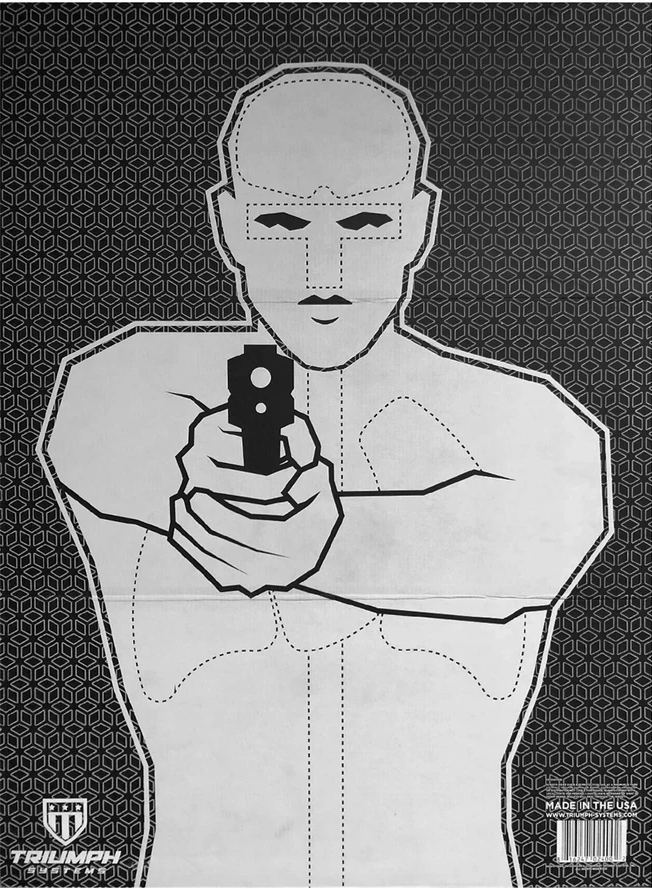 One of the most common problems for shooters is that they are not properly trained for stressful situations. The Pivotal Trainer turning target system increases stress in training by providing time performance, as well as “threat / no threat” cognitive decision making requirements. Developed with a Navy SEAL, the patent pending technology eliminates anticipation and forces the shooter to use discretion before acting. With the push of a few buttons, the shooter can set this wireless devise to random presentation intervals or use the manual mode while training with another.

On Triumph Systems’ Facebook page, a user commented on an unrelated post on December 8 2019, referencing the cell phone image and the tweet. In response, Triumph Systems responded specifically to social media discourse about the target in early December 2019:

Yes, that is our turning target training system – the Pivotal Trainer. It must not have been operating when you saw it in the L/E section, and that is unfortunate because the other side of this two-sided target is the same silhouette, but with a pistol and not a cell phone. The Pivotal Trainer turns the target either way, at random, forcing the person training to discern what is being presented to them and respond appropriately, i.e., engage with the threat and do not engage the person with the cell phone. In a high stress scenario, you revert to your level of training, so if you only train by pointing and shooting, you are missing the most important thing to do in a real-life scenario: use discretion and only engage a real threat. That’s what the pivotal trainer is for, and that’s why law enforcement across the country are starting to use these in their training. It makes everyone safer. Thanks for your concern!

When the image began circulating again on June 21 2020, it was against the backdrop of a national discussion about police brutality in the United States. The tweet shown here came before June 2020 protests, and the image itself lacked context about the product shown. Its specific purpose and design was to train armed people to quickly assess whether the target did not pose a threat (holding a cell phone) or vice versa (pointing a pistol at the shooter.)