Quizzes and question posts (often shared by purported radio stations) are not as innocent as they look, and you should avoid engaging with them entirely.

Wheaton’s post was attributed to Paul Belserene; Belserene originally shared the text on September 19 2021. It was one of many posts about Facebook data mining posts and the form they might take in September 2021, and consisted of seven bullet points.

1. You see a fun little question pop up in your facebook feed that people answer in the comments. This isn’t a question from one of your facebook friends, it’s from a public account, maybe an account supposedly belonging to a radio station, but not one in your part of the country, where you definitely recognize the station. Maybe it’s from a public account called something cute like “just for laughs” or “no biggie” or “memory lane.” Maybe a facebook friend of yours has already answered the question. It seems harmless and trivial: What food would you never eat? What was the first concert you went to? You answer the question in the comments.

4. Some of these questions really are probably harmless, but the more you answer, the more you see, and sooner or later you slip up and answer one or more that help a data miner begin putting together pieces of information that help them steal your identity and get into your bank accounts. “One of these has to go” with a list of four types of candy bars isn’t helpful to anyone, but the more you get used to answering questions, the less carefully you scrutinize the questions. One day you answer one that gives someone your birth year: “how old would you be if the digits in your age were reversed.” A week later you’ve forgotten about that, but the information has been harvested and filed away and you answer another question that gives them your month of birth: “your birth month determines which celebrity you marry, are you happy?” with a bunch of pictures of famous people laid out in a calendar grid. Some questions are straight up complete answers to common security questions: maiden names, grandparents’ names, where you vacationed as a kid, what was your first car, what was your first pet’s name, what was the name of your elementary school.

From there, the warning addresses how a breadcrumb trail of engagement on your part can compromise the security of everything from your Facebook account to your IRS-issued tax refund:

5. When the data miner pretending to be a harmless fun facebook account or radio station has enough pieces of the puzzle put together they can either get into your bank account, sell your information to someone else who wants to get into your bank account, or remotely lock your accounts or take over your whole computer or phone and force you to pay a ransom to get access back. They can impersonate you and steal your tax refund. They can commit social security fraud, pretending to be you, and disappear with the check while you are left to prove it wasn’t you.

6. The worst thing about these social media predators is that the more you comment on these information gathering quizzes, even if you just comment to tell a friend that they have potentially given away the answer to their own security question, the more they spread. All your facebook friends will see more of these quizzes as a result of your comment, and be more likely to comment themselves, and sooner or later one of them will give away important information, even if you never do.

7. So DO NOT COMMENT. Not even to the ones that really don’t share any important information. They post many innocuous questions for every one that actually gathers information, but even the seemingly benign ones help them figure out what style of questions generate the most responses, work the algorithm to get them on more people’s facebook feeds, and lull you into a false sense of security that this is good clean fun. Do not give it a thumbs up or an angry face. If you see a friend post in response to one, talk to them in person about how these work, or call them, or send them a private message, but don’t reply back to their comment on the actual post. That just helps these things spread.

Another post addressed some of the phenomenon being discussed in the excerpt above, but with respect to engagement begetting additional engagement:

Seeing right wing shit in your feed because your friends have to post their stupid hot take on it?

“This is 100% by design. Facebook changed their algorithms to show content that gets a lot of engagement. What people don’t get is that when they make their snarky comment on some right wing shit, nobody will ever see it except their own friends. But it also encourages Facebook to show that post to even more people because it counts as engagement and bumps it up in the algorithm.

STOP COMMENTING ON RIGHT WING SHIT, PEOPLE. Stop sending it to people, stop sharing it (even with snarky commentary), stop emojing it. I know it feels good to have some witty comeback. But anything you do other than ignore it or click “hide” just counts as “engagement” (which is all Facebook and their advertisers care about) and tells the Facebook algorithm to spread that shit farther and wider.”

While the warning or caution was for different reasons, the underlying mechanism was the same as Wheaton’s post — engagement of any kind, good or bad, boosted posts and made them visible in places they otherwise might not be seen. Both posts were similar to a September 7 2021 post made by user Jeff Hirsch, which was shared over 14,000 times:

Had a bit of an a-ha moment this morning when considering all those data mining “survey” posts facebook has been flooded with lately.

I realized that I should end my practice of leaving humorous or smart-ass responses to those questions because my comments are just going to be used to map the connections between me and my socially networked friends.

Here’s what I suggest…

Ignore these posts asking about your “first car” or your “favorite color” or the “last thing you ate” or the “last show you watched”. Don’t comment, don’t reply, don’t click on the links, don’t engage at all.

While they may look like an innocent radio station survey or other mild amusement, they are actually part of a vast data mining and consumer profiling industry.

Stop giving them all of your consumer data. (Last purchase, what you just ate, what show you just watched, etc.)

Stop showing them the connections between you and your friends by not commenting at all.

Facebook is free because their entire business model is based on selling your data to their advertisers. Keep that in mind as you interact with the site on a regular basis.

You aren’t the customer. You are the product.

Around the same time, a popular meme addressed the idea that Facebook question posts were a data mining operation. It contrasted how people “think they get hacked” with how they “really get hacked,” with the posts in question showcased at the bottom (and this had been in circulation since at least June 2021): 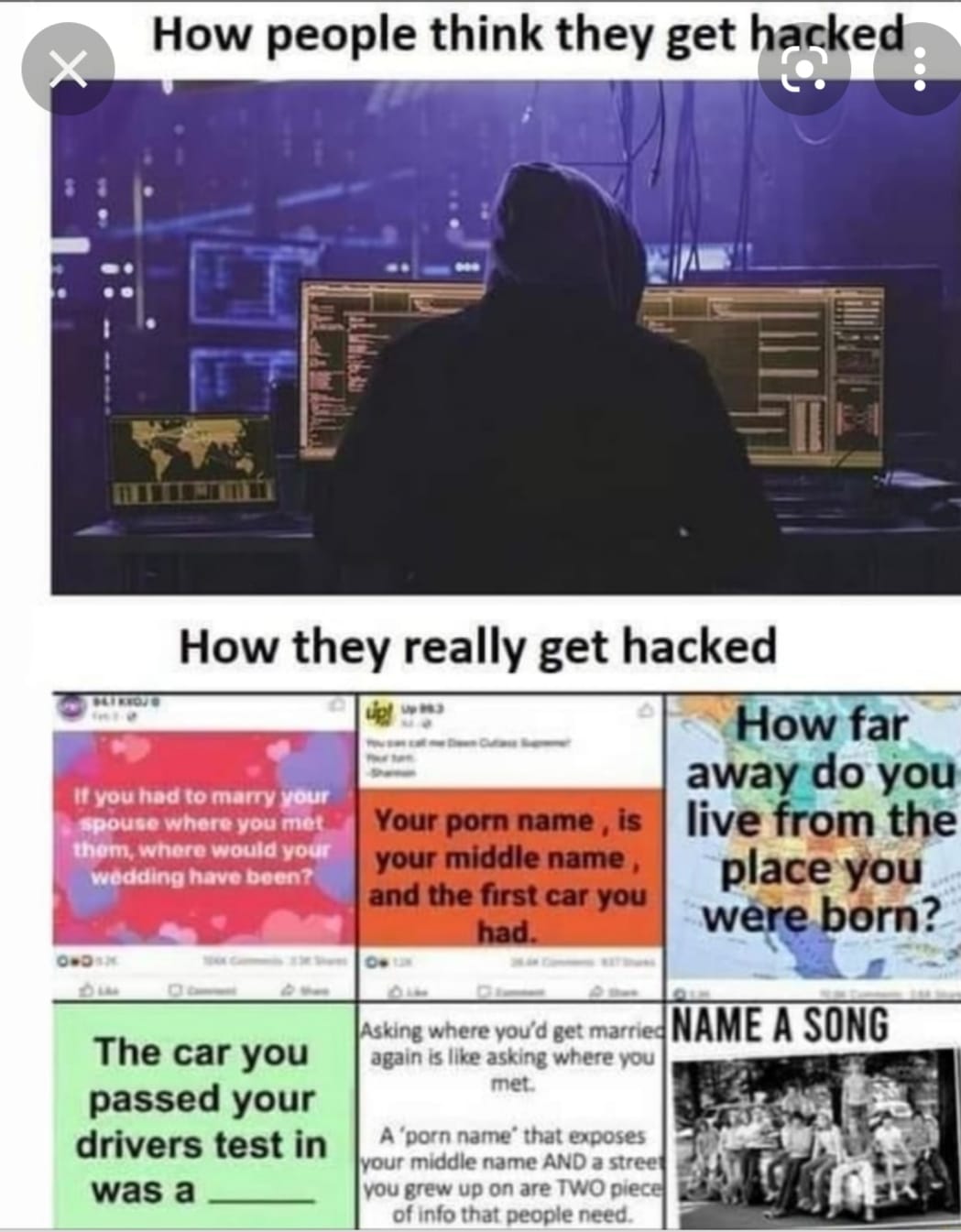 A Facebook search for “radio station question data mining” returned another large set of examples of the posts being discussed: 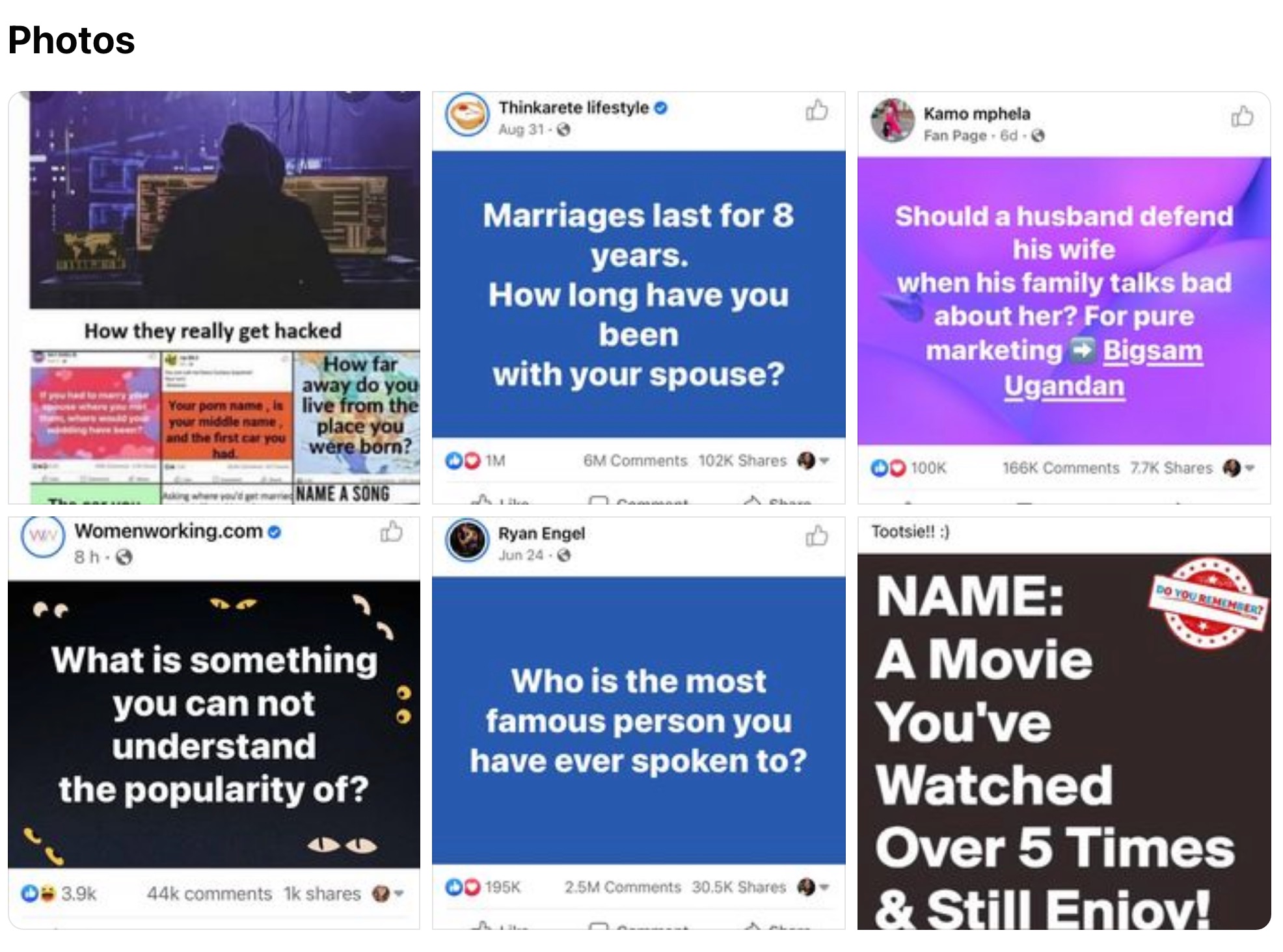 Yes, the Posts Should Be Ignored — But Facebook and Criminals Are Secretive

Many of the quoted posts warn that criminals slowly compile your activity to whittle down answers to security questions. It’s difficult to “fact check” that part, due to the secrecy of criminal activity.

Likewise, Facebook is notoriously opaque about its algorithms and how they influence content to which users are exposed. A February 2021 Consumer Reports article, “Tech Companies Too Secretive About Algorithms That Curate Feeds, Study Says,” explained:

Later [in February 2021], your Facebook feed will start looking less political. The company says it’s testing a tweak that will surface fewer politics-related posts in users’ feeds, in a bid to keep political content from “taking over” what people see—an adjustment Facebook says users often ask for.

But it’s not clear what the change will look like. In its announcement and in comments made to Consumer Reports, Facebook didn’t share any details about how its systems would assemble the new feeds, or even decide what counts as political content. And if you like your feed just the way it is, well, too bad—you don’t have a say in the matter.

That’s almost always the case when tech companies tweak their algorithmic decision-making systems. These are the systems that determine which products people see when they search for a power drill; what they learn about vaccinations, rolling blackouts, or election results from social media or Google search results; and which of their friends’ posts they see at the top of their feeds—plus the posts they never notice because they are buried so deep.

We know that Facebook’s algorithms govern what we do and do not see, and that those algorithms are both ever-changing and secretive. By design, we cannot definitively say the claims about engagement are true — but we can say that anecdotally, readers report seeing an increase in random question-based posts — from entities like obscure radio stations — as of September 2021.

We have long advised avoiding engagement bait regardless of direct risk. Engagement bait is rarely valuable, and it can easily be exploited in a number of ways.

Facebook “data mining” discourse got a boost when Wil Wheaton copied and pasted a post by Paul Belserene in September 2021. Facebook does not disclose how its algorithms work, but it’s safe to say that the crux of the post and memes was true. Social media users should avoid engagement bait, even if it does not appear to pose a direct risk. It remains possible that the high-engagement posts could be mined for compromising information, but overall, engagement bait is bad for social media.