Evil Faces in Pictures From the Destruction of the  World Trade Center-Not a Hoax!

Summary of eRumor:
A couple of pictures are circulating on the Internet from the attack on the World Trade Center on September 11, 2001, that seem to have evil-looking faces in the smoke.  Faces of Satan?
The Truth:
We have classified this as “Not a hoax” rather than Truth! or Fiction! because the main concern of our readers is whether the pictures have been doctored in any way.  From the information we have been able to gather so far, the pictures have not been changed or altered.
Whether you believe there are evil faces in the smoke is a matter of perception and whether you believe there is any significance to them is a matter of belief.
CLICK HERE to see the pictures.
One of them is from the Associated Press and is the first picture they sent to their subscribers of the events at the World Trade Center.  Photo assignment editor Barbara Woike was on duty at the time and received the picture from photographer Mark Phillips, who has been a trusted free-lancer with AP for many years.  Woike says Phillips was on a rooftop in nearby Brooklyn Heights and that the picture was taken after the first aircraft had hit the first tower.  The bottom line is that she says the picture came very quickly from a trusted source and was sent from AP just as quickly and there was no doctoring by anyone to create a face.
The second picture is from a piece of video and has not been doctored. 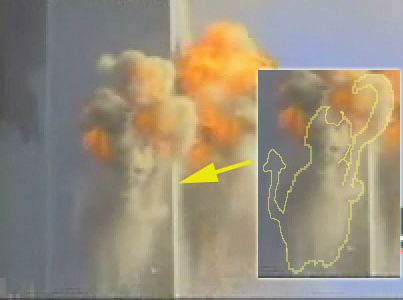