A Facebook post purportedly showing “fireflies photographed in trees with long time exposure” was shared on May 28 2021 to the Facebook group “Weird, Fantastic, Beautiful and Odd,” but soon spread outside its confines: 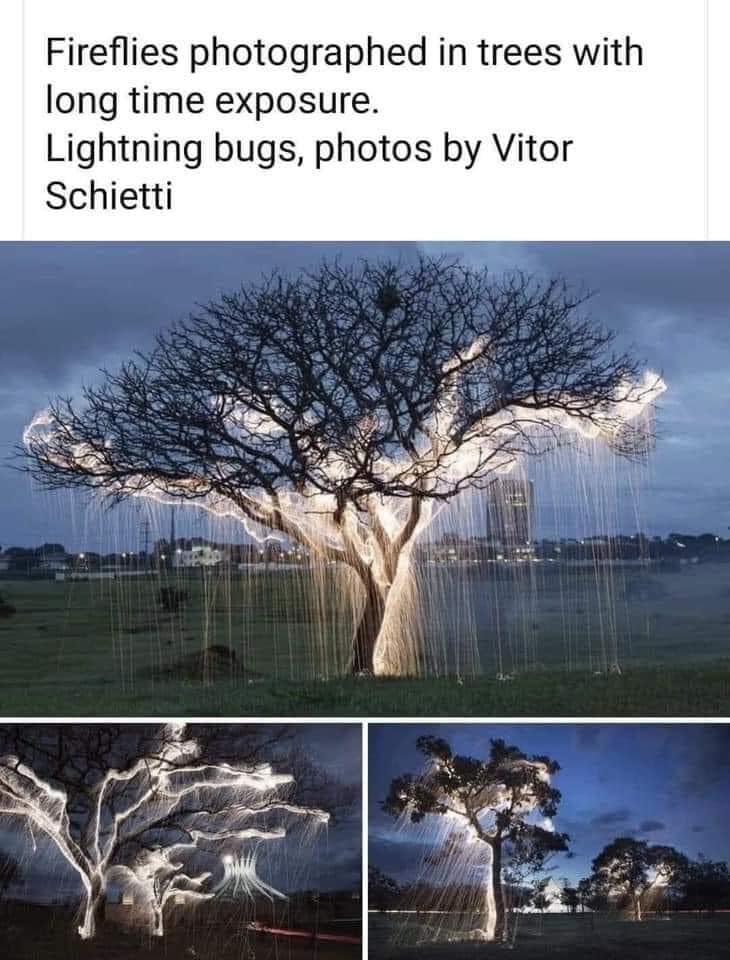 In that variation, a set of three images was condensed to a single screenshot. No source for the original post was included, but vestigial text in the screenshot read:

A reverse image search using Google populated the same string of text, “fireflies photographed in trees with long time exposure.” One result returned appeared to be the content seen in the screenshot, an April 2021 tweet with text matching that on the image:

On April 6 2021, the images and title were shared to Reddit’s r/pics and r/interestingasfuck (the latter bearing flair noting that the post had orginally appeared on r/all):

Fireflies photograph in trees with long time exposure. from interestingasfuck

In the same week, the image and title were shared to r/LongExposurePics and r/photoshopbattles. Although most Reddit commenters across threads didn’t question the explanation, one r/pics user replied:

???Those arent fireflies, another redditor posted this a few days ago and told us it was long exposure with fireworks

Of all the Reddit threads about the image set, users on r/interestingasfuck were the most skeptical of the claim — asking if all the fireflies “dropped dead” in a “straight line.” Another commented:

As it turned out, the skeptics were correct. A March 2021 art news site did not mention fireflies in its coverage of the installation (“Illuminated Streaks Appear to Fall from Trees in Light Paintings by Photographer Vitor Schietti,”) and MyModernMet.com definitively disproved the virally popular explanation in April 2021.

In “Dancing Light Paintings Contour Nature With Fiery Streaks of Illumination,” the site provided a who, what, when, where, and why for the images:

Light is beautiful yet ephemeral. And photography, at its core, is about light; the practice takes its name from the Greek words phos meaning “light,” and graphê, meaning “drawing.” Brazilian photographer Vitor Schietti has fully embraced the nature of light in his work. In 2015, he began a series entitled Impermanent Sculptures that incorporates a technique known as light painting to surround trees and other natural objects with fiery streaks of illumination. These glowing landscapes evoke the magic of fairy trails, but they are the result of a delicate photographic process.

To create his light paintings, Schietti must perfectly time his exposures. After choosing a location, the photographer uses fireworks to produce streaks of light that are captured with a slow shutter speed. Sometimes a single shot is all he needs to cover a tree in energetic illumination. However, he also composites images together using Photoshop for maximum effect. According to Schietti, capturing an image is a precise dance of timing. “I use a neutral density filter to find the perfect balance between the brightness of the sparkles and the natural light by twilight, so it’s a fine and limited balance, only a few minutes each day.”

Schietti’s “Impermanent Sculptures” series was visually striking on its own, and attaching the “fireflies photographed in trees with long time exposure” story to social media posts seemed unnecessary. Nevertheless, the inaccurate explanation was sufficiently popular to create a Google autosuggestion, and to push actual reporting on the images and their composition below Reddit threads, Facebook posts, and tweets featuring the inaccurate claim.