On May 31 2021, a long-circulating rumor about Solo cups’ “measuring lines” re-emerged on social media:

How old were you when you found out these lines are actually measurements? pic.twitter.com/CLybjek6y6

The person who shared the image invoked the “today years old” meme, asking others how old they were when they learned Solo cup lines were “actually measurements,” and no citation aside from the image accompanied the tweet.

On Reddit, the claim appeared at least four times that we could find, and likely several more — we’ve seen this rumor around for many years. A 2012 post to r/YouShouldKnow involved a similar diagram, stating users should know “that the lines on a Solo cup are for measuring,” “alcoholic beverages” specifically:

Just as unsourced was a top comment on that thread, claiming that a Solo brand employee had debunked the claim:

Yeah, this was a few days ago when the guy from the Solo factory came in and schooled everyone that if this is correct, it’s a coincidence, they are for structural integrity.

In May 2015, iterations of the claim were shared to r/AutoDetailing and r/drunk. The second post embedded an Imgur post featuring a more polished presentation for Solo cup measurement lines: 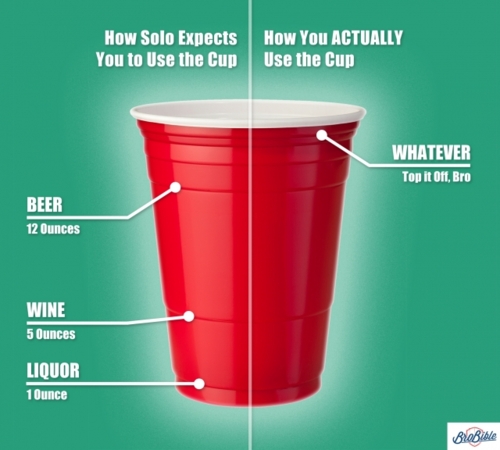 By May 2020, a post to r/coolguides indicated that the meme had evolved to

What Solo Cup lines are purported to measure, and what Dart (maker of Solo) suggests you use them for from coolguides

The first version of this claim we located was from 2012. At that time, WWJ-TV quoted a representative of Solo cup-maker Dart Container Corporation, who stated the Solo cup lines were not for measuring anything:

The lines on our Party Cups are designed for functional performance and are NOT measurement lines. If the lines do coincide with certain measurements, it is purely coincidental.

According to Margo Burrage, director of communications for Dart Container Corporation, the parent company of Solo’s cups, the lines on the signature cup were a purposeful part of the design, but for a variety of reasons.

“The design of the first SOLO cup was very intentional. When SOLO designed the iconic red cup in 1976, every detail served a purpose and still does to this day,” Burrage wrote in an email. “The rolled rim makes it easier to sip your drink, but also prevents a stack of SOLO cups from sticking together. The indented base makes the cup sturdier and less likely to crack. And those extra lines keep your fingers from slipping while holding the cup. So while the lines weren’t meant for measurement, they were a quite purposeful part of the design.”

Posts about Solo cup measuring lines were a social media perennial, seemingly appearing each May (as the school year traditionally winds up and graduation season begins.) Solo’s parent company Dart Container Corporation began addressing the claims in 2012, explaining that the cups were designed with “structural integrity” in mind, and any correlation to volume measurements were coincidental.