In February 2022, the "first article of impeachment [was] laid out against Joe Biden."

On February 9 2022, Trendolizer identified an article that was purportedly (and partly) headlined, “First Article of Impeachment Laid Out Against Joe Biden.” 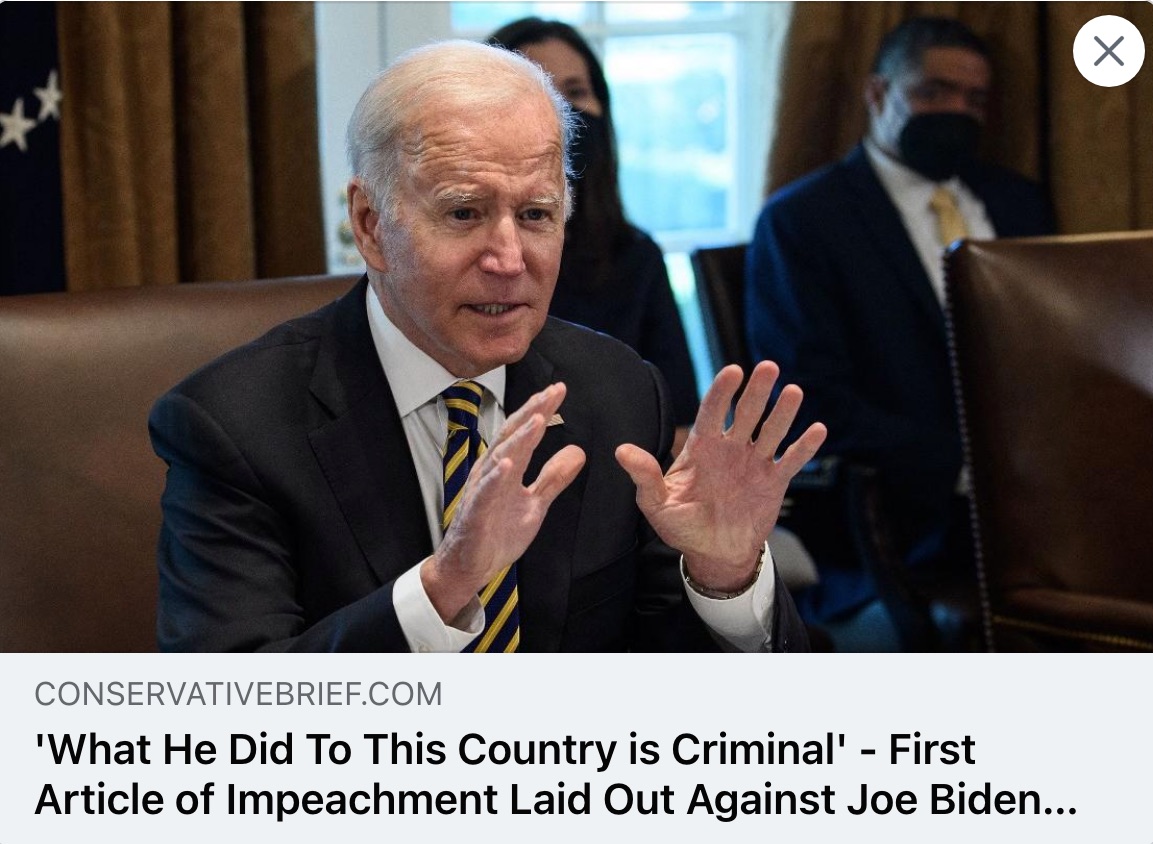 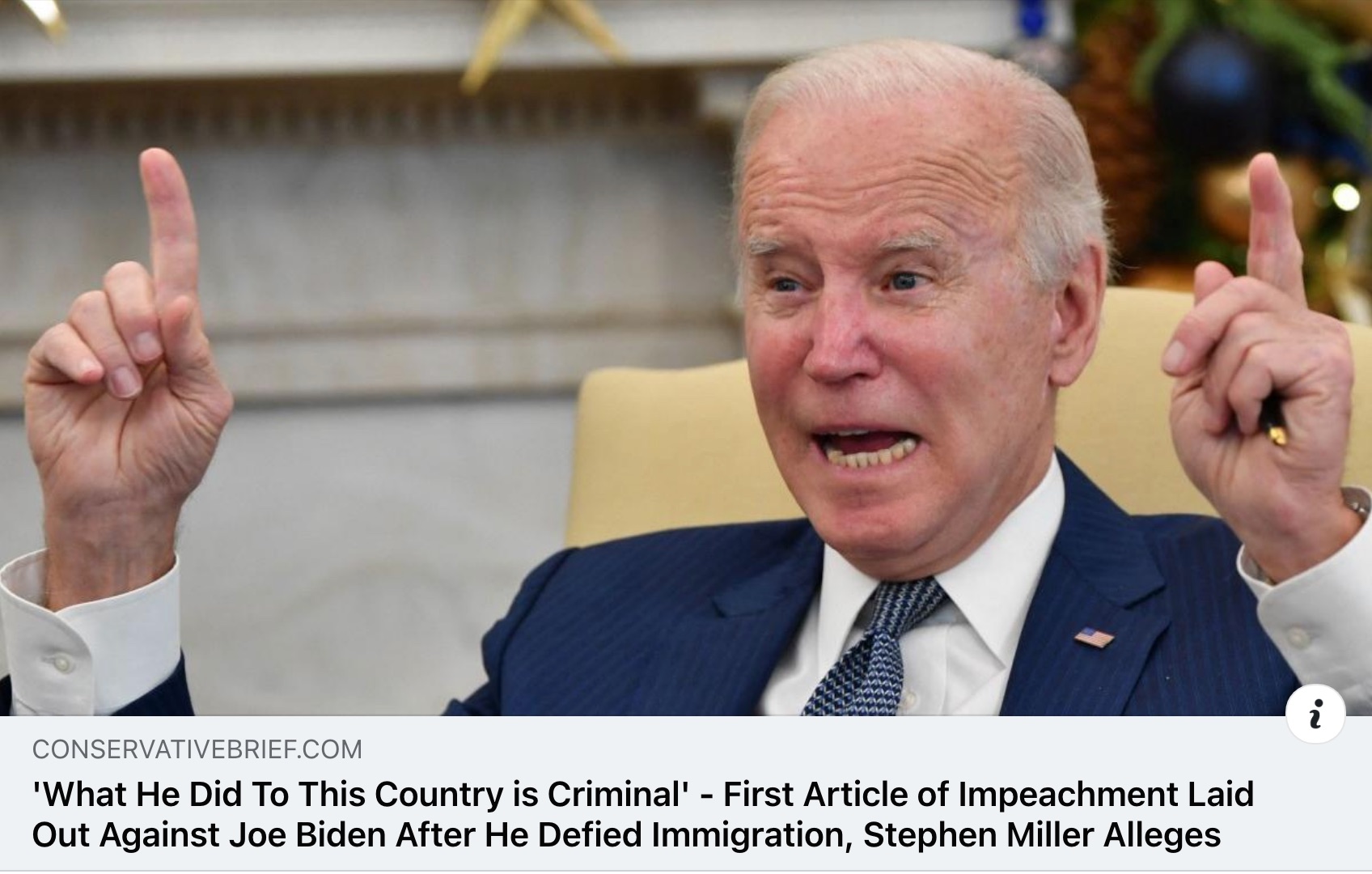 For reference, an “article of impeachment” was defined by Cornell’s Legal Information Institute as:

Articles of Impeachment are the documented written statement of charges relied upon as the basis for removing an individual from office.

The allegations listed in the Articles of Impeachment can be quite general but do contain enough certainty so as to enable the accused to bring themselves the proper defense, or in the case of an acquittal, to allow the accused to either avail themselves of it. Additional articles of impeachment may be presented at any stage of the ongoing impeachment.

The accused party usually responds to the answer to articles of impeachment through arguments and facts it is expected to answer each article of the accusation.

It was far from the first time one of many nearly identical hyperpartisan blogs pushed a nearly identical narrative, implying that Biden was at risk for or actively being impeached and relying on heavy-sounding but ultimately specious language like “serious charges” or “article of impeachment.” In September 2021, we addressed a very similar post in circulation at the time:

At that time, we described the sites’ deceptive practices in generating clicks through willfully misleading headlines:

As presented in share format, Facebook users were exposed only to the claims in the headline, which suggested that United States President Joe Biden and U.S. Vice-President Kamala Harris were “served” with an “impeachment charge,” language clearly used to imply that Biden and Harris were formally or criminally “charged.”

We clicked through social media shares of the “first article of impeachment laid out against Biden” post, which unsurprisingly led to content with an entirely different headline. Published on February 9 2022, the headline and ensuing content read:

Stephen Miller Says Biden Should Be Impeached Over Immigration Failures

Former Trump White House advisor Stephen Miller is arguing that Joe Biden should be impeached for his immigration failures.

During an interview on Fox News, Miller argued that the first articles of impeachment against Biden should be over his administration’s refusal to honor a court order about the Remain in Mexico policy, which was created by President Donald Trump that allowed the government to send illegal aliens back to Mexico before their trial date.

In other words, an aide to a former president went on television and said something, then someone wrote about it.

Words such as “impeach,” “impeached,” or “impeachment” only appeared in the excerpted content above, and the date of the purported Fox News interview was not mentioned. The real headline (“Stephen Miller Says Biden Should Be Impeached Over Immigration Failures”) premised the content on purported remarks by Stephen Miller, excerpted in the post.

Miller’s quote also did not include any words related to impeachment. It read in part:

“Let’s be very clear about what we’re looking at. This is an inside attack on our democracy. It’s something that our Founders never anticipated could happen, something no one ever dreamed would happen, which is that the President of the United States, the person sitting in the Oval Office, is working systematically, or his deputies are in this case, to allow people to invade into our country against our laws, to consume public benefits, to take American jobs, and to threaten public safety, all aided, abetted, facilitated, planned by our own government [inaudible],” Miller began.

Stephen Miller explains what Biden’s done to violate his oath of office, and how Republicans should deal with him. Impeachment as soon as they regain the majority, and that’s not all …

On February 9 2022, a ConservativeBrief.com article published on that date was virally popular due to its bait-and-switch headline. Shares of the post suggested the headline included the phrase, “First Article of Impeachment Laid Out Against Joe Biden,” but the actual headline on the page read “Stephen Miller Says Biden Should Be Impeached Over Immigration Failures.” Moreover, the material referenced was from December 2021 or earlier, and was unrelated to any events in February 2022. Clearly the site swapped in a false claim to generate shares and clicks, and most readers were exposed only to the misleading version of the headline. Nothing in the headline or its source material reflected real-world events in February 2022 or earlier.