On February 7 2022, popular posts on Imgur and Reddit’s r/worldnews reported that a judge in Ottawa had temporarily “banned” honking in the province: 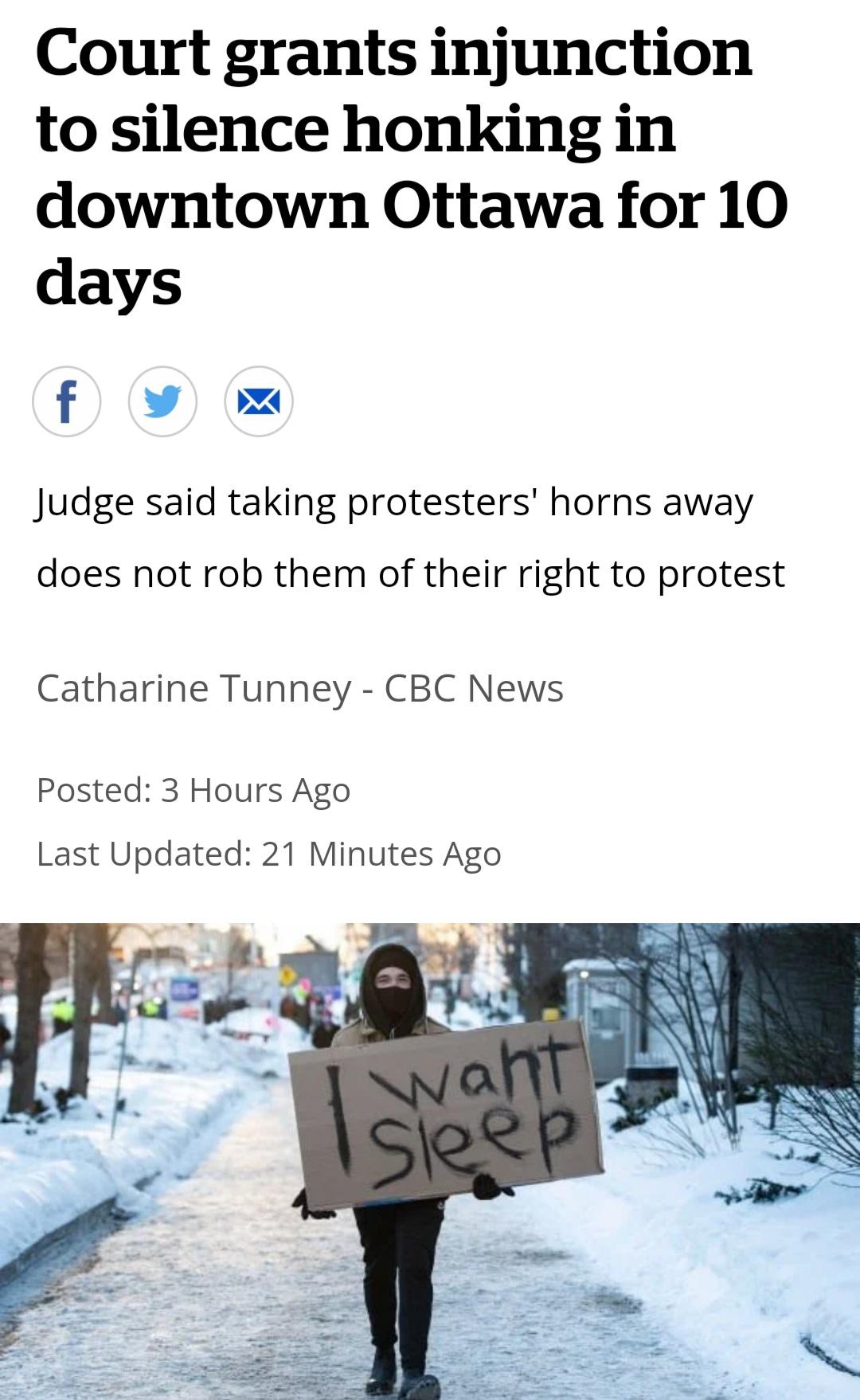 On Imgur, a headline read: “Court grants injunction to silence honking in downtown Ottawa for 10 days.” Under the title, a photograph of a woman holding a sign reading “I want sleep” appeared.

Both posts referenced a February 7 2022 CBC article with the same headline; one of our recent fact checks examined falsely labeled images purporting to depict protests in Ottawa in February 2022:

On February 8 2022, a Wikipedia entry titled “Freedom Convoy 2022” (tagged as a “current event”) provided a summary of the broader events related to the Ottawa honking ban:

Freedom Convoy (French: Convoi de la Liberté) is an ongoing protest in Canada against COVID-19 vaccine requirements for truckers to re-enter the country by land introduced by the Government of Canada on January 15, 2022. Originally composed of several routes traversing all of the Canadian provinces, the truck convoys converged on Ottawa on January 29, 2022, with a rally at Parliament Hill. The trucking convoys were then joined by pedestrian protesters. The protest continued into February [2022.] Protesters have stated that they will not leave until all COVID-19 restrictions and mandates have been repealed, and some have called for the federal government to be overthrown.[20]

The convoy has been condemned by trucking industry groups, and the Canadian Trucking Alliance reported that a large number of protesters had no connection to trucking. On January 27 [2022], Prime Minister Trudeau said that almost 90% of Canadians were vaccinated, as were many truckers in Canada, and that a “small fringe minority of people” in the convoy do not “represent the views of Canadians.” A January 29 [2022] CTA statement cautioned the public that a “great number of protestors” with no connection to the trucking industry “have a separate agenda beyond a disagreement over cross border vaccine requirements.”

Ottawa Police’s response to the protests and later encampments of lingering protesters drew criticism from local residents. Complaints focused around lack of enforcement on noise due to constant horn-honking, disruption of livelihoods and continued gridlock. Police later addressed some concerns by issuing 30 tickets on February 3 [2022].

On February 4, 2022, Ottawa human rights lawyer Paul Champ filed a $9.8 million class action lawsuit against the organizers of the Freedom Convoy on behalf of downtown Ottawa residents over continuous air horn and train horn noise. The lawsuit is seeking $4.8 million for “private nuisance” and $5 million in punitive damages. In response to the suit, convoy organizers agreed to cease horn noise until 1:00PM on Sunday, February 6 [2022]; however, many protesters ignored the agreement.

The lawsuit went to court on the afternoon of February 5 and a hearing was adjourned to February 7 [2022]. On February 6 [2022], Champ posted an ultimatum to protesters in Ottawa that they would be released from the lawsuit if they left Ottawa by 10:00AM EST on Monday, February 7 [2022].

On February 7 2022, BBC covered the story of the chaotic demonstration, quoting Ottawa mayor Jim Watson as saying the city was “losing this battle,” describing it as “completely out of control,” and adding there had been several reports of racist incidents. Watson declared a state of emergency due to the chaotic events:

He added the protests posed a threat to residents’ safety. There have also been reports of racial attacks … Speaking to Canadian radio station CFRA, Mr Watson said the protesters were behaving increasingly “insensitively” by continuously “blaring horns and sirens, [setting off] fireworks and turning it into a party.”

A February 3 2022 editorial in Canada’s Globe and Mail, “What’s happening in Ottawa is an assault on democracy,” began:

They came in droves from all over the country, packed into cars and pickup trucks, cheered on by supporters along the way. They saw their freedoms under attack and converged on the nation’s capital in an attempt to force the resignation of a democratically elected government, using intimidation and threats to showcase their power. Desiring greater liberty, some displayed Confederate flags and Nazi swastikas, defiled national monuments, desecrated the memory of war heroes, and demanded that federal leaders be overthrown.

What I am describing happened in the United States on Jan. 6, 2021, and is still going on in Canada. The truckers’ movement is no longer a demonstration for freedom or vaccine mandates, but a well-funded assault on democracy. As one organizer put it, their mission was to “compel the government to dissolve government.” We must be clear about what took place in Canada last weekend: an attempt to alter government policy by force – while masquerading as a rally for freedom. More dangerously, it was a movement insidiously co-opted by white nationalists and their far-right allies.

The Dual Meaning of ‘Honk Honk’

On Twitter, one of the most popular tweets under the #HonkHonk hashtag (from February 5 2022) demonstrated how much of a nuisance those horns had become:

Another user tweeted “honk the good honk” in praise of the protests:

Day 10 of the Canadian/US blockade at Coutts border, thousands of truckers, farmers and cowboys 🙏🏻 Honk the good honk🥳 pic.twitter.com/knR7CASr8U

Tweets in favor of the convoy’s actions often used the phrasing:

Friend who lost her job for not being vaccinated — who was told she wouldn’t get severance or EI — hired a lawyer and is now getting both. 😏 ✌🏼

However, researchers of the far right referenced “honk honk” as it related to the convoy in different terms, namely as an antisemitic dog whistle comparable to using the number “88”  for “HH”:

For folks not in the know:

"Honk honk" is the catchphrase of the Honkler, a rainbow-wigged Nazi meme that originated on 4chan as part of an attempted op to appropriate the rainbow from gay culture.

A November 2020 Urban Dictionary entry for “Honk Honk” echoed that claim, as did entries from August and May 2019:

[1] Honk Honk
A dog whistle usually used on 4chan by Nazis, fascists, white nationalists, ect. to hint at the [apparent] “clown world” or degrading society we live in.

“Kids these days can be what ever gender they want, what’s next? Honk honk!”

[2] honk honk
A dog whistle commonly used by neo-nazis. [Essentially] a code for “Heil Hitler”, originating from the right wing side of the clown world movement, “honk honk” being the sound of a clown’s nose … “Honk honk, my friend. Honk honk.”

On February 7 2022, a Newsweek.com item addressed a viral tweet about the “honking” situation in Ottawa in early February 2022, with video demonstrating the unsettling, dissonant sound of numerous horns sounding:

Is this a peaceful protest? What if you lived here, and this was going on from early in the morning until late at night, how would you feel? #Ottawa pic.twitter.com/oIhVKCYjur

Newsweek.com quoted Ottawa’s mayor on February 6 2022, describing a chaotic atmosphere in the city. The article appeared to have been published prior to the injunction:

The mayor continued: “Someone is going to get killed or seriously injured because of the irresponsible behavior of some of these people who are honking their horns and destroying the fabric of neighborhood. Imagine living through that hell, time and time again, for 10 days.”

Later on February 7 2022, TheWeek.com reported on the judge’s honking injunction:

“Tooting a horn is not an expression of any great thought I’m aware of,” Justice Hugh McLean of the Ottawa Superior Court said. He also said the ban on honking would not rob demonstrators of their right to protest.

It referenced the same CBC piece seen on Reddit and Imgur:

An Ottawa judge has granted an interim injunction seeking to silence the honking horns that have plagued residents of downtown Ottawa for the past 11 days [as of February 7 2022] … The temporary injunction order is effective immediately and is meant to silence the horns at all hours for the next 10 days. It covers the zone north of the Queensway, the city’s main east-west artery.

Lawyer Paul Champ said air horns and train horns are blasted at sound levels of 105 to 120 decibels for prolonged periods and can cause permanent hearing damage.

According to the order, police are now authorized to arrest and remove anyone they believe is aware of the order and is contravening it. They also have the discretion to release anyone from arrest if that person agrees in writing to obey the order.

The defendants are also ordered to publicize the injunction on social media.

A February 8 2022 Insider.com report provided a little more context about the hearing:

Li claims the noisy protests have caused her emotional distress, sleeping difficulties, and disrupted the peace of her home, among other things, and is seeking damages, The Star reported.

In her complaint, she said all members of the suit were “living in daily torment” due to the truck drivers’ actions.

On February 7 2022, popular posts on Reddit and Imgur referenced news that a judge in Ottawa banned honking for ten days. That claim was accurate, but there was some additional context. Videos of non-stop horn honking in Ottawa spread on social media, and Ottawa Major Jim Watson declared a state of emergency ahead of the judge’s injunction. Social media posts supporting the convoy often included “honk honk” or the hashtag #honkhonk; as users pointed out, “honk honk” had long been part of a neo-Nazi meme on sites like 4chan as a thinly veiled stand-in for “Heil Hitler.”