The journey of a rare type of meteorite to Earth has continued online, albeit with the details fudged over time.

In this case, the Fukang Meteorite (named after the Chinese town where it was discovered) has become a recurring meme online. In many iterations, the text accompanying photos of a fragment of the meteorite reads:

This Fukang meteorite is 4.5 billion years old and weighs over 2,000 pounds. 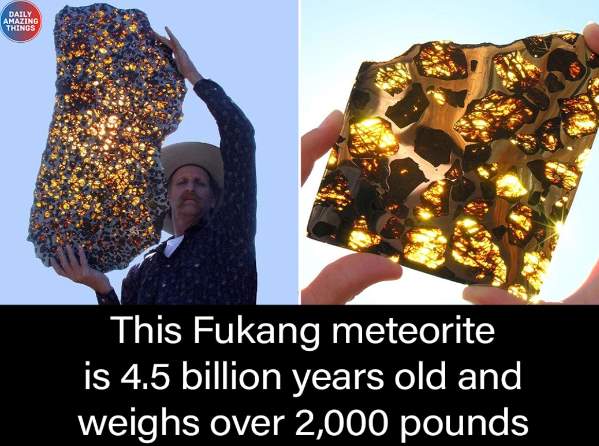 Some iterations of the meme mistakenly say that it was discovered in 2008, but otherwise its existence is legitimate. Beyond its popularity online, the rare pallasite meteorite (meaning that its core is composed of iron and a silicate known as olivine) has attracted interest from collectors since its discovery.

A listing for Sotheby’s Auction House recapped part of its history on Earth:

Pallasites are the rarest of all meteorites, and the Fukang pallasite meteorite is known for being the most beautiful of all, full of large translucent gemstone crystals embedded in an iron-nickel matrix.

Discovered in the Gobi Desert of China in 2000, the Fukang meteorite weighed more than 2200 lbs. It was split into 5 sections, with one now residing at the University of Arizona. The present slice, resembling a silvery sky full of green stars, is one of the finest and most elegant of all samples of Fukang, being cut from the most beautiful, olivine-rich section at the heart of the mass.

A photograph of a man holding one of the fragments is also legitimate; it belongs to “plumber-turned-meteorite hunter” Marvin Killgore. According to NPR, Killgore saw his Fukang piece sell at auction for almost $3 million in 2008.

Years later, a legal battle ensued over another piece of the meteorite between a California man, Stephan Settgast, and a Massachusetts couple, Lawrence Stifler and Mary McFadden in 2014. Settgast had sold his fragment to McFadden and Stifler for $425,000. But as the San Francisco Chronicle reported in 2016, the fight began after Settgast had sent the fragment to a second couple to be polished. According to the newspaper:

After the rock polishers, Keith and Dana Jenkerson of Osawatomie, Kan., who had been hired to spiff up the meteorite for its new owners, said they thought it was worth perhaps $1 million, Settgast decided he wanted his rock back, the Massachusetts couple say.

Settgast went to the Jenkersons’ studio and, while they were away at a rock show, entered the premises and took back the meteorite. It was a clear case of meteorite-napping, said the spurned buyers.

Settgast maintained he was reclaiming the rock because the couple planned to put it on public display at their under-construction museum in Maine. Settgast said that violated the terms of the sale. Stifler and McFadden said a no-museum promise was never part of the deal. They say Settgast has their rock and their money, too.

The case, Settgast v. Maine Mineral & Gem Museum, was settled that same year. But Paul Doherty — the senior scientist at the time for the Exploratorium museum in San Francisco — said that the furor over Fukang fragments pointed to collectors’ fascination with its aesthetics — not necessarily its scientific value.

“This kind of meteorite has been studied and has little new to tell us,” Doherty told the Chronicle. “It came from the core-mantle boundary of an asteroid. We have studied lots of meteorites of this kind. It doesn’t need to be in a museum. If it was a Martian meteorite, that would be different.”