Summary of eRumor:
The German government has begun confiscating residential homes in Hamburg to house an influx of refugees from Syria and other war-torn countries.
The Truth:
It’s true that the owner of six rental properties that sat unused in Hamburg, Germany, for more than five years will be forced to rent the units and pay for renovations, but multiple reports have mischaracterized the move.
The properties were seized under a law approved in 2013 — well before the refugee crisis — to address the city’s longstanding housing crisis. There was no indication whether the units would be rented to refugees or other tenants in need of housing.
Despite the fact that the government action occurred in February 2017, the Daily Mail and other publications picked up the story as breaking news in May 2017. These reports specifically claimed that the apartments would be forcibly rented to migrant populations there, which isn’t exactly true.
Local newspaper Hamburger Abendblatt reported in February 2017 that under terms of the 2013 law, a trustee would oversee renovations of the six long-term lease apartments. The owner, who will be billed for the renovations, was told that he would then be able to rent the units himself, the paper explains:

Since the Hamburg Housing Protection Act became more stringent in 2013, long-term unused apartments can be refurbished and forcibly rented by the trustee, who is commissioned by the District Office. In a first for the district, Mitte now has taken six out of eight residential units at Ohlendorffstrasse 15 in Hamm. After the threat of expropriation, the owner was promised that he would be allowed to rent his apartments again. However, this remains only a verbal promise.

The apartments in Hamm have been empty since 2012. Despite previous foreclosures of 18,000 euros, the landlord had refused to bring the apartments back to the market. Therefore the key power over the residential units was handed over to a trustee on 1 March.
The Daily Mail  publications have reported that government’s forced renting of the living space is related to the influx of refugees to Germany. Local reporting doesn’t support those claims. It appears the owner can rent the units to whomever he deems fit after renovations are complete — but there’s no way to definitively say that no refugees will live there, or that the influx of refugees did not contribute to the city’s housing shortage.
We can say, however, that Hamburg has been in the midst of a housing crisis going as far back as 2009. Like many other cities around the world (and in the Untied States), Hamburg has faced a housing shortage that has priced many of its residents out of the market. Deutsch Bank summed up the issue in a 2017 report on the German housing market:

In Hamburg, prices for existing housing stock have gone up by around 70% since 2009. Price momentum in the city’s rental market is sluggish, however. From 2012 to 2016, rent growth did not even reach half the level of the other major cities. The relatively high level of construction activity is probably a key factor in this and means the gap between supply and demand is likely to be narrower than in Berlin and Munich. All this suggests that low interest rates are the main reason why property prices are increasing in Hamburg. Consequently, Hamburg may have a relatively high sensitivity to any future normalisation of interest rates. Any normalisation of interest rates is probably still several years away, however, which leads us to expect further price increases in the interim.
And it should be noted that Hamburg is one of the regions of Germany that has taken in the lowest number of refugees since the crisis began. As the BBC reports, about 2.5 percent of the country’s refugee population has been resettled in Hamburg. Other areas have resettled far more refugees: 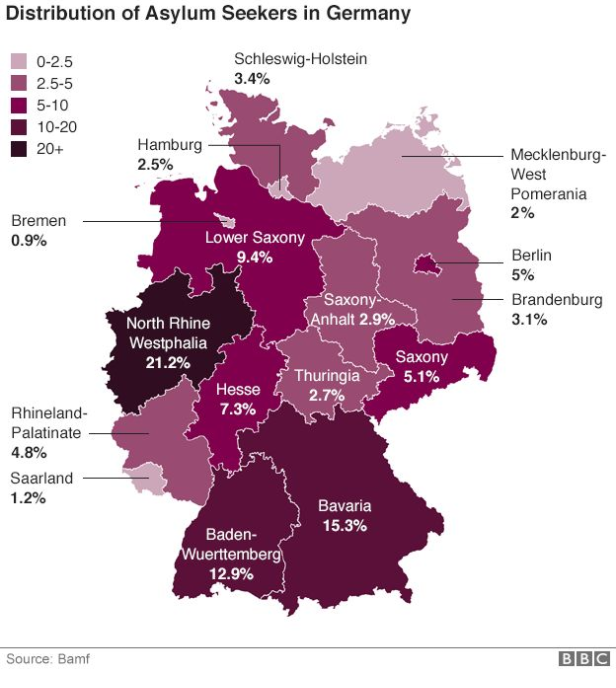 That’s not to say, however, that the refugees that have been settled in Hamburg haven’t affected the region’s already dire housing shortage. Refugees were being housed in converted shipping containers there, and unused commercial space in the city was seized or voluntarily rented from its owners to house migrants back in 2015 at the height of the refugee crisis.
In the end, it’s true that the government forced a property owner to rent units that have sat unused since 2012. A trustee will make renovations and turn the properties back over to the original owner to rent. However, claims that the government specifically forced the owner to rent the units to refugees are false. That’s why we’re calling this report “truth” and “fiction.”