Murphy’s Law contended our plan, and unwillingly baffled our strategy! Where we stood not seconds earlier, the brush began to part. Ted and I found ourselves going “Mano a Mano” with a bear of a lifetime. The sound of Ted’s heavy breathing was the only thing fading out the dull drum of my now sunken heart. I ran through my mental checklist, “Safety off, round chambered, finger on the trigger and relax.” Now was not the time to make errors. I looked over at Ted who stood between the tree and I. “Are you ready,” I asked. He nodded. My attention focused back on the crosshairs of my riflescope. The gargantuan paw appeared first through the tall shoots, followed by the massive, robust cranium. The boar stepped closer. His head was lobbed low; his rusted muzzle leaked clouds of nasal vapor through quarter size nostrils; and those beady, bloodshot eyes stared through my partner and I. The solemn look alone was enough to make one feel threatened, but oddly the bear showed no sign of aggression. Each step closer the bear inched, I felt more compelled to renege on my agreement with Ted, and kill the bear myself. “Pull the trigger!” I demanded Ted, “Pull the trigger!” The blast of Ted’s .338 Win-Mag rang out and sent a direct hit to the bear’s nerve center bringing him to his hindquarters. Two shots to the vitals followed, completely dropping the bear, while a series of three additional rounds provided enough insurance to tame our own racing anxieties. The boar dropped in his tracks. What played through my head in slow motion seemed endless, but in reality was over in a fraction of seconds.

So, photos of the giant grizzly bear that was killed in a Alaska that have been circulating for more than a decade are real, but stories surrounding them are false.
In case your wondering, a hunter in Alaska shot the second biggest grizzly bear ever recorded in 2014. It measured nine feet tall, and its skull measured nearly 28 inches. There was no word on how much he weighed, according to Fox News.
A previous version of the story published by TruthorFiction.com:

Pictures of a Hunter and a Giant 1,600 lb Bear in Alaska–Truth! & Fiction!

There are two pictures of a hunter and a huge bear.  The eRumor says the bear was killed on Hitchenbrook Island by an airman stationed at Elmendorf.  It says the bear was 12 1/2 feet long and weighed an estimated 1600 pounds.
A later version says the photo is of a forest service worker and also includes a picture of an alleged bear attack victim and says the bear had been responsible for several human deaths in Alaska and was the largest bear ever recorded.  Some of the eRumors include pictures of mangled human remains alleged to have been one of the bear’s victims. 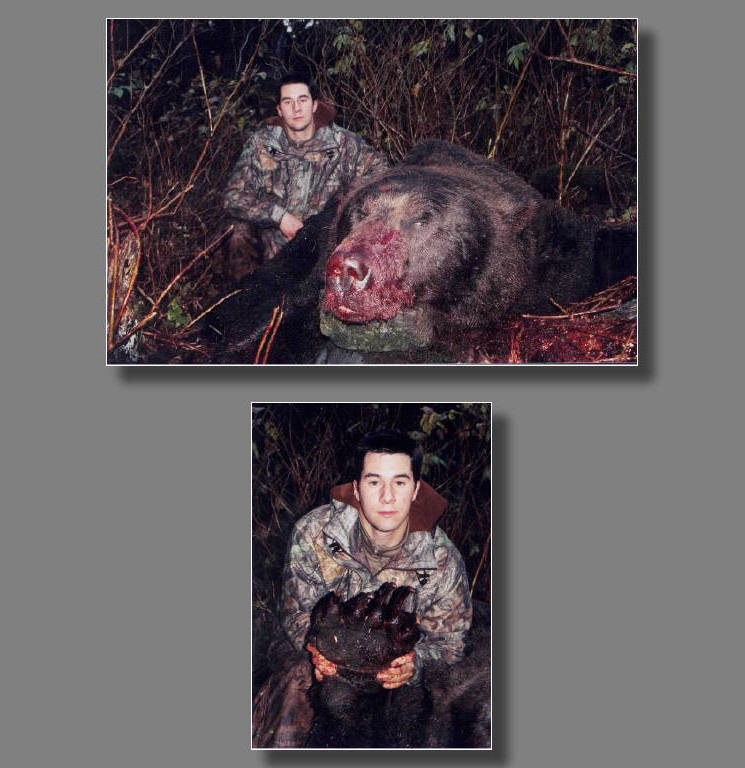 Thanks to our readers, the truth about these pictures has been found. The facts are a little different from the original eRumor, but the pictures do record the results of a true hunt and are real.
The original pictures lacked the label linking them with hunting-pictures.com, but that is where the pictures reside.  They were posted by a hunter who used the nickname  Dalliwacker, on www.assaultweb.net, but who is, according to published articles, Jim Urban.  He says that the bear was actually ten feet high and weighed between 1,000 and 1,200 pounds.  He says the bear did not stand up then drop down and charge.  It showed no aggression at all.  He also says the bear was not shot on Hitchenbrook Island but, like all good hunters, he won’t be specific about where he got it <smile>.
The versions of the eRumor that claims the bear was a killer and was shot by a forest service employee or was a killer and human remains were found in his stomach, are false.