Seven women died despite being treated at Glen Eagles (or Gleneagles) Hospital after inhaling perfume samples they received in the mail.

A hoary old online hoax gained new visibility by invoking an actual agency and a medical facility to continue spreading its falsehoods.

Circulating either as a graphic or as copypasta, the message presented itself as a warning about a threat by mail:

Seven women have died after inhaling a free perfume sample that was mailed to them. The product was poisonous. If you receive free samples in the mail such as lotions, perfumes, diapers etc. throw them away.

Some iterations of the message add, ““The government is afraid that this might be a terrorist act. They will not announce it in the news because they do not want to create panic or give the terrorists new ideas. Send this Fwd: to all your friends and family members.”

And at least one version, which we spotted online as recently as August 2020, was “signed” by Diane J. Ford, who is listed as being from both the “Office of the Chief of Police” and the Office of Risk Management. 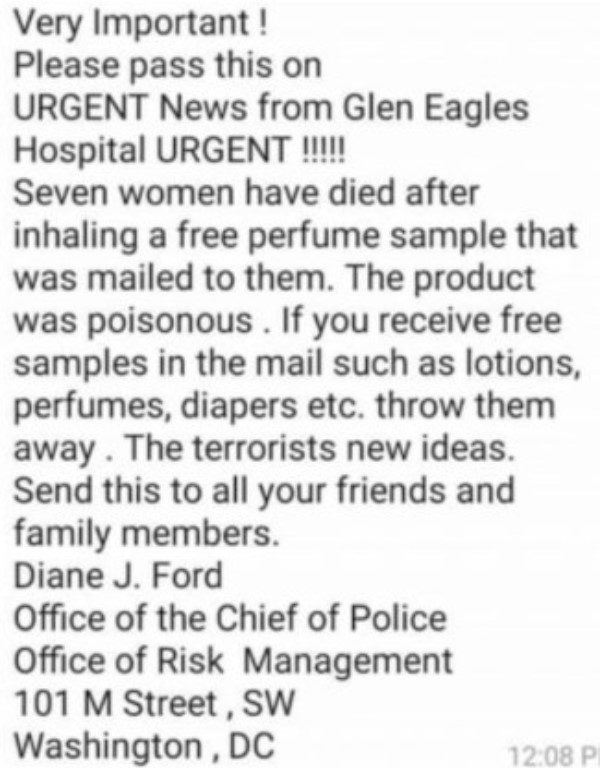 The meme is false for several reasons. While there is an actual Gleneagles Hospital in Kuala Lumpur, the capital of Malaysia, officials there refuted the claim that it had taken on such an outbreak. According to a statement:

We understand the panic and mystification that this email has caused and the public’s need to seek verification and consolation from a reliable medical institution such as ours.

Thus, we would like to highlight that we have never admitted or treated such patients and have never been aware of such incidences. We would also like to categorically state in addition, we declare that no one was ever at any time commissioned or authorised by the Hospital to deliver and circulate such warnings.

The hospital put out a separate statement via Facebook in 2016, when the claim began circulating again on a separate platform, WhatsApp.

“We would really appreciate it if you could also inform anyone whom you know to have received or been affected by this false news, that it is a hoax after all,” the statement read.

There is a municipal Office of Risk Management in Washington D.C., but it deals with workplace safety issues and not mysterious perfume shipments. A person identified in connection with the claim told TruthOrFiction in 2013 that they did not generate the false message.

The hoax has been traced to around 2001, when it originated as the story of a woman who was poisoned after inhaling a perfume sample shortly after the attacks on the U.S. on September 11th of that year, and it has been regurgitated in various iterations since.