Pilot Was Ready to Take Down Flight 93 on September 11, 2001 By Ramming The Hijacked Airliner With Her F-16 Jet Fighter-Truth!

Ten years after the September 11, 2001 Attack on America an amazing story began circulating on the Internet about a female airborne first responder.   The email is about an Air National Guard pilot, Lt. Heather Penney, who was ready to take down the hijacked United Airlines Flight 93 with her unarmed F-16.  She and another pilot had planned to intercept and ram Flight 93 to stop the the terrorists from reaching their target. 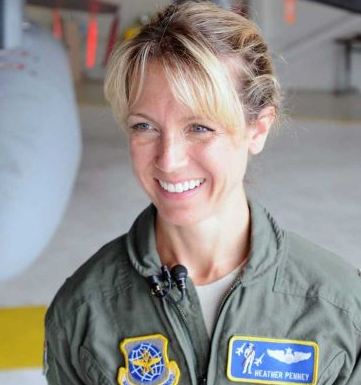 There was also an August 8, 2011 CSPAN interview with Heather Penney, who said she was a brand new First Lieutenant in the Air National Guard and a fighter pilot wingman on the morning of September 11, 2001.  For years Penney had declined to be interviewed about the events of that day.
Penney said she had been stationed for only a short time as a training officer at Andrews Air Force Base when she and her fellow pilots got the word that terrorists had commandeered commercial aircraft in a planned attack that targeted the Pentagon, a second undetermined site in Washington D.C. and the World Trade Center in New York City.
When it was discovered that United Airlines Flight 93 was on a course toward Washington D.C. she said that she and another pilot, Col. Marc Sasseville, rushed into their flight gear and prepared their F-16’s for immediate take off.

No weapons had been loaded on the F-16’s that Penney and Sasseville  were piloting other than some rounds of blanks for training on the plane’s guns.  She and Sasseville realized that time was of the essence and began to taxi to the runway as ground crew pulled the safety pins from the landing gears and removed the tire chocks that prevented their jets from rolling on the tarmac.    The two pilots also bypassed a safety check list that would have eaten up 30 minutes so they could be in the air in a matter of minutes to make visual contact and intercept the hijacked passenger jet.  In case they had to, Penney and Sasseville were prepared to ram Flight 93 with their own fighters.  The two pilots had discussed this plan with each other as they were getting into their flight gear.  Penney had planned to take out the tail section of the airliner to minimize collateral damage on the ground while Sasseville rammed the cockpit` with his fighter jet.
While on their mission to sanitize the airspace from threats the two fighter pilots were sweeping the area looking for Flight 93 when they heard that it had crashed into a field in Stonycreek Township, not far from Shanksville, Pennsylvania.   By this time, U.S. Airspace was declared a no fly zone and all non military planes were grounded. The Air National Guard pilots began a new task of escorting planes in the air back to airfields.  Later that day, Lt. Penney escorted Air Force One with President George W. Bush inside back to Andrews Air Force Base.
Heather Penney is now a Major in the Air National Guard and she was recently interviewed about the drama in the skies after she and other fighter pilots scrambled to respond to the attack on America.  Clickhere to see a CSPAN video.   >
Updated 10/13/111