Green Moon Will Be Seen in May 2016-Fiction!

Summary of eRumor:
A viral Facebook post claims that an extremely rare astronomical event called a “green moon” will make the moon appear green for the first time since the 1800s.
The Truth:
There’s no truth to reports that a “green moon” astronomical event will happen for the first time since 1847 in May 2016.
The rumor started with a meme on Facebook that showed an image of a green moon and text that read, “Save the Date – May 29th, 1016. Green Moon Visible for First Time Since 1847”: 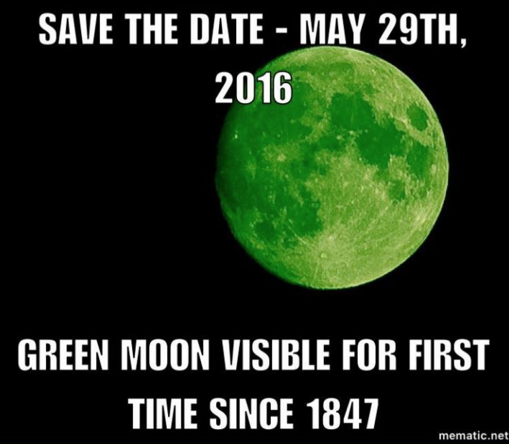 There are three main reasons we’re calling the green moon claim “fiction.”
First, there are plenty of credible websites that list astronomical events for 2016, and a green moon doesn’t appear on any of them. Space.com, Sea and Sky and Universe Today have comprehensive lists, including “The Top 101 Astronomical Events for 2016,” and the so-called green moon is nowhere to be found.
Second, the photo of the green moon used in the meme appears to have been lifted from a flickr account. The user had photoshopped a photo of the moon taken on August 3, 2009, and posted a joking comment, “Who said the moon isn’t made of green cheese.”
Third, there were some cool astronomical events in 1847 —including a solar eclipse — but there’s no record of a green moon occurring that year. And, considering that Neptune had just been discovered the year before, there was plenty of interest in astronomy back then, so it wouldn’t have gone unnoticed.
Finally, there was an actual astronomical event that may have inspired the green moon in May claim that apparently started as that joke and snowballed into a hoax. In March 2016, at the same time that the green moon rumor went viral, astronomers and stargazers were on the lookout for a green comet, LINEAR, Tech Times reports:

Kelly Beatty, senior editor of the space magazine Sky & Telescope,explained that Comet LINEAR may not appear quite as obvious as typical depictions of comets that have long tails.

She said that the light of this particular comet is not concentrated in one point, but rather it is spread out. This gives it a soft, round glow that is larger than that of the Moon though several times dimmer.

The green haze typically seen surrounding LINEAR is believed to be produced when light from the sun comes into contact with the comet’s diatomic carbon atoms.

So, although we can’t confirm this, it seems probable that the green LINEAR comet expected in late March 2016 may have inspired claims about a green moon appearing in May 2016.
For all these reasons, we’re calling this one fiction.