An archival image from the late 19th century shows a girl with a striking resemblance to Greta Thunberg.

Around November 18 2019, several tweets compared photographs of Greta Thunberg side by side with a generations-old image of a girl with a strong resemblance to the young modern-day activist, suggesting that she is a “time traveler“:

So, ‘Greta Thunberg’ is in a photo from 120 years ago, and it’s my new favourite conspiracy. Greta’s a time traveller, from the future, and she’s here to save us. pic.twitter.com/5ObTjPFXvk

So that’s why she’s so adamant about climate change awareness. She’s been to the future and knows how f***ed we are.

The historical meme was not the first time people “found” the young activist in years-old material. Thunberg was even the subject of her own “Simpsons predicted it” meme, in which a plotline in the show’s movie purportedly foretold her rise to fame for climate activism.

Typically, sharers commented that Greta Thunberg is a time traveler, and in at least one, a user mused she was “here” in 2019 from “the future to save us.” News outlets were quick to describe the viral photograph as a “conspiracy theory,” but it didn’t seem anyone was genuinely claiming that Thunberg had actually traveled through time in order to avert catastrophes:

The uncanny resemblance has since sparked a Twitter discussion, with many agreeing that the picture shows a Greta lookalike.

One person tweeted: “What it is, right, is that actually she’s a time traveller, and she’s come to warn us about the future. It’s the only explanation.”

Framing the meme as a legitimate “conspiracy theory” seems to be a form of engagement bait and clickbait, riling up commenters to decry anyone taking it seriously — which no one seemed to be doing.

An example of the “conspiracy theory” appeared on one blog:

Greta Thunberg is too good for this world, which is exactly why I’ve dived head first into this conspiracy theory that she is, in fact, a time traveller. Because anyone who is doing good things could not possibly be from this trash-human planet right now, am I right?

Someone, according to 7 News, managed to find this Ye Olde photo from the University of Washington archives, and did a double take because hot damn, how much does the kid on the left look exactly like Greta? Extremely so.

Interestingly, one TinEye search returned a single result from March 2018; Thunberg came to prominence in or around August 2018. However, that image was connected to a defunct link, and we were unable to find a better quality version of it:

The 120-year-old image is authentic and undoctored. It was archived by the University of Washington and dated circa 1898:

In its original, uncropped form, it looked like this: 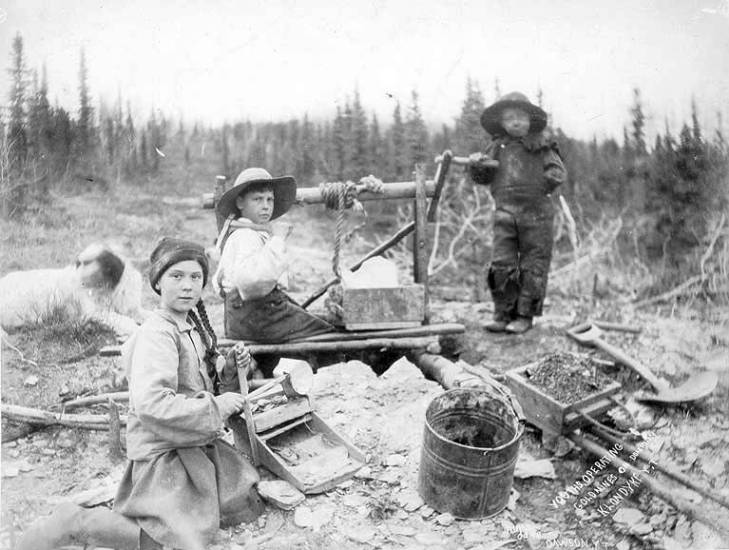 After readers found the image, many joked that young climate activist Greta Thunberg was a time traveler from the future trying to save the world from a changing climate. The photograph was a little more than 120 years old, and shows three children, one of whom bore a strong resemblance to Thunberg. We found no indication that anyone genuinely believes the “conspiracy theory,” simply that people noticed a previously circulating image and thought the resemblance was funny.

For its part, the actual image is real.