Wu-Tang's GZA is a scientist, educated in quantum physics, who has lectured at MIT and Harvard.

In February 2019, a #BlackHistoryMonth post on Facebook asserted that the Wu-Tang Clan’s GZA (also known as The Genius) is a scientist, has lectured at Harvard, and is educated in quantum physics: 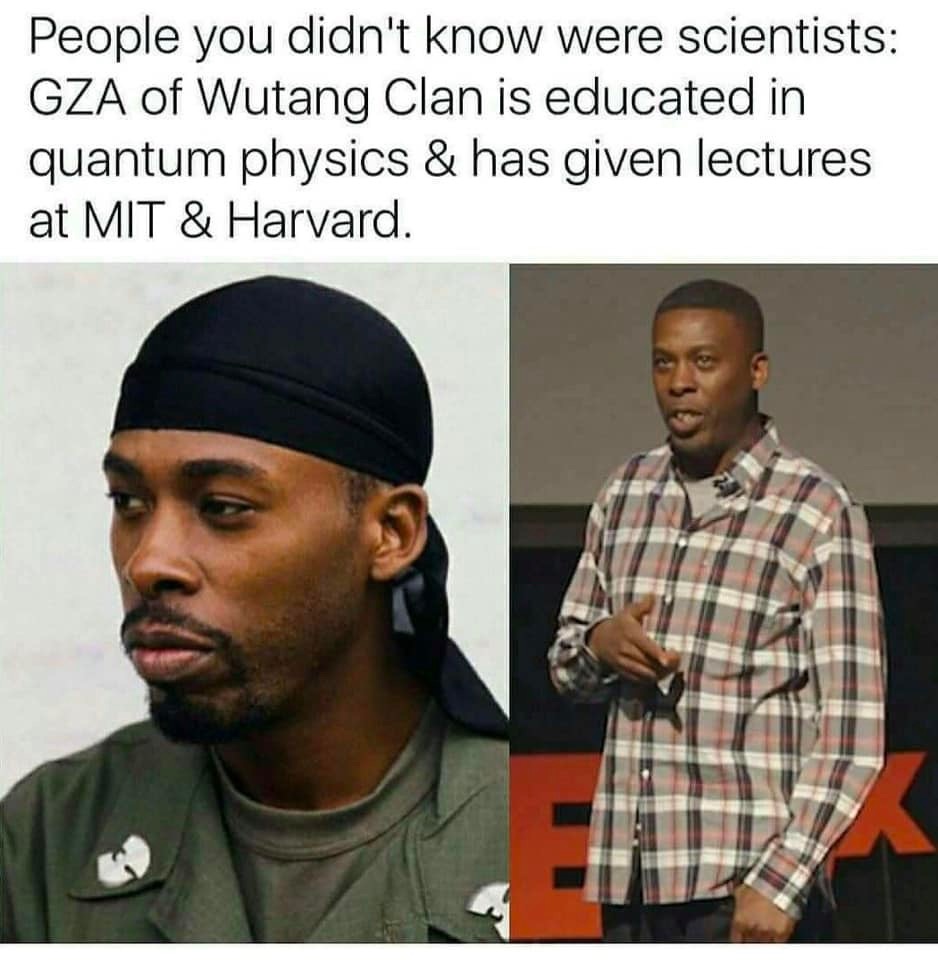 People you didn’t know were scientists:

GZA of Wutang Clan is educated in quantum physics & has given lectures at MIT & Harvard.

The post was tagged “Day #6 #Ihadnoclue #sciencenerd and #blackhistory. No citations were provided about GZA’s science credentials, but the post was shared tens of thousands of times.

Wu-Tang Clan rapper GZA has been known as the Genius since the early days of his career – but in recent months, the name has been particularly apt, as he has spent much of his free time chatting with scientists at the Massachusetts Institute of Technology and giving lectures at Harvard and New York University. The emcee also recently completed work on Dark Matter, a new album inspired in part by his interest in quantum physics, which will hit stores later this year.

In response to a question about GZA’s passion for dark matter, he said:

I’ve been interested in [quantum physics] for years. I mean, if you think about it, if you go back to Legend of the Liquid Sword – I put that out in 2002. I had a song on there, a verse where I say:

Words pulled together, sudden change in the weather

The nature and the scale of events don’t make sense

A story with no warnin’ you’re drawn in, environments

Moving at colossal speeds, they crush an emcee

Since this rap region is heavily packed with stars

Internal mirror in the telescope, noticed the Czar

From far away, they blink as the lightnin’ strolled

However, the interview stopped short of characterizing GZA as a scientist (implying formal education in the sciences) rather than a well-informed physics enthusiast and autodidact.

The meme also suggested that GZA “gave lectures” at Harvard and at the Massachusetts Institute of Technology, implying that the artist taught classes on branches of science like physics. It’s true that GZA appeared at Harvard in November 2011 as a guest lecturer, but the lecture involved was outside classes and open to the public; further, its content was more about GZA’s work and interests (including, but not limited to, physics):

…GZA is planning on hitting up Harvard University as a guest lecturer.

The Genius will speak at a lecture hosted by the Harvard Black Men’s Forum in Science Center D on Thursday, December 1st at 5 p.m. The chat, open to the public, will focus on the Wu-Tang Clan and his creative process, and will be followed by a Q&A session.

Wu-Tang Clan rapper GZA/The Genius is set to give a lecture about his music career and lyrical craft at Harvard’s Black Men’s Forum on December 1st [2011].

The Harvard Crimson covered GZA’s visit in December 2011, reporting that the artist spoke primarily about life and hip hop:

“This is the first time for me. I should be learning from you all,” GZA said. “I’m actually shaking right now, crazy,” he added with a laugh.

As he took the stage, a lecture hall full of fans greeted him with shouts of the trademark Wu-Tang phrase, “Peace.”

GZA closed his lecture with some advice for those that had turned out.

The Boston Globe reports that Gary Grice, who goes by the stage name “GZA,” will speak with students at the Cambridge university about his latest album and how art and outer space collide.

GZA isn’t new to the school’s campus. The original Wu-Tang member last visited MIT in 2012 to talk to students about chess, freestyle rapping and the music that influenced his life.

On an early May afternoon in the offices of Neil deGrasse Tyson, the director of the Hayden Planetarium, a model of Saturn caught the eye of a 45-year-old high-school dropout, and a lyric was born.

“I thought, this is probably the longest spinning record in the world,” said GZA, the hip-hop artist and founding member of the Wu-Tang Clan, referring to the ring system surrounding the planet. About a week later, the words crystallized and he offered them over a vegetarian lunch on the Upper West Side.

“God put the needle on the disc of Saturn / The record he played revealed blueprints and patterns,” he rapped in his signature rhythmic baritone, offering a taste from his forthcoming album, “Dark Matter,” an exploration of the cosmos filtered through the mind of a rapper known among his peers as “the Genius.”

Informed by meetings with top physicists and cosmologists at MIT and Cornell University, “Dark Matter” is intended to be the first in a series of albums that GZA—born Gary Grice in Brooklyn in 1966—will put out in the next few years, several of which are designed to get a wide audience hooked on science.

For GZA, a major challenge is convincing skeptics for whom hip-hop and an academic subject like physics seem incompatible.

“It’s gonna sound so boring to most people,” the rapper said. “There have been times when I’ve been told, ‘Oh, you’re doing an album about physics? I hope it’s not boring.’ They don’t get the idea. Because rappers are so one-dimensional, so narrow-minded, it comes off corny.”

Still, he believes that “Dark Matter” will tap into the innate curiosity of listeners—even those with no outward interest in science.

The article reiterated that GZA’s formal education ended early, but that he worked with scientists to develop an album about physics:

Despite have left school in the 10th grade, GZA nurtured his affection for science as he developed his skills as a lyricist.

“There were certain things that grabbed my interest, such as photosynthesis, such as us living off plants and plants living off us,” he said. “You look at everything in that light—so if I’m looking at ice cubes, I might start thinking about absolute zero, or Fahrenheit and Celsius. There’s so much that can make me think about science.”

They are an unlikely team of educational reformers.

Christopher Emdin is a Columbia University professor who likes to declaim Newton’s laws in rhyme. GZA is a member of the Wu-Tang Clan who left school in 10th grade. When the two men met this summer, at a radio show hosted by Neil deGrasse Tyson, the director of the Hayden Planetarium, they started talking about science and education — particularly, why science classrooms were failing to engage many African-American and Latino students, who together make up 70 percent of New York City’s student body. Only 4 percent of African-American seniors nationally were proficient in sciences, compared with 27 percent of whites, according to the 2009 National Assessment of Educational Progress.

GZA, 46, who was born Gary Grice, had just finished an extraordinary round of meetings with physicists at Harvard and the Massachusetts Institute of Technology, culling ideas for a coming solo album about the cosmos. Dr. Emdin, 34, an assistant professor of science education at Teachers College, was a lifelong hip-hop fan. They discovered a shared interest in merging their two worlds: GZA by bringing science into hip-hop; Dr. Emdin by bringing hip-hop into the science classroom.

Next month, the two men, along with the popular hip-hop lyrics Web site Rap Genius, will announce a pilot project to use hip-hop to teach science in 10 New York City public schools. The pilot is small, but its architects’ goals are not modest. Dr. Emdin, who has written a book called “Urban Science Education for the Hip-Hop Generation,” hopes to change the way city teachers relate to minority students, drawing not just on hip-hop’s rhymes, but also on its social practices and values.

The meme tells a partially accurate story about GZA’s passion for science, but leaves out a stronger underlying truth. The Wu-Tang rapper is indeed passionate about science, and while he hasn’t taught at Harvard or MIT, he did appear at several well-known universities (those among them) to speak about his life and interest in science. During that time, GZA worked with science advocates to develop initiatives drawing young hip-hop fans to promote scientific literacy, and has consistently expressed a deep interest in and love for science education.