The Red Cross is aiding the immigrant caravan traveling through Mexico to the United States.

In October 2018 a Facebook user shared the following status update, alleging that the Red Cross was providing tents and food to a group of people moving through Mexico to the United States to request asylum at its southern border: 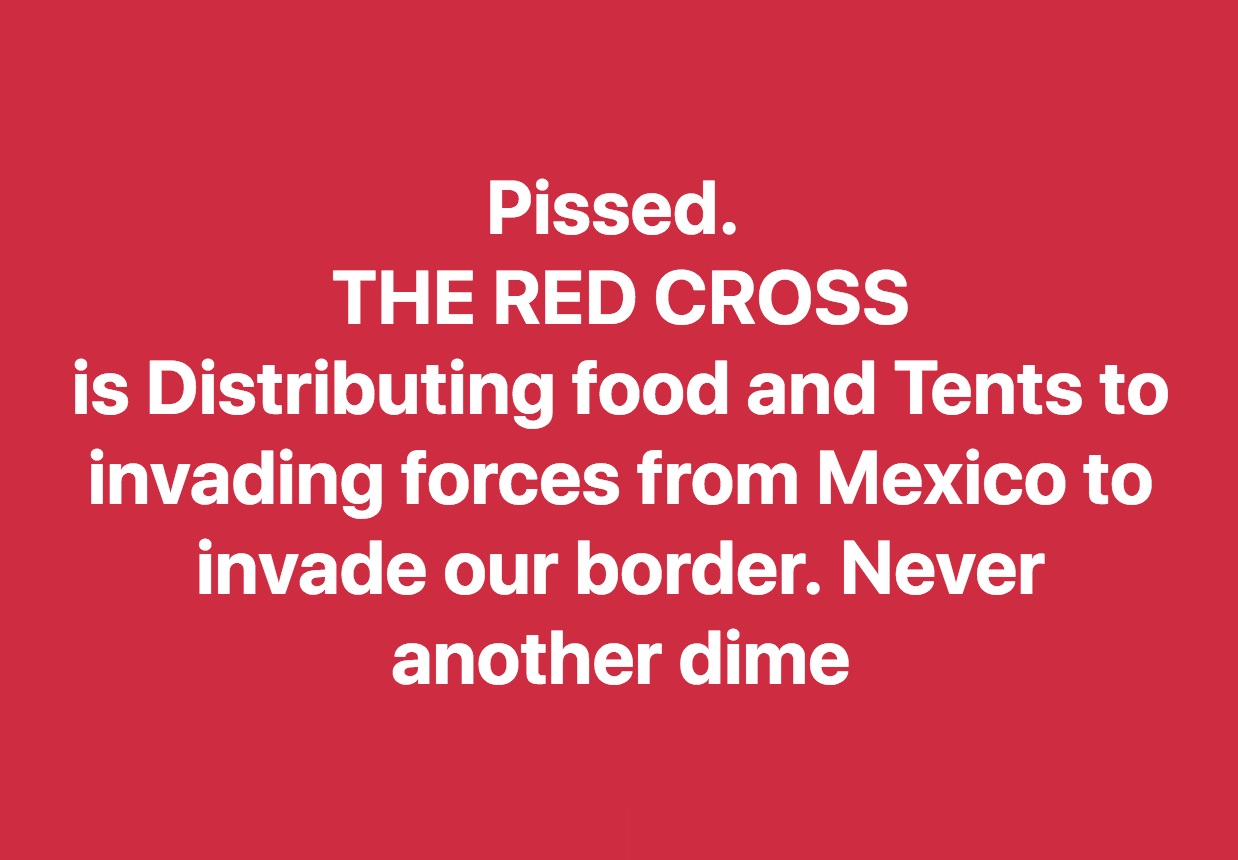 Pissed. THE RED CROSS is Distributing food and Tents to invading forces from Mexico to invade our border. Never another dime

The user referenced controversy about caravans of immigrants fleeing untenable violence and hoping to seek entry to the United States. Primarily, they lambasted the Red Cross, a disaster relief organization engaged in efforts to aid people in need around the world:

We received our first congressional charter in 1900 and to this day we are tasked by the federal government with providing services to members of the American armed forces and their families as well as providing disaster relief in the United States and around the world.

AFP rated the claim false, based on an iteration of this same rumor about the American Red Cross aiding the caravan. The outlet explained:

“Why is American Red Cross providing to Mexico Caravan headed to invade our border with tents,” asks the caption of a meme shared over 12,000 times on Facebook and Twitter in the past week. The picture above the caption shows a family of migrant sitting on the ground in front of a tent stamped with the iconic red cross of the eponymous charity organization.

However, the claim that the American Red Cross is providing support to the Honduran migrants currently travelling through Mexico is false. The tent featured on the photo does bear the logo of the Red Cross, but the words “Cruz Roja Mexicana” attest to the fact that it in fact belongs to the Mexican counterpart of the American Red Cross.

Indeed, certain Red Cross societies are providing support to the migrant caravan, though not that of the US. In a press release, the organization explains that “The Red Cross Societies of Honduras, Guatemala and Mexico have mobilized their volunteers to assist people along their journey.”

AFP linked to an October 20 2018 press release issued by the International Federation of Red Cross and Red Crescent Societies:

Red Cross volunteers report that many of the people they are supporting, a majority of whom are women and children, are suffering from dehydration, stomach infections, and foot injuries as they walk the long journey.

“We are especially concerned about the health and humanitarian needs of this wave of people on the move. Red Cross volunteers across Central America are accompanying them along their journey, providing medical care and reuniting families. It is imperative that the dignity and security of families are safeguarded, and that they are kept together.”