A little-known underground railroad ran south to Mexico when slavery was legal in the United States.

On February 13 2019, a Facebook user shared a screenshot of a tweet, originally tweeted a day earlier by @HISTORY about a purported version of the Underground Railroad running south to Mexico: 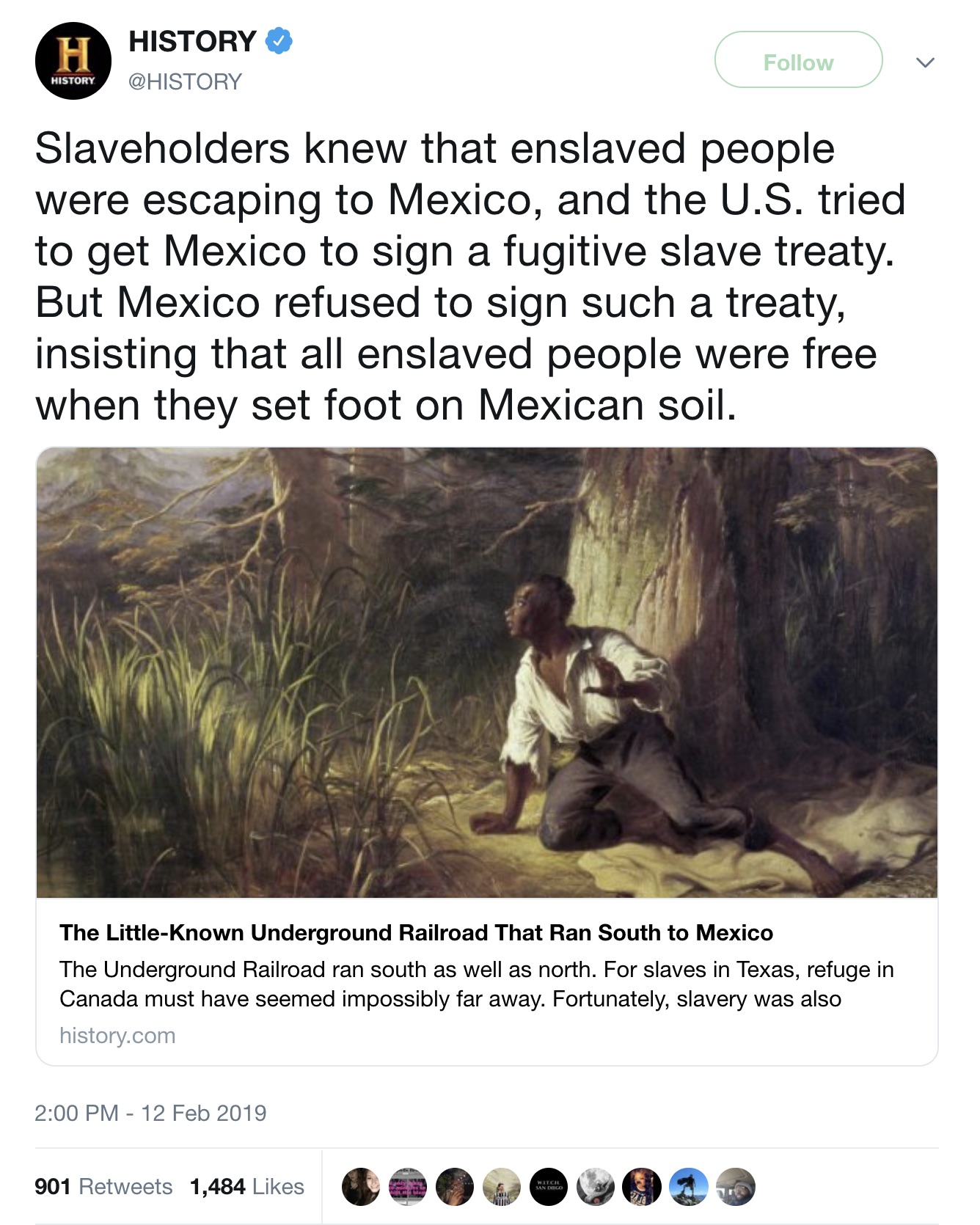 A link to an article led to an October 2018 History.com article:

The Underground Railroad ran south as well as north. For slaves in Texas, refuge in Canada must have seemed impossibly far away. Fortunately, slavery was also illegal in Mexico.

Researchers estimate 5,000 to 10,000 people escaped from bondage into Mexico, says Maria Hammack, who is writing her dissertation about this topic at the University of Texas at Austin. But she thinks the actual number could be even higher.

“These were clandestine routes and if you got caught you would be killed and lynched, so most people didn’t leave a lot of records,” says Hammack.

There’s some evidence that tejanos, or Mexicans in Texas, acted as “conductors” on the southern route by helping people get to Mexico. In addition, Hammack has also identified a black woman and two white men who helped enslaved workers escape and tried to find a home for them in Mexico.

As the title suggested, information about Mexico’s position regarding fugitive slaves was not widely reported on historical sites. One result was a New York Times article published on June 29 1862, reporting that a treaty had been signed agreeing upon conditions for the handling of international fugitives in the two respective countries. Article four of that treaty indeed excluded fugitive slaves from its provisions, due to slavery’s illegality in Mexico at the time:

The provisions of the present treaty shall not be applied in any manner to any crime or offence of a purely political character, nor shall it embrace the return of fugitive slaves, nor the delivery of criminals who, when the offence was committed, shall have been held in the place where the offence was committed in the condition of slaves, the same being expressly forbidden by the Constitution of Mexico; nor shall the provisions of the present treaty be applied in any manner to the crimes enumerated in the third article committed anterior to the date of the exchange of the ratifications hereof.

The National Parks Service’s Underground Railroad series notes that Mexico was among favored destinations after the Fugitive Slave Act of 1850 was passed:

The decision to assist a freedom seeker may have been spontaneous. However, in some places, especially after the Fugitive Slave Act of 1850, the Underground Railroad was deliberate and organized. Despite the illegality of their actions, people of all races, class and genders participated in this widespread form of civil disobedience. Freedom seekers went in many directions – Canada, Mexico, Spanish Florida, Indian territory, the West, Caribbean islands and Europe.

The decision to assist a freedom seeker may have been spontaneous. However, in some places, especially after the Fugitive Slave Act of 1850, the Underground Railroad was deliberate and organized. Despite the illegality of their actions, people of all races, class and genders participated in this widespread form of civil disobedience. Freedom seekers went in many directions – Canada, Mexico, Spanish Florida, Indian territory, the West, Caribbean islands and Europe.

Anywhere that freedom seekers could be free. Routes on the Underground Railroad stretched like a spider web up the east coast, the Appalachians, through Ohio, and across Iowa. Before the Fugitive Slave Act of 1850, many freedom seekers settled in northern states where slavery had been outlawed. Following this law, a second migration took place where many fled to Canada, which has outlawed slavery in 1834. Not only did freedom seekers escape to Canada and northern free states, many migrated to Spanish Florida, the Caribbean and Mexico. Some freedom seekers got on whaling vessels and stayed behind in locations such as San Francisco and Hawaii.

References to the Fugitive Slave Act pertained to the second of two, passed in 1850. The latter was controversial in Northern states, but Mexico was free of the larger federal conflict in the United States (which culminated in the Civil War in 1861):

Fugitive Slave Acts, in U.S. history, statutes passed by Congress in 1793 and 1850 (and repealed in 1864) that provided for the seizure and return of runaway slaves who escaped from one state into another or into a federal territory. The 1793 law enforced Article IV, Section 2, of the U.S. Constitution in authorizing any federal district judge or circuit court judge, or any state magistrate, to decide finally and without a jury trial the status of an alleged fugitive slave.

The measure met with strong opposition in the Northern states, some of which enacted personal-liberty laws to hamper the execution of the federal law; these laws provided that fugitives who appealed from an original decision against them were entitled to a jury trial. As early as 1810 individual dissatisfaction with the law of 1793 had taken the form of systematic assistance rendered to black slaves escaping from the South to New England or Canada—via the Underground Railroad.

The demand from the South for more effective legislation resulted in enactment of a second Fugitive Slave Act in 1850. Under this law fugitives could not testify on their own behalf, nor were they permitted a trial by jury. Heavy penalties were imposed upon federal marshals who refused to enforce the law or from whom a fugitive escaped; penalties were also imposed on individuals who helped slaves to escape. Finally, under the 1850 act, special commissioners were to have concurrent jurisdiction with the U.S. courts in enforcing the law. The severity of the 1850 measure led to abuses and defeated its purpose. The number of abolitionists increased, the operations of the Underground Railroad became more efficient, and new personal-liberty laws were enacted in many Northern states. These state laws were among the grievances officially referred to by South Carolina in December 1860 as justification for its secession from the Union. Attempts to carry into effect the law of 1850 aroused much bitterness and probably had as much to do with inciting sectional hostility as did the controversy over slavery in the territories.

Donald Trump said during the presidential campaign that he wanted to keep “bad hombres” out of the country … But going north across the border has not always been the objective. More than 100 years ago, for example, Americans were escaping into Mexico.

Slaves in the US famously took the underground railroad north into free states and Canada, but a similar path existed to the south into Mexico. Slavery was abolished in Mexico in 1829 by Mexican President Vicente Guerrero, who was of mixed descent, including African heritage.

That’s why, on a cloudy day this winter, Roseann Bacha-Garza is walking through tall grass and trying not to step on tombstones that date back to the mid 1800s at the Jackson Ranch cemetery in San Juan, Texas. She manages the Community Historical Archeology Projects with Schools program at the University of Texas Rio Grande Valley. She says the Jackson family in south Texas played an instrumental role in smuggling slaves into Mexico.

Bacha-Garza says, through her research, she has reason to believe the Jackson family became known for offering slaves refuge, a safe-haven on their paths to freedom.

Bacha-Garza says much of her research comes from oral histories of descendants of families who originally settled on the border during this time period, and through historical documents. She believes, because Jackson Ranch was so close to the Rio Grande, they would help smuggle slaves into Mexico. The Jacksons were religious people trying to do the right thing and did not believe in the Confederate cause.

She says some communities along the border in the US, historically, were empathetic to helping slaves because of events that took place in the past. Bacha-Garza says people who owned land north of the Rio Grande, before the end of the Mexican-American War were Mexican citizens. After the war the region became part of the US. That’s when they had to learn new government rules and often were cheated out of their lands.

Before that, Native American tribes thrived in the region; they lost their land when the Spaniards came and claimed it as their own.

The refusal of Mexico to enforce American laws allowing slavery is documented in academic papers and historical texts, but the descriptor of “little-known” seems apt; many sources to learn more exist behind paywalls. Nevertheless, the tweet and post were accurate. Mexico indeed refused to treat escaped slaves as fugitives under a treaty signed in 1862, and further served as a safe haven for formerly enslaved people who escaped the United States.