The reported said there was “a quite buzz” had begun circulating in New York law enforcement circles about an alleged micro earbud that Clinton had in her left ear during the forum:

The skin-tone piece Clinton was wearing, however, was somewhat different from the standard issued stealth earpiece and is much different in appearance from a hearing aid. This unit is considered a “micro” earbud which contains all the technology but is a fraction of the size with a very high price tag. In fact, most of the units this size, approximately 3mm or comparable to a small pearl stud earring, are normally issued to law enforcement or corporate security teams, sources said. At a size that small, the earbud is designed to sit inside the opening of the ear canal, almost invisible to anyone. However, the unit does move and shift along with its wearer and at times can slightly pop out of the canal and require a quick readjustment, experts said.

The story didn’t name any specific sources within the New York law enforcement community, so we can’t fact-check the report or verify its sources. The primary evidence for the earbud argument appears to be a video segment that shows light reflecting from the inside of Clinton’s left ear. However, it wasn’t clear whether that was skin, an earpiece placed there by NBC producers, or a “micro earbud” that allowed her to hear direction from somebody off the stage.
The Clinton campaign told Fox News that Clinton was not wearing an earipiece and that the shiny reflection was simply light reflecting on the skin inside Clinton’s ear. Nick Merril, a Clinton campaign spokesman, also poked fun of Alex Jones and Donald Trump Jr. for spreading the rumor that Clinton was wearing an earpiece on Twitter: 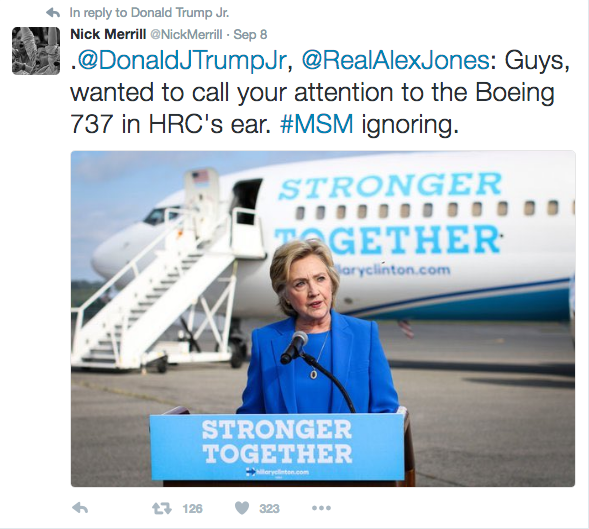 Some have noted that earbud flap is very similar to controversy that played out in the 2004 campaign. George W. Bush was accused of wearing a listening device during the debate that was visible as a square bulge in the back of his suit jacket. A NASA photo analyst even weighed in on the controversy, and some believe to this day that Bush was wearing a listening device even though a spotty photo was the only proof of that
Much like the Bush controversy of 2004, there’s no proof that Clinton was wearing an earpiece during at the 2016 forum beside a zoomed in photo. If history repeats, however, that likely won’t stop rumors or speculation about it among Clinton’s critics for years to come.
Given a lack of evidence, we’re calling this one “unproven.”