It seems as though there may be more than the normal forces at play here.

Former Governor of Alaska Sarah Palin was the victim of a horrendous crime this morning while driving to meet a friend on the Pacific Coast Highway. She was run off the road in what authorities are calling a hit-and-run and nearly killed. The SUV she was driving rolled over several times and ended up in a drainage ditch.

Governor Palin was taken to a local hospital under an alias in case the hit and run was on purpose and not a random act of reckless driving. According to her spokesman, she is currently in a coma with 2 broken vertebrae and a broken thigh.

These reports were accompanied by a photo of an SUV overturned in a drainage ditch beside a highway that was presumably the vehicle that Sarah Palin was driving at the time of the hit-and-run. However, the photo was actually taken at the scene of a fatal accident in Birmingham, Alabama, in 2015. Of course, that accident did not involve Sarah Palin: 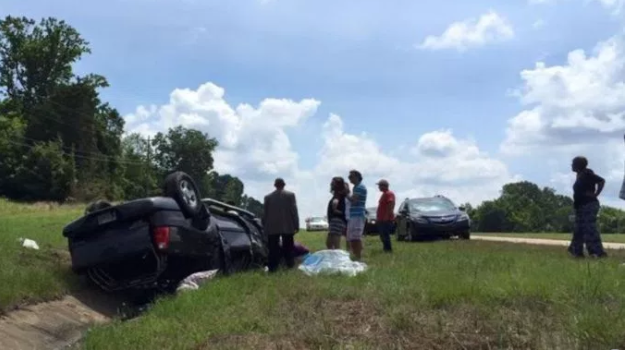 Reports that Sarah Palin was in a coma after a hit-and-run gained new legs on May 1 when a fake news follow-up report claimed that Palin had emerged from the coma and had identified her attackers:

Sarah Palin is way too strong a woman to let something like this get the best of her.
Governor Sarah Palin, who was run off the road Friday on the Pacific Coast Highway, woke up this morning and is in great spirits. Battered and bruised physically, she remains as smart as a whip and was able to identify the vehicle that ran her off the road, complete with license plate.
Again, the follow-up report about Palin awaking from her coma appeared a range of pop-up fake news websites. One such site, WorldTopStory.info, was created in February 2017 by a registered user in Panama. Again, these follow up reports use the same photo that actually shows the 2015 traffic accident outside Birmingham.
These reports should be considered “false.”