Summary of eRumor:
Wild boars killed three ISIS terrorists who were hiding in heavy vegetation before a planned ambush outside the city of Kirkuk, Iraq.
The Truth:
Three ISIS fighters were mauled by wild boars in Iraq, but key details in reports about the mauling differ, calling into question which version of the story is accurate.
The report first appeared at the Iraqi publication Alsumaria News on April 23, 2017, under the headline, “Wild boars kill three “Daesh” south of Kirkuk.” The report uses an alternative name for ISIS, “Daesh”: 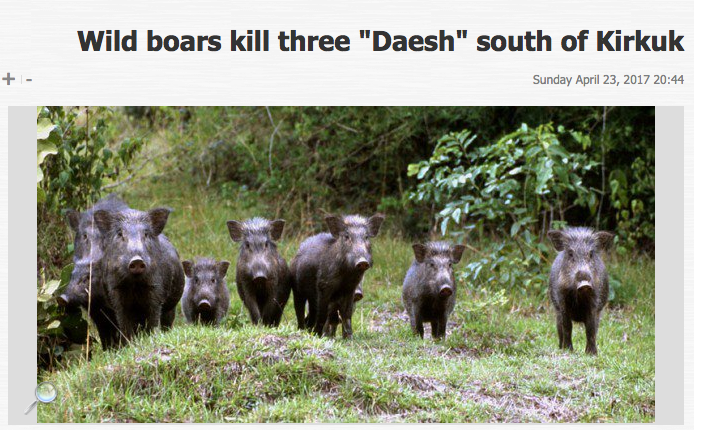 By April 25, the United Kingdom’s Telegraph newspaper picked up the story in a report appearing under the headline, “Wild boars maul Isil fighters to death in Iraq.” That report cites the deputy head of Kurdish intelligence service in Kirkuk:

Wild boars mauled three Islamic State (Isil) fighters to death near the Iraqi city of Kirkuk, according to Kurdish fighters.

The jihadists’ bodies were found badly mangled by refugees fleeing through farmland as they tried to get away from Isil territory in al-Rashad, southwest of the city.

Isil fighters responded to the deaths by going on a killing spree of wild boars in the area, said Brigadier Azad Jelal, the deputy head of the Kurdish intelligence service in Kikurk.

“Three fighters from Isil were near the Peshmerga checkpoint in al-Rashad. They met some feral boars and the boars killed the three fighters,” he told The Telegraph.

“Some refugees saw the bodies on the edge of a farm when they were fleeing and they told us. A few days later Isil started to kill pigs around the area.”

Brigadier Jelal said the three men may have been trying to defect from Isil and were trying to get near a Kurdish checkpoint to surrender. He said the refugees did not see any weapons with the bodies, suggesting they had come unarmed.

He said his forces had not tried to recover the bodies because of ongoing fighting in the area. Isil is believed to have taken the bodies back when they began shooting boar around al-Rashad.

Versions of the mauling that appeared in American publications like the New York Post and Newsweek tell a different version of the story. In those versions, eight ISIS fighters (not three) were waiting to ambush anti-ISIS tribesmen (not trying to defect from the terrorist group) at the time of the boar attack. Three were killed, while five were supposedly injured, Newsweek reports:

Three militants loyal to the Islamic State group (ISIS) have been killed by wild boars as they planned to ambush Iraqi tribesmen opposed to the group, according to a local anti-ISIS leader.

At least eight ISIS fighters had reportedly taken cover among dense reeds in Iraq’s al-Rashad region, about 55 miles southwest of Kirkuk, in preparation for a surprise attack on local anti-ISIS tribesman when a herd of wild boars attacked the jihadists on Sunday, killing three. The militants likely disturbed the notoriously short-tempered animals, said Sheikh Anwar al-Assi, a chief of the local Ubaid tribe and head of the group of local tribesmen who took up arms after ISIS took control of the nearby town of Hawija.

It’s not clear which version of the story about wild boars killing ISIS terrorists is true. In all versions of the story, three men affiliated with ISIS were mauled by wild boars. Other details can’t be confirmed. That’s why we’re calling this one “truth” and “unproven.”