"Escaping slaves used to throw balls of fried cornmeal out to distract the hounds from tracking them. The hound stopped barking and tracking thanks to the cornmeal which later adopted the name 'hush puppies.'"

On February 12 2022, a Facebook user shared the following post, which purportedly describes how “hush puppies” got their name:

Escaping slaves used to throw balls of fried cornmeal out to distract the hounds from tracking them. The hound stopped barking and tracking thanks to the cornmeal which later adopted the name “hush puppies”. ✊🏾 #BlackHistory 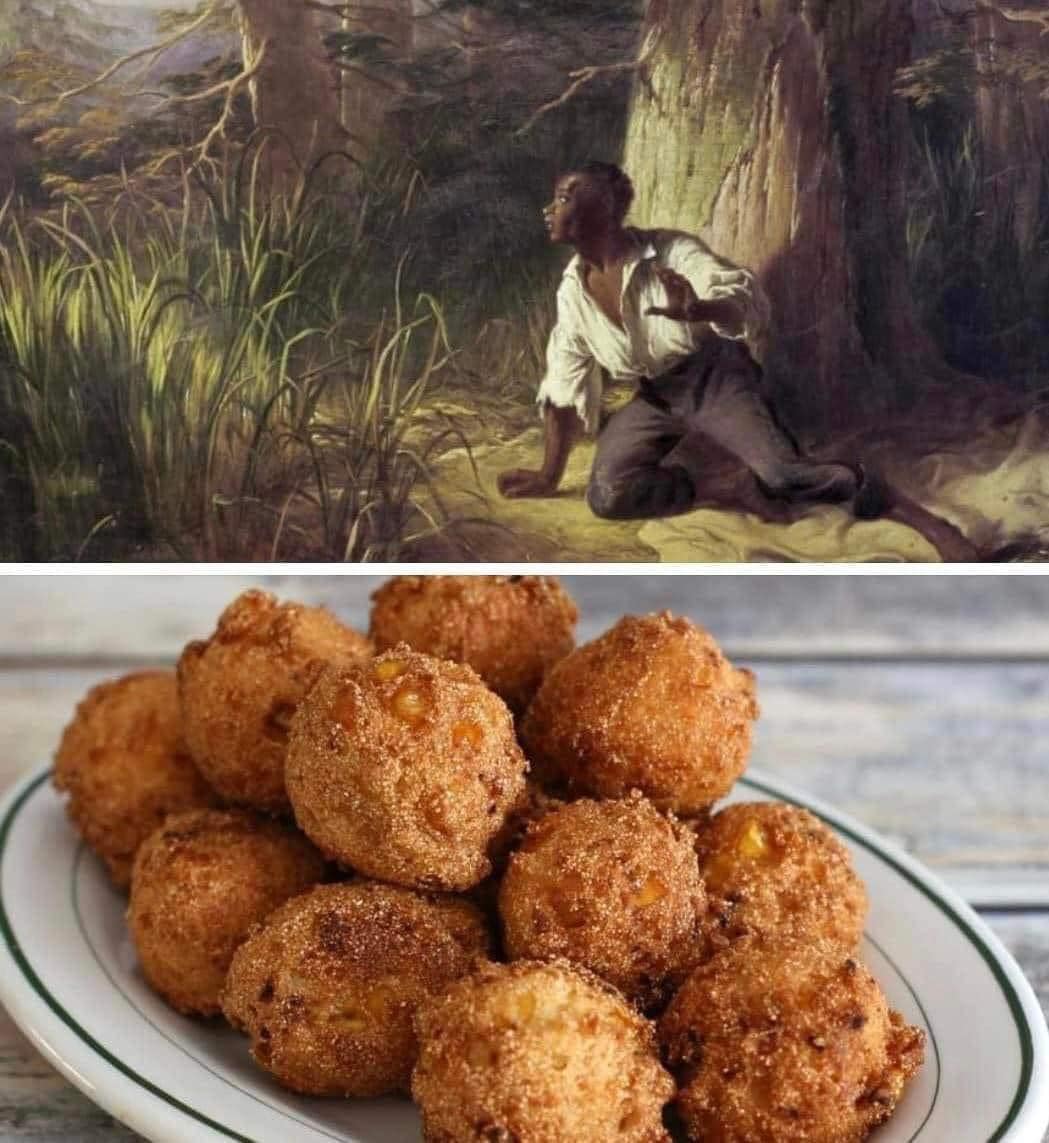 Further, a primary result for a search on the etymology of “hush puppies” led to a Brittanica.com entry that appeared to somewhat substantiate the claims in the post:

hush puppy, a deep-fried or baked ball of cornmeal batter and spices, usually served as a side dish. Hush puppies are believed to have originated in the southern United States, where they are a traditional dish. They are typically made with cornmeal, flour, egg, buttermilk, baking soda, and onion, though various spices and other ingredients—including garlic and peppers—can be added. The batter is shaped into golf-ball-sized portions and fried or baked. One possible explanation for the name is that a simple version of the dish was first made by various people—such as Union soldiers during the Civil War, fishermen, or runaway slaves—to quiet howling dogs.

Although the source was credible, the attribution to enslaved people escaping was described as a “possible” explanation. Other “possible” explanations included “Union soldiers during the civil war” and “fishermen,” who were also trying to apparently use the fried balls of cornmeal to distract or silence dogs.

On February 13 2022, a similar post appeared on Reddit’s r/todayilearned: “TIL Escaping slaves use to throw balls of fried cornmeal out to distract plantation hounds from tracking them. The hounds stopped barking and tracking thanks to the cornmeal which later adopted the name ‘hush puppies'”:

TIL Escaping slaves use to throw balls of fried cornmeal out to distract plantation hounds from tracking them. The hounds stopped barking and tracking thanks to the cornmeal which later adopted the name “hush puppies”. from todayilearned

The submission was tagged as being in violation of the subreddit’s first rule and “not verifiable.” It linked to the Brittanica.com entry quoted above, and the top comment observed:

I.e., no proof or evidence this is the etymology, it’s likely just a story.

On February 18 2022, a very credible source weighed in on the matter — culinary historian Michael W. Twitty, via Twitter. Twitty explained that the post on Facebook was “nonsense,” as well as “social media disinformation,” and that the dish had origins in indigenous American cuisine as well as having African Atlantic roots:

#hushpuppies
This post on Facebook is nonsense.
As a historical interpreter of enslaved lives, this is social media disinformation. Hushpuppies are a fritter with roots in Indigenous American and African Atlantic foodways. They were not known to be used by freedom seekers. pic.twitter.com/5RgRdKunOr

Twitty’s claim was echoed in a long-form November 2021 profile about hush puppies in the Southern culinary publication The Southeastern Dispatch. In “The True Story of Hushpuppies, a Genuine Carolina Treat” (subtitled “No barking dogs required”), editor Robert F. Moss delved into the history of the dish, including a section titled “The Absurd Conjecture.”

Moss referenced a common theme in folk etymology — retrofitting a story to an existing phrase in use:

There is an entire category of food origin myths that I like to call “absurd conjectures.” I borrowed the phrase from the editors of the Oxford English Dictionary. Its entry on “barbecue” notes a popular story that claims the word derives from the French barbe-a-queue, or “beard to tail”—a reference to the early practice of cooking whole pigs. The editors curtly dismiss this notion as “an absurd conjecture suggested merely by the sound of the word.”

The same can be said about the many supposed derivations of hushpuppy. Most explanations seem to have started with the name itself and from there spun a tale of how the food might have come to be called that.

The earliest effort in this line that I can find appeared in 1933 in an Associated Press story on the arrival of the cotton harvest in Mississippi. The writer catalogs the chants and songs of African American laborers then closes by describing a post-harvest meal of fried fish, baked yams, and “hushpuppies.” These, the writer explains are “a step-child to a corn pone. Years ago when the hounds and the puppies would whine for food, the folks would toss them a bit of home-cook bread. The puppies would hush, so they called the bread ‘hushpuppies.’” … But here’s the catch: not only were people deep frying cornmeal batter long before they called it a hushpuppy, they were also using the word for other things long before it arrived at the fish fry.

It’s downright distressing the extent to which food writers blithely repeat these stories without any effort to determine their veracity. They rattle them off, chuckle a little, then just shrug their shoulders and say, “Oh, well, here’s a recipe!”

And I’m not just talking about bloggers or listicle-compilers, from whom you might expect such slapdashery. I’m talking about academic press authors and writers for supposedly serious periodicals like The Atlantic, for whom Regina Charboneau directly abjured any need to dig into the matter. “When it comes to the history of Southern food,” she writes, “it is often difficult to separate fact from fiction, but with many Southern dishes the separating is not worth it, since the folklore adds a lot of charm and allure.”

Balderdash. Separating the fact from the fiction is inherently worth it. There’s nothing charming about being wrong. If we blindly accept the folklore about Southern cuisine, we’re missing out on real stories that are so much more interesting than a bunch of made-up nonsense. In cases like the old mammy story, we’re perpetuating damaging stereotypes, even if we do excise the dialect and other offensive trappings.

Hushpuppies are a fine example of this intellectual laziness in action. So let’s look into where they really came from.

Southerners have been eating tasty balls of fried cornmeal batter for quite some time, though they didn’t call them hushpuppies at first. At least two decades before “hushpuppy” appeared in print, South Carolinians were enjoying what they called “red horse bread.” It wasn’t red in color, and it had nothing to do with horses. Red horse was one of the common species of fish (along with bream, catfish, and trout) that were caught in South Carolina rivers and served at fish frys along the banks.

Finally, a Native Heritage Project entry delved more into the indigenous American aspect to the meal:

Native Americans were using ground corn for cooking long before European explorers arrived in the New World. The jonnycake originates with the native inhabitants of Northern America; the Algonquians of the Atlantic seaboard are credited with teaching Europeans how to make the food.

Southern Native American culture (Cherokee, Chickasaw, Choctaw, Creek) is the “cornerstone” of Southern cuisine. From their culture came one of the main staples of the Southern diet: corn (maize), either ground into meal or limed with an alkaline salt to make hominy, also called masa, in a Native American technology known as nixtamalization. Corn was used to make all kinds of dishes from the familiar cornbread and grits to liquors such as whiskey and moonshine, which were important trade items. Cornbread was popular during the American Civil War because it was very cheap and could be made in many different sizes and forms. It could be fashioned into high-rising, fluffy loaves or simply fried for a fast meal.

To a far greater degree than anyone realizes, several of the most important food dishes that the Southeastern Indians live on today is the “soul food” eaten by both black and white Southerners. Hominy, for example, is still eaten … Sofkee live on as grits … cornbread [is] used by Southern cooks … Indian fritters … variously known as “hoe cake”, … or “Johnny cake.” … Indian boiled cornbread is present in Southern cuisine as “corn meal dumplings”, … and as “hush puppies”, … Southerners cook their beans and field peas by boiling them, as did the Indians … like the Indians they cure their meat and smoke it over hickory coals.

A viral February 2022 Facebook post claimed hush puppies got their name because people escaping enslavement “used to throw balls of fried cornmeal out to distract the hounds from tracking them.” While that explanation is listed as one of many “possible” origins on Brittanica.com, culinary historians and writers have long disputed the claim. Not long after the post spread virally, culinary historian Michael W. Twitty noted that as an “historical interpreter of enslaved lives, this is social media disinformation.” Twitty added that “Hushpuppies are a fritter with roots in Indigenous American and African Atlantic foodways,” and that they “were not known to be used by freedom seekers.”