A huge crocodile -- 21 feet long and weighing 4,500 pounds -- was photographed after being found in the streets of New Orleans after Hurricane Katrina.

Among the disinformation and urban legends that circulated online in the wake of Hurricane Katrina in August 2005 was a chain email and photo that served as a precursor to meme culture.

The story, often passed around with the subject line “Wow, Now this is a big crocodile Believe it or not!,” centered around a gigantic reptile allegedly being fished out of the streets of New Orleans while a group of men looks on. The email read:

Now this is a Crocodile! This crocodile was found in New Orleans swimming down the street. 21 FT long, 4,500 lbs, around 80 years old minimum.

Specialists said that he was looking to eat humans because he was too old to catch animals. This crocodile was killed by the army last Sunday at 3:00 pm, currently he is in the freezer at the Azur hotel. The contents of its stomach will be analyzed this Friday at 2:30 p.m. 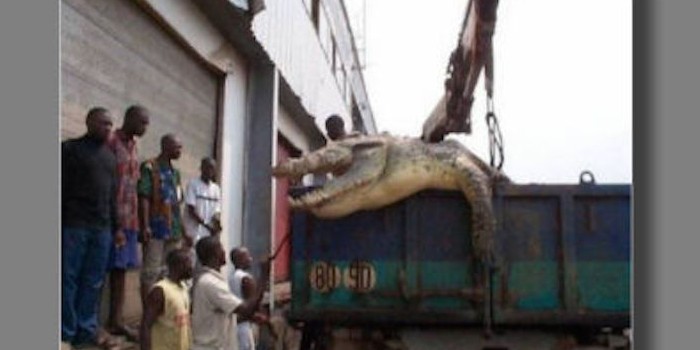 The use of “Azur Hotel” is the tell in this case; there is no hotel by that name in New Orleans.

The photograph is real, but more credible accounts place the encounter between the crocodile and the men on the boat in the port of Pointe-Noire in the Republic of the Congo.

However, while the crocodile was big, it was estimated to be closer to five meters long (about 16 feet) and weighing around 850 kilos (1873 pounds) and closer to 50 years old, rather than 80.

The legend of the giant crocodile was among the more benign bits of internet content to come out after Katrina, a hugely destructive 2005 hurricane that caused the deaths of an estimated 1,833 people while leaving millions of people in New Orleans as well as other Gulf Coast states homeless.

Outside of that, however, corrosive disinformation flowed freely as the storm made its way through the city. Less than a month after the disaster, New York Times media critic David Carr noted that several media outlets aired stories based on unsubstantiated rumors rather than actually reporting them out:

The Fox News anchor, John Gibson, helped set the scene: “All kinds of reports of looting, fires and violence. Thugs shooting at rescue crews. Thousands of police and National Guard troops are on the scene trying to get the situation under control. Thousands more on the way. So heads up, looters.” A reporter, David Lee Miller, responded: “Hi, John. As you so rightly point out, there are so many murders taking place. There are rapes, other violent crimes taking place in New Orleans.” After the interview, Mr. Gibson did acknowledge that “we have yet to confirm a lot of that.”

Lt. Gen. Russel Honoré (now retired), who led the U.S. Defense Department’s joint task force responding to the crisis, also cited “a constant reaction to misinformation” as a problem for his efforts.

“Some of the [media] were giving information that wasn’t correct,” he told The Guardian at the time. “Much of it was uncorroborated information probably given with the best of intentions.”

Years later, the Congan crocodile would find a successor of sorts in the viral photograph of “Highway Shark,” a shark allegedly spotted swimming in the middle of a flooded Texas highway after Hurricane Harvey:

Believe it or not, this is a shark on the freeway in Houston, Texas. #HurricaneHarvy pic.twitter.com/ANkEiEQ3Y6

In reality, this photograph would become just one of a long line of images based on a real photograph taken by Thomas Peschak years earlier for a project on white sharks.

“I always look forward to receiving e-mails from friends and family who have spotted the same white shark in a different context,” Peschak later wrote about his subject’s brushes with online fame. “While I will probably never become a legend in my own right, at least my white shark is well on her way.”