A February 14 2020 tweet about “socialism” and a putative $50,000 wage earner paying $36 in tax towards food stamps and $4,000 towards corporate subsidies went wildly viral, appearing in screenshots on Facebook and discussion forums in the following days:

Attempting to make the point Americans believed they “hated socialism” while unknowingly already tolerating it, it read:

So, you hate socialism, ya say?

Twitter doesn’t make the inclusion of citations easy due to its character limits, and the tweet had none. In its replies, different version of similar or identical ck appeared:

Another long-circulating version had more detail, but like the tweet and response, contained the same two figures: $36 in taxes paid for food stamps, and $4,000 paid for corporate subsidies: 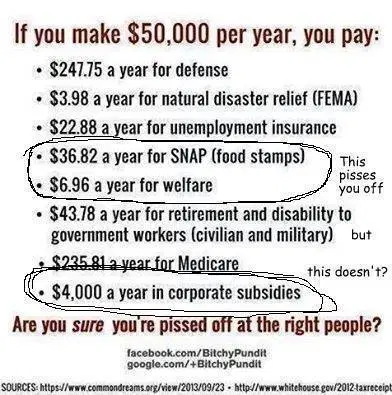 Right off the bat, some clear contextual information was absent from the breakdown of figures was markedly implausible. A $50,000 wage earner with a spouse and children, for instance, carried a far different tax burden than the same $50,000 wage earner who was unmarried and without children — and those figures again varied wildly between states. If accurate, the figures could have been averaged or otherwise weighted, but without a clear source, they could just have easily been plucked from the ether.

In the third example above, two “sources” were cited — a 2013 post on the progressive site Common Dreams, and “https://www.whitehouse.gov/2012-taxreceipt.” The second of the two links led to a “page not found” error,” but the link was archived.

Unfortunately, it appeared the archived page was at one time a calculator, now offline and largely not functional. Remaining on the page were percentages broken down for all tax revenue collected and spent on government functions.

Those categories were as followed in percentage of total income tax collected:

Obviously, none of the categories on the 2012 Tax Receipt calculator were labeled “corporate subsidies,” but one was labeled “Food and nutrition assistance,” likely the Supplemental Nutrition Assistance Program, or SNAP, or “food stamps.” Its percentage was 3.89, but without a ballpark estimate of total tax paid on $50,000, it was difficult to validate the $36 figure outright.

As for the Common Dreams item in question, it was published in September 2013, titled “Add It Up: The Average American Family Pays $6,000 a Year in Subsidies to Big Business.” The claim here was that the average American subsidized “big business” to the tune of $6,000, not $4,000.

Although Common Dreams is a progressive website, its basis for the piece was information published in 2012 by libertarian-leaning think tank the Cato Institute (founded in part by Charles Koch), and the article began:

That’s over and above our payments to the big companies for energy and food and housing and health care and all our tech devices. It’s $6,000 that no family would have to pay if we truly lived in a competitive but well-regulated free-market economy.

The $6,000 figure is an average, which means that low-income families are paying less. But it also means that families (households) making over $72,000 are paying more than $6,000 to the corporations.

One of the two sources — the Common Dreams piece from 2013 — included some very fluid estimates, by their own admission:

The Cato Institute estimates that the U.S. federal government spends $100 billion a year on corporate welfare. That’s an average of $870 for each one of America’s 115 million families. Cato notes that this includes “cash payments to farmers and research funds to high-tech companies, as well as indirect subsidies, such as funding for overseas promotion of specific U.S. products and industries…It does not include tax preferences or trade restrictions.”

It does include payments to 374 individuals on the plush Upper East Side of New York City, and others who own farms, including Bruce Springsteen, Bon Jovi, and Ted Turner. Wealthy heir Mark Rockefeller received $342,000 to NOT farm, to allow his Idaho land to return to its natural state.

It also includes fossil fuel subsidies, which could be anywhere from $10 billion to $41 billion per year for research and development. Yet this may be substantially underestimated. The IMF reports U.S. fossil fuel subsidies of $502 billion, which would be almost $4,400 per U.S. family by taking into account “the effects of energy consumption on global warming [and] on public health through the adverse effects on local pollution.” According to Grist, even this is an underestimate.

As the information in the article transitioned to meme format, it’s possible the “would be almost $4,400 per U.S. family” line evolved into “each individual American taxpayer contributes $4,000 of $50,000 to corporate subsidies,” even though that particular line was speculation stacked upon speculation.

So how much in tax does a $50,000 wage earner pay? Is there some sort of average? A 2017 Motley Fool article (“How Much Income Tax Will I Pay if I Make $50,000?”) about different tax scenarios notes that a number of factors made it near impossible to tack a tax rate to an average salary, but outlays two different taxation scenarios to make some estimates:

Two factors arguably play the largest role in what your tax liability will be: your filing status and the number of family members you have in your household. In general, the smaller your household is, the more tax you’ll pay for a given income figure.

As an example, take a single person making $50,000 per year. We’ll assume that this person has no children or other dependents and has insufficient itemized deductions to justify not taking the standard deduction. To keep things simple, we’ll also assume that all of this person’s income comes from a regular job with an employer.

To see just how different a tax situation can be, take a similar example but with a much different family structure. Instead of a single person, say that you have a married couple with two children with total household income of $50,000. In order to make comparisons simpler, we’ll keep the rest of the assumptions the same: taking the standard deduction with all income coming from regular job pay.

In this situation, you start with the same $50,000 in gross income, but the standard deduction is twice as much at $12,700. Two spouses and two children add up to four personal exemptions, which at $4,050 each reduces your taxable income by $16,200. That yields just $21,100 in taxable income. Under the married joint filer rate structure, that puts you barely into the 15% bracket, and the initial tax calculation yields just $2,232.50 in taxes.

Yet that’s just the start. Assuming that the two children qualify for the child tax credit, this family can reduce their tax burden by another $2,000. That brings the total tax bill down to just $232.50, and the effective tax rate on their $50,000 income is less than 0.5%.

It goes without saying that the second wage earner was not paying $4,000 in tax to corporate subsidies, since they paid only $232.50 when credits applied for their two children. And even if we look at the $5,638.50 estimate applied to the first unmarried $50,000 wage earner, $4,000 was 70 percent of the total tax they’d pay in that scenario.

Ultimately, we tried to tack the tweet and meme’s claims “if you make $50,000/year, $36 of your taxes goes to food stamps[and] $4,000 goes to corporate subsidies” to any sort of known breakdown of taxes paid and spent on services, but neither figure seemed rooted in reality. We were unable to specifically validate the $4,000 in corporate subsidies claim, because none of the categories on the source of a tax receipt were explicitly labeled “corporate subsidies.” It was true that the overall share of tax paid to fund SNAP or food stamps was a relatively low 3.89 percent, per the source, but that only worked out to $36 if a person paid $900 in total tax. Because so much has changed since the original articles appeared, and because the original articles relied on fuzzy math by their own admission, we rate this claim Not True.