On r/LateStageCapitalism, the chart was shared on June 29 2020, titled “We. Are. Fucked. ….. unless we use a convention of states”:

We. Are. Fucked. ….. unless we use a convention of states from LateStageCapitalism

If accurate, it was likely the charts represented a snapshot in time. However, the lack of contextual information was limiting, and it wasn’t clear when the images were created.

That post appeared to feature a screenshot of the above tweet, with the same text appearing above the charts. Clockwise from the top left of the charts were the United States, France, Italy, and Spain. No source was provided for the chart either on Twitter or in the original post to r/LateStageCapitalism.

All four countries demonstrated a similar initial trajectory. Cases in February and March were minimal, spiking dramatically in April. France, Italy, and Spain all seemed to begin dropping in cases in April and May, with June roughly equivalent to early March for those three. In essence, France, Italy, and Spain experienced a COVID-19 spike in April 2020, returning to near-normal by June 2020.

By contrast, the United States’ vertical axis itself was different — 100,000 versus 5,000 cases. And where France, Italy, and Spain seemed to both peak and begin falling in April, the United States seemed to plateau at the point where other countries began dropping.

On top of that, the plateau appeared not to remain as such. Between May 2020 and June 2020, cases on the chart began yet another steady spike upwards, trailing upwards still as the horizontal axis of June 2020 trailed off.

Each country’s estimated population on July 2 2020 was as follows:

If the charts were accurate and correctly described, the United States appeared to demonstrate 3.44 times the per capita rate of COVID-19 infections:

Did Trump Say There Are ‘Many Per Capitas’ During a COVID-19 Discussion?

In the Reddit thread linked above, u/grilledchzisbestchz wisely requested a source for the data — after all, any information could be dumped into chart form to make a point:

In response, u/alt228 linked to a New York Times “Coronavirus Map,” and u/trahoots explained that the chart labeled “U.S.A.” was in fact “total global cases.” However, u/trahoots also said the “actual comparison” looked “basically as bad” as the mislabeled chart and shared another image: 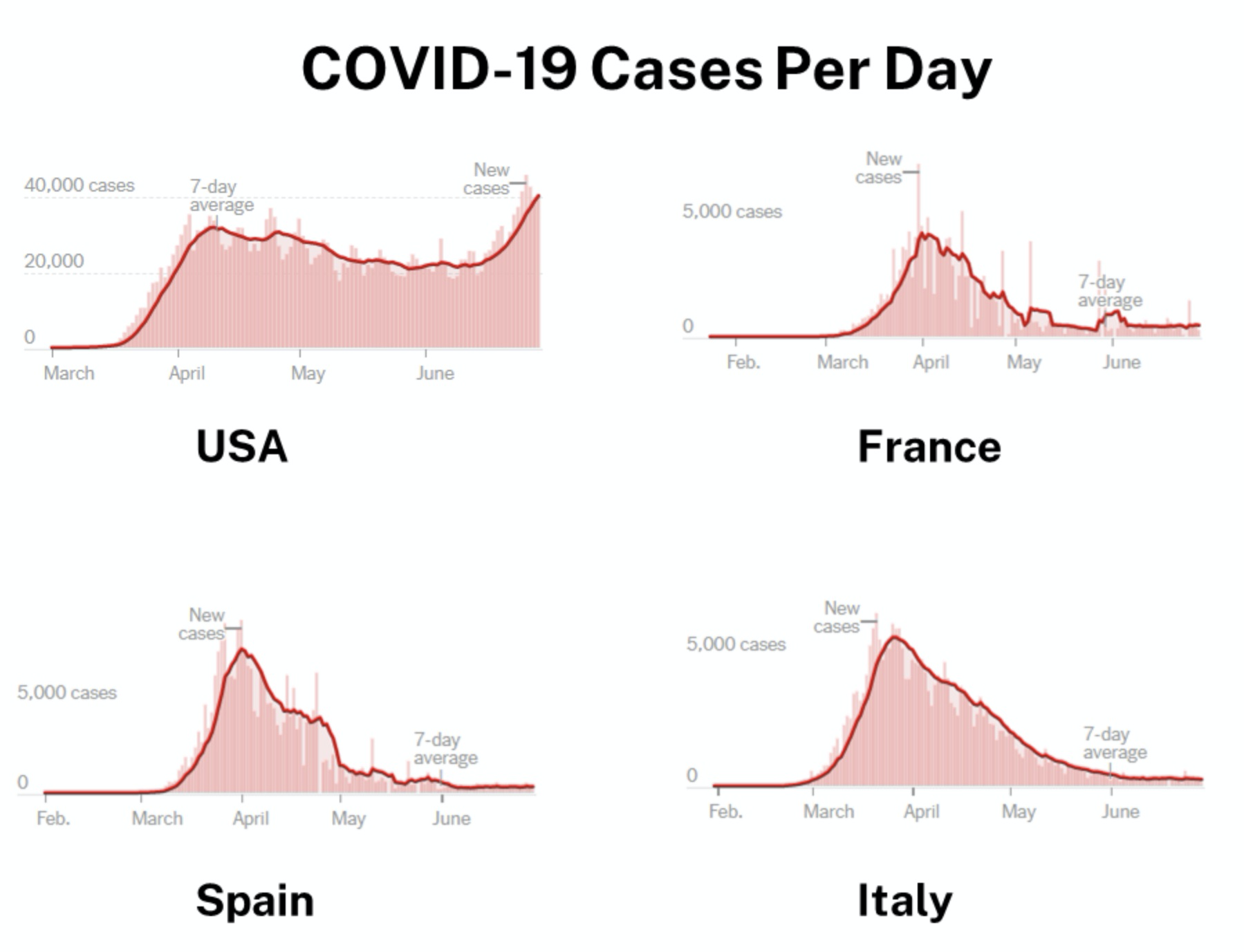 In the screenshot, France, Italy, and Spain still peaked and fell in April, and the United States showed a slight drop in what could still accurately be described as a plateau. But by the middle of June 2020, the number of cases rose to higher than the first spike in April 2020.

The New York Times‘ ‘Coronavirus Map: Tracking the Global Outbreak’ Page, and Charts as of July 2 2020

Here are the charts as they appeared on July 2 2020 — first, Italy, which was similar to the viral four-chart image: 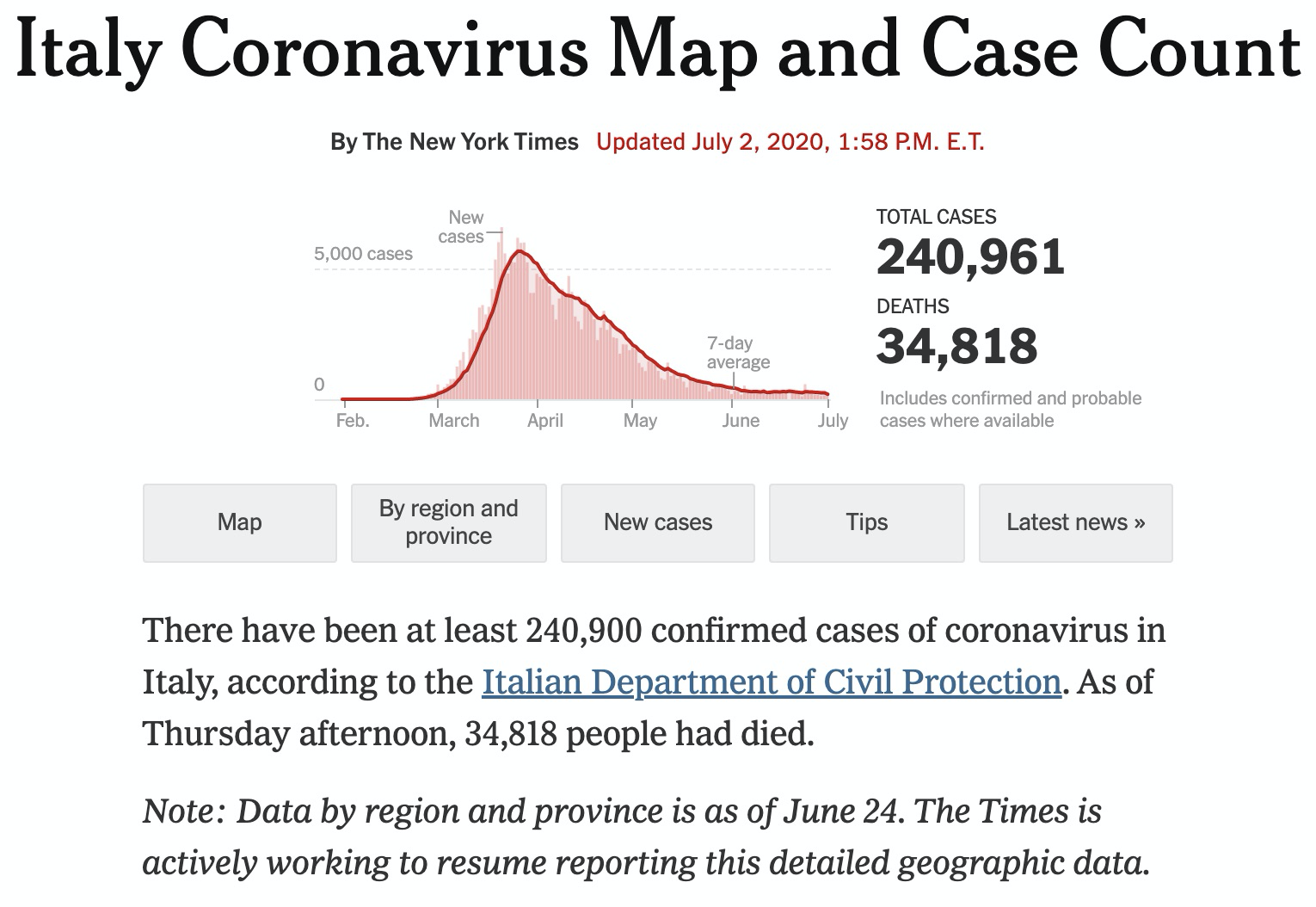 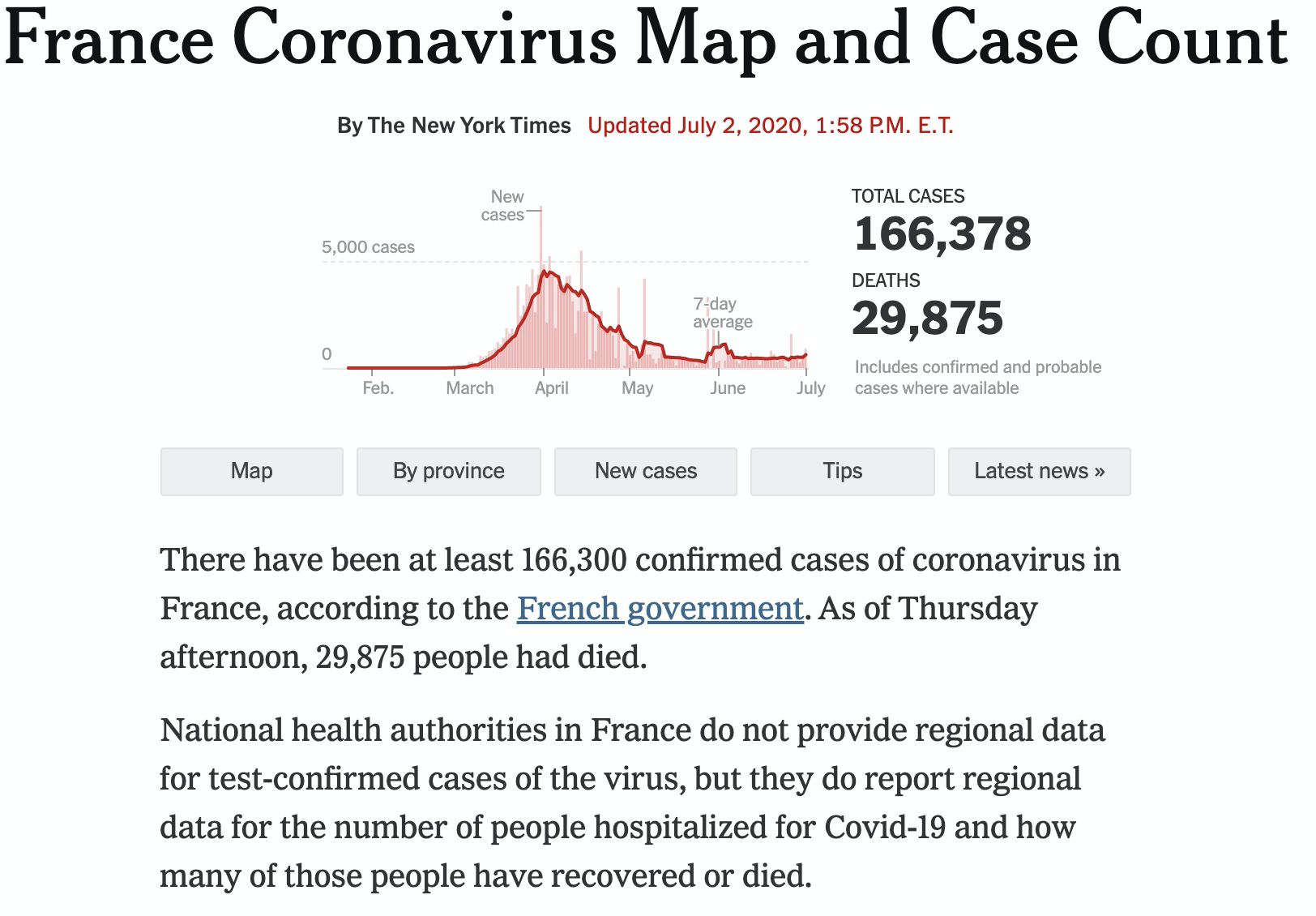 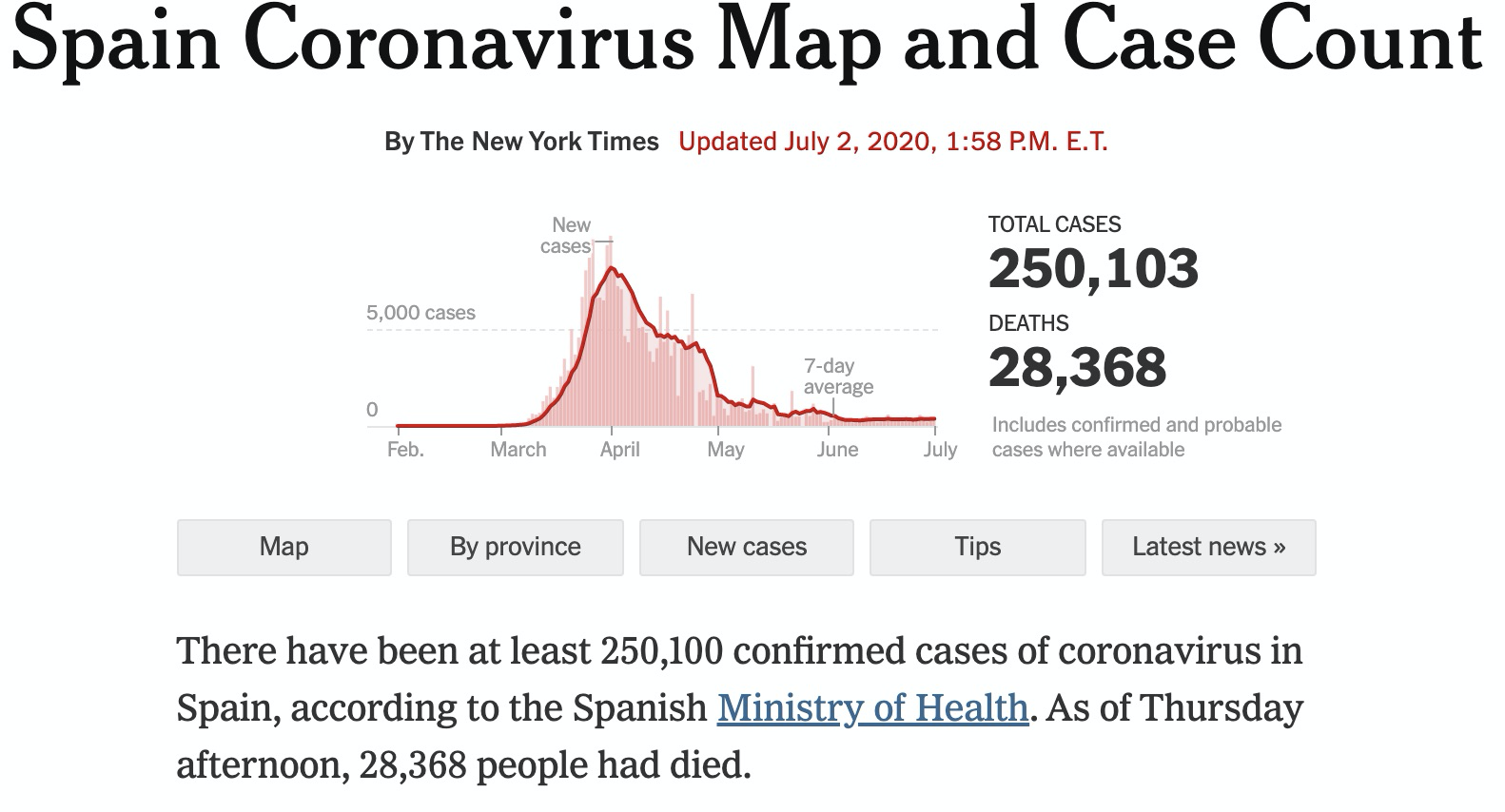 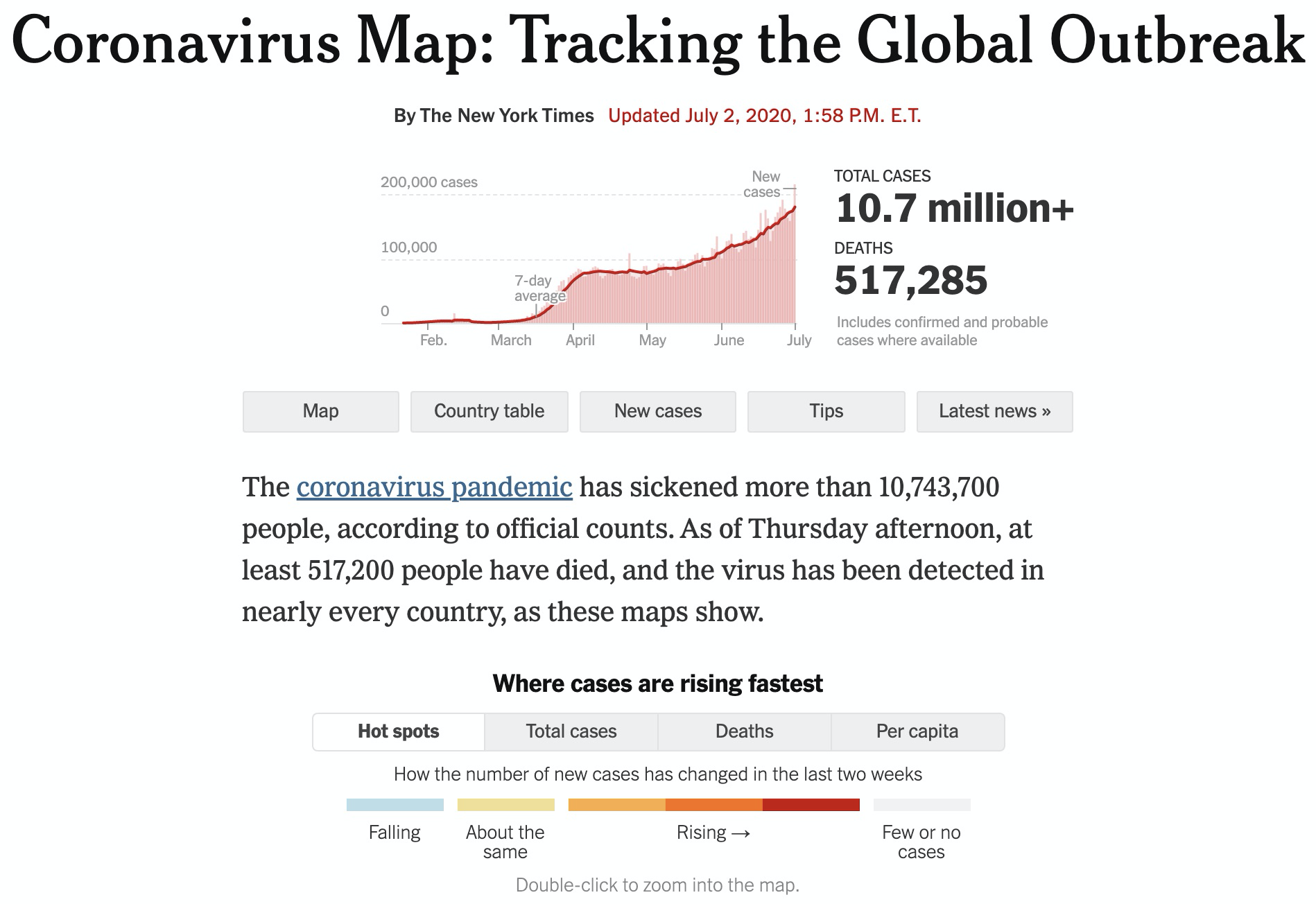 As the user indicated, the “global cases” chart closely resembled the chart labeled “U.S.A” in the initial tweet.

The Times‘ interactive map for cases in the United States was slightly different, showing a slight decline beginning in May 2020 through June 2020. From there, the chart showed an alarming and sharp incline over and above the April 2020 peak as the chart bled into July 2020 (and a vertical axis between 20,000 cases and 40,000 cases; the adjusted average per capita would be roughly 29,000 cases to 5,000 in the three European nations): 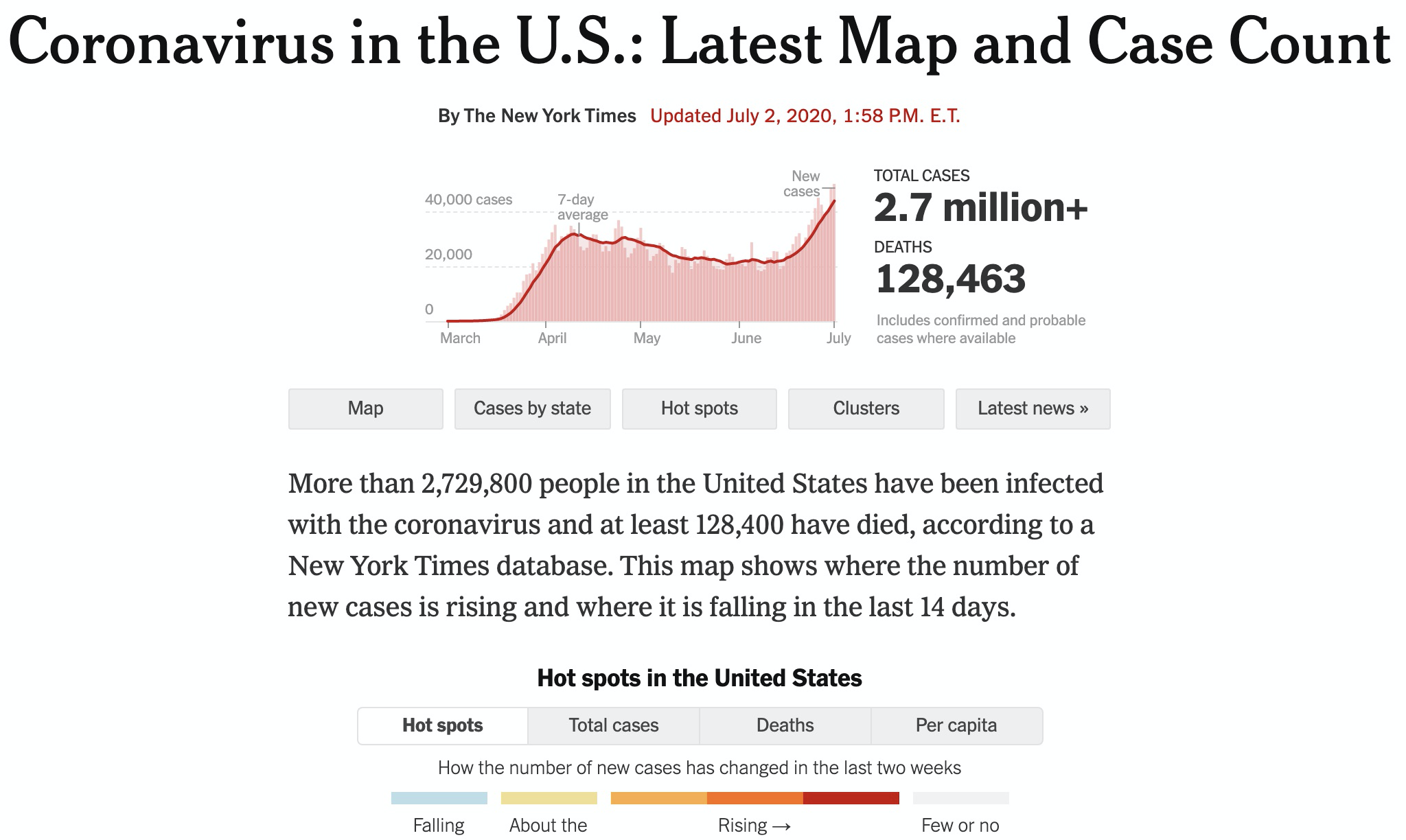 Is the ‘In Case You’re Wondering What Utter, Abject Failure Looks Like’ Accurate?

Ultimately, the answer is “yes and no.” Almost certainly, all four charts — the US, France, Italy, and Spain — were screenshots of the New York Times’ interactive “Coronavirus Map” feature. As u/trahoots discovered, the chart labeled “U.S.A.” was in fact global cases. France, Italy, and Spain were all nearly identical on the map on July 2 2020, and the “global cases” chart resembled the graph for the United States. The actual United States graph was very similar to the “global cases” graph, albeit with a slight reduction in cases between May and June 2020. By the middle of June 2020, the case rate began spiking higher than its first April 2020 peak.