The word "bar" is an acronym for "beer and alcohol room."

A meme with the claim that the word “bar” is an acronym for “beer and alcohol room” suddenly appeared in late December 2018: 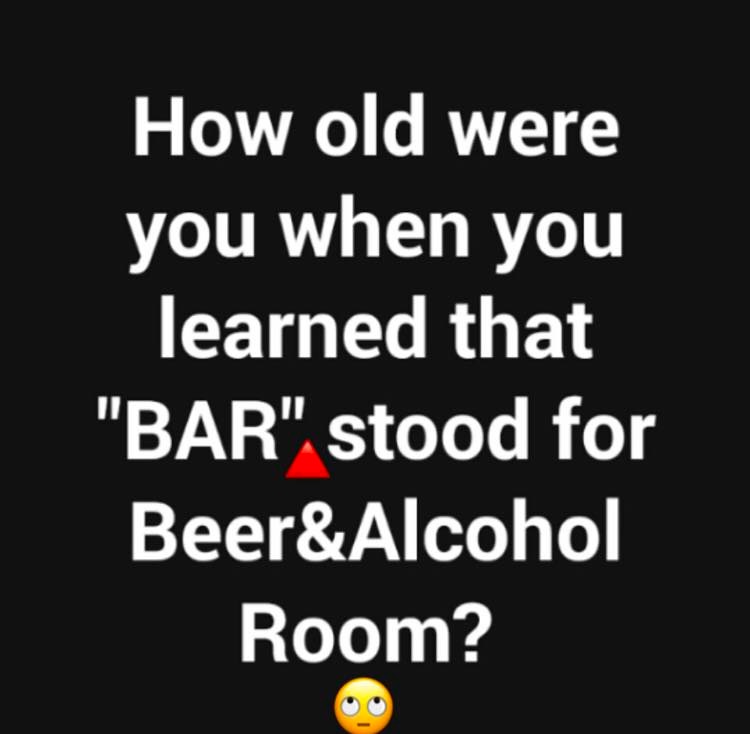 The meme was virtually identical in both presentation and format to a similar post claiming the word “hospital” had a similar etymology; this version also utilized the “today years old” theme. It was captioned “Don’t lie either 😒,” and it read:

How old were you when you learned that “BAR” stood for Beer & Alcohol Room?

These types of amusing (but often baseless) claims about the supposed etymology of common words are very popular on social media, possibly because they’re almost certain to rack up likes, shares, and engagement in the form of comments. (The “bar = ‘beer and alcohol room'” version delivered, with tens of thousands of shares.) Overwhelmingly, the backronym (a back-formed word construction purporting to be a legitimate acronym) was favored in this style of post. Some are solely humorous in intent, but others are folk etymology or outright falsehoods.

As with the “hospital” claim, we were unable to locate any evidence that “bar” stood for “beer and alcohol” room that predates the meme displayed above, although there are prominent searches for the question “What is the acronym for bar?” But the context of the word “bar” in that post was unclear, as there were multiple other meanings for it — such as state bar examinations, or metal bars. We were unable to locate any existing claims that the word “bar” (as it relates to an establishment serving primarily alcoholic beverages) was ever believed sincerely to be an acronym for anything at all.

The etymology of the word “bar” in all its variations (a tavern, a steel rod, a line on a graph) appeared to be consistent:

Overall, dictionaries (and etymology blogs) appeared to be in agreement that the use of “bar” in that context was “so called in reference to the bars of the barrier or counter over which drinks or food were served to customers.” Even when terms such as “saloon” or “tavern” were in favor, the area in which beverages were served was typically described as the “bar.”