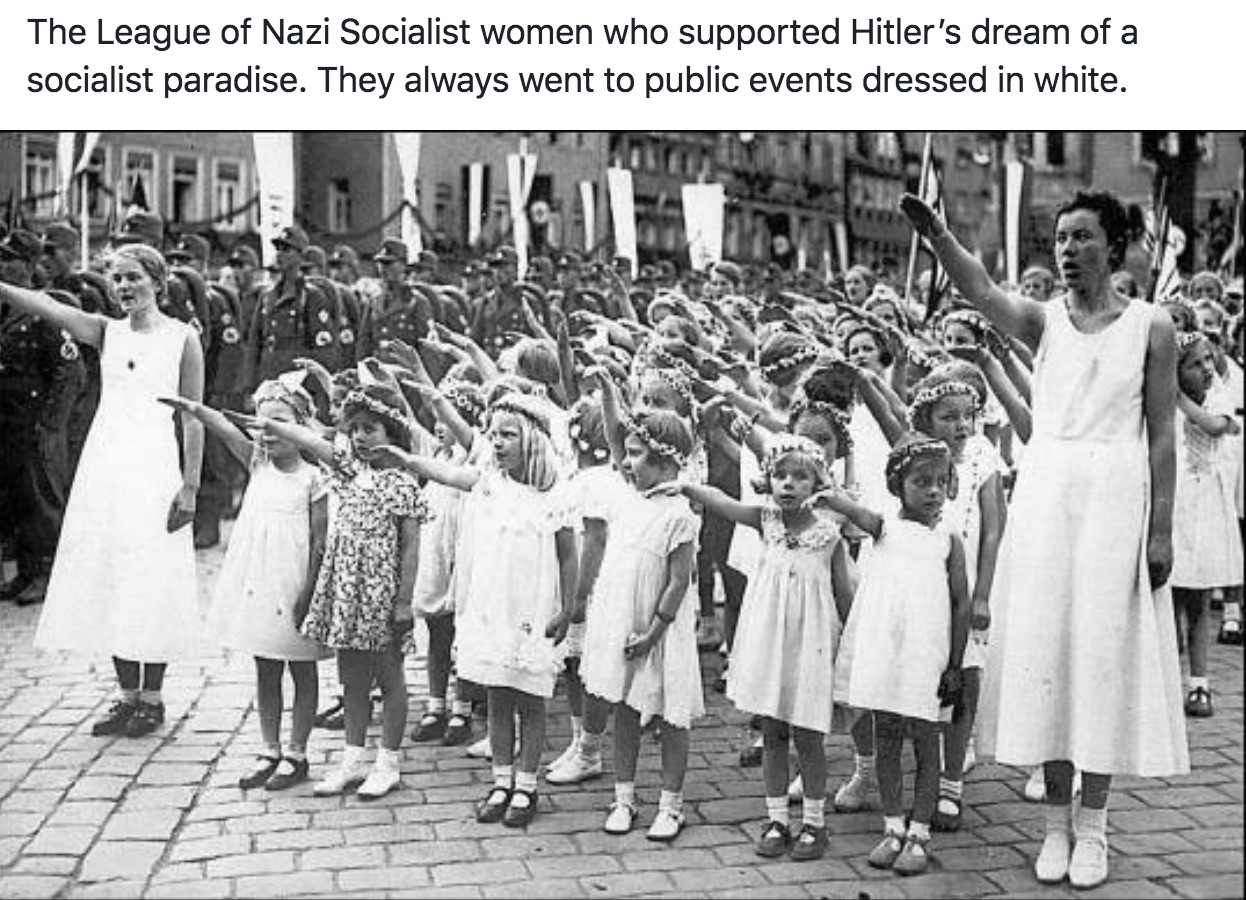 The League of Nazi Socialist women who supported Hitler’s dream of a socialist paradise. They always went to public events dressed in white.

Those two sentences contained several claims: that the photograph shows “the League of Nazi Socialist women,” that said organization “supported Hitler’s dream,” that Adolf Hitler’s goal was a “socialist paradise,” and finally, that Nazi women or women in the purported League “always went to public events dressed in white.” An identical claim appeared on Twitter.

An unsaid but very clear parallel drawn was to the previous night’s State of the Union address and number of Democrats there wearing white attire:

Behind him, House Speaker Nancy Pelosi sat in a white suit jacket and blouse. Before him, a block of female lawmakers donned a range of white outfits and visibly unimpressed expressions. Even his daughter Tiffany was pictured in white, with social media speculating that the choice may have been more than a coincidence.

President Trump’s State of the Union address was flooded with the color white.

In particular, the color is associated with the suffragette movement. Early advocates for women’s voting rights wore white as a symbol of purity, often alongside purple for dignity and green for hope. The suffragettes also used white to reassure onlookers that their protests were non-aggressive.

According to Rep. Lois Frankel of Florida, the chair of the aforementioned working group, Tuesday’s move was a direct nod to the movement.

“Wearing suffragette white is a respectful message of solidarity with women across the country, and a declaration that we will not go back on our hard-earned rights,” she told CNN ahead of [February 5 2019]’s address.

Efforts to enfranchise women began in 1848, concluding in 1920 when American women secured the right to vote. A 2014 Bullock Museum piece titled “The Fashion of Suffrage” explained the link between the color white and the women’s suffrage movement:

No matter which side they stood on, this much is clear—suffragists used their clothing to communicate their message. Women were often encouraged to wear white in suffrage parades, suggesting the purity and high-mindedness of their goals.

Regardless of the fact that women’s suffrage came long before the rise of Nazi Germany, it was possibly a coincidence that both suffragists and Nazi women adopted the same color of clothing. But is that photograph of the “League of Nazi Socialist women,” or even Nazi women?

An image search returned results for the image shown in the Facebook post.The photograph shows just two (2) women, alongside several dozen white-clad children. On its surface, the claim the image shows a “league” of women does not hold water. One result suggested the photograph was archival, and had the following caption:

A group of young girls parade in the Coburg Hauptplatz (market square), giving the “Hitler-Gruß” salute and singing the “Horst-Wessel-Lied,” the unofficial anthem of the Nazi Party. The occasion was the 75th anniversary of the German gymnastics association in Coburg, 1936 … (National Archives, RG 208)

Next, we attempted to track down the “League of Nazi Socialist Women,” but the only results returned were for reiterations of the rumor seen above. Historically, no such organization appeared to exist at all. However, there was a “League of German Girls” (Bund Deutscher Mädel). According to their Wikipedia page, their attire was largely black, and featured white summer tunics and accents (but not all white):

The BDM uniform was a full blue skirt, middy blouse and heavy marching shoes. In 1939, a new uniform was introduced for regional and national leaders within the League of German Girls, and along with the new uniforms came new rank insignia for leaders. These new rank insignia took the form of a silver, and for higher ranks, gold bullion embroidered open-winged eagle on a black (white, on the summer tunic) shield with various types of borders to indicate grade. They were worn on the left chest of the tunic.

In archival images, civilian Nazi women were shown wearing “peasant” style attire, which was a key tenet of accepted attire for women living under the Third Reich:

Women were expected to copy traditional German peasant fashions. They were told to wear plain clothes, flat shoes and have their hair in plaits or buns.

They were discouraged from staying slim or dieting, because it was thought that thin women had trouble giving birth.

However, there was a National Socialist Women’s League. Although the Facebook and Twitter rumor suggested that women in Nazi Germany were politically supportive, their roles were in fact largely confined to the home:

As the women’s wing of the Nazi Party, it was the responsibility of the NS Frauenschaft to teach Nazi women to be good housekeepers, which included using only German-made products. Led by Reichsfrauenführerin Gertrud Scholtz-Klink, during the war the Women’s League held cooking classes, provided domestic servants to the military, collected scrap metal and handed out refreshments at train stations.

Whether Nazis used the word “socialist” is not in dispute, but history is in agreement that the Weimar Republic was not a socialist state. A 1932 piece in The Atlantic focused less on nomenclature than ideology:

In my first article (published in the March Atlantic) I set forth in some detail the dominant ideas which shape the political philosophy of Adolf Hitler. I pointed out that almost everything this remarkable man believes stems from his conception of the Germans as a ‘chosen people.’ From this source spring his rabid nationalism, his violent opposition to Socialism and Communism, his undisguised hatred of the Jews; even his distrust of democratic government and parliamentary institutions is based upon his tribal sense of leadership. I now wish to turn to an examination of Hitler’s methods, —methods by which he has built up the National Socialist Party into a formidable organization commanding the fanatical loyalty of eight million people, and to foreshadow, from his own statements, some of the things he would like to accomplish if the Nazis, or Fascists, as his followers are commonly termed, should succeed in gaining control of the German Government.

The author, Nicholas Fairweather, referenced a previous piece published in March 1932, in which he previously explained Hitler’s impetus in the appropriation of the word socialist — and explained how the  party was not at all “socialist,” except in name:

The principal articles of Hitler’s political faith may be briefly summarized as follows…. His violent animosity to Marxian Socialism as in essence opposed to his ideal of a nationally minded people and a racial state. He condemns the Socialism of Marx as a poisonous teaching which by its humanitarianism, its internationalism, and its pacifism — all legacies of the unnatural an unwholesome democracy of the French Revolution — operates to undermine the clean ideal of Aryan (that is, German) overlordship.

His violent hatred of the Jews as the racial enemies of all Aryans, the subtle corrupters of pure Aryan states. These parasites, says Hitler, have made Marxian Socialism, which they invented, the principal tool by which they insinuate themselves into healthy, pure blooded, racial states in order to debase simultaneously the national ideals and the national blood. Destroyers of Aryan civilizations, they remain impotent to create a civilization of their own.

His concern for social betterment (‘true Socialism’) as a necessary prerequisite to the acceptance of his ideals by the masses…. His contempt for parliamentary institutions as the organs of such a democracy, which substitutes for the decision of a competent leader the majority vote of the incompetent. A parliament, moreover, says Hitler, is the natural field of operations for the Jewish Socialist enemy.

Living in the grinding poverty of the Vienna slums, Hitler soon realized that a wholesome national pride could not be aroused in men who lacked the necessities of life. Hence his interest in social betterment, which ultimately brought the word ‘Socialist’ into the name of his party. Like William Morris, he turned to Socialism as a necessary preliminary to the dissemination of his great idea. Morris became a Socialist, bent on improving the living conditions of the English masses, in order to make them listen to his artistic gospel. Hitler became a Socialist (in his sense of the word) so that the German masses would listen to his gospel of nationalism…. In reacting against the internationalism and class-consciousness of the orthodox Socialists (‘Marxists’ is the term Hitler always uses), he has made himself the outstanding opponent of all Communistic tendencies. This explains the ease with which Hitler appears to have got money for carrying on his movement from capitalists, who could hardly be thought anxious to see him come to power.

He perceived that the Socialist members of Parliament were mostly Jews, and, worst of all, that no paper controlled by a Jew was out and out nationalistic. He concluded that in everything the Jews were poisonous, immoral, and un German.

In other words, Hitler and his party utilized the word “socialist” to rebrand a populist form of fascism, and as a means of enticement. However, his ideology was not actually socialist.

The original claim pointed to a purported photograph of the “League of Nazi Socialist women who supported Hitler’s dream of a socialist paradise” and “always went to public events dressed in white.” There was no “League of Nazi Socialist women,” Hitler did not “dream of a socialist paradise,” and the photograph showed Lebensborn children — not a group of Nazi women, who were generally made to dress plainly, not in white. The white attire adopted by Democratic Party lawmakers was a nod to the women of the suffrage movement, who did in fact wear white to represent their ideals.