Actress Jennifer Lawrence was targeted by right-wing media in September 2017 after outlets ginned up outrage among their followers by claiming that she blamed President Donald Trump for Hurricanes Harvey and Irma.

The manufactured blowback stemmed from an interview with Lawrence aired on Britain’s Channel 4 promoting her movie Mother.

At one point, presenter Jackie Long tells Lawrence that the movie’s director, Darren Aronofsky, explained its dark tone by saying, “It’s a mad time to be alive.”

“There certainly is an end of days feeling about it,” Long adds. “For many people in America who would say, perhaps it’s truer there than anywhere else at the moment.”

It’s scary, and this new language that’s been forming, I don’t even recognize it. It’s been proven, through science, that climate change is due to human activity. We continue to ignore it, and the only voice that we really have is through voting. And we voted, and it was really starting. Watching these hurricanes now it’s hard, especially while promoting this movie, not to feel Mother Nature’s rage or wrath.

Despite the remark not making any reference to Trump — a noted climate-change denier — right-wing media ran headlines falsely claiming Lawrence blamed him for the two storms: 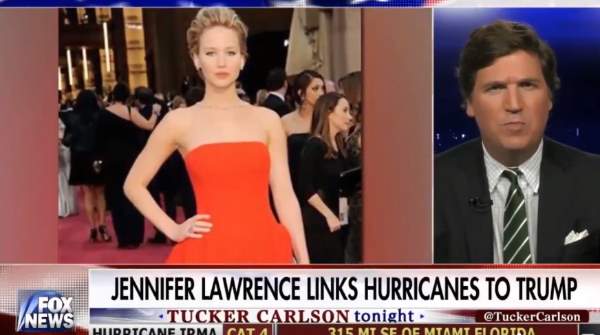 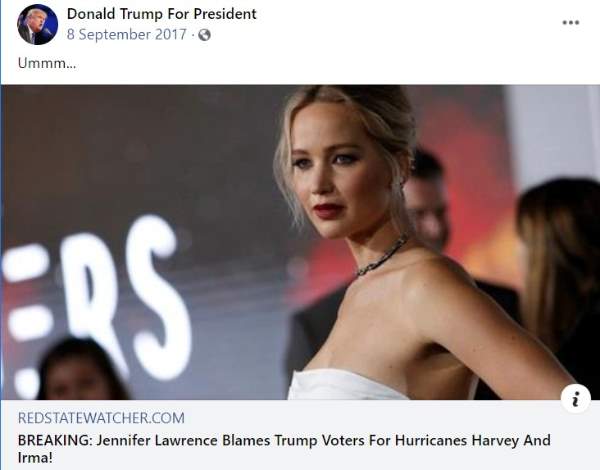 Lawrence subsequently released a statement encouraging fans to donate to charities helping hurricane victims and pushing back against the fake stories slamming her:

My remarks were taken grossly out of context. Obviously I never claimed that President Trump was responsible for these tragic hurricanes. That is a silly and preposterous headline that is unfortunate, because it detracts from the millions of lives that are being impacted by these devastating storms and the recent earthquake. What is really important is focusing on the ways we can help. My heart is with everyone affected and the brave first responders who are working to keep us all safe.

It is possible that the bogus outrage was an attempt to deflect from her actual response to Long’s question about the U.S. experiencing “a time of huge division.”

“It’s really polarizing and upsetting,” Lawrence said. “I’ve seen and heard things on TV in my own country that devastate me and make me sick. It’s really confusing.”

When asked by Long whether Trump confused her, Lawrence replied, “I don’t find him confusing. I think I know exactly what he is.”

Update 6/29/21, 6:14am: This article has been revamped and updated. You can review the original here.