Bomber Designed in 1933 by Russia had a wingspan greater than a US B-52-Truth!

A forwarded email with photos of a massive Bomber built by Russians in the 1930’s.
The Truth:

The Kalinin K-7 was a real Russian Bomber designed in 1933 by WW-I aviator Konstatin Kalinin.

According to The World’s Worst Aircraft – From Pioneering Failures to Multimillion Dollar Disasters by Jim Winchester, the plane had a wingspan greater than the American B-52.

The bomber was 91 feet long and had seven 750HP engines, 6 on the leading edge of the wing and one at the rear of the fuselage.   The K-7 had a wingspan of nearly 174 feet and could fly at a maximum speed of 145 miles per hour.   The aircraft was also designed for other functions such as transporting VIP,  paratrooper and heavy cargo such as tanks. 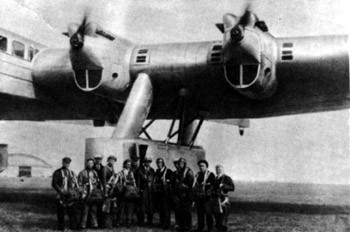 According to the Kharkov State Aircraft Manufacturing Company (KSAMC) in the Ukraine, the K-7 actually first took to the skies on August 19, 1933 and her final flight was on November 23rd of that year.

US fighter strafing runs on German targets during WWII

Winchester’s book noted that the prototype was plagued by vibrations and instability problems caused by the massive propeller engines.

Kalinin and his team of engineers tried to overcome flaws by reducing the size of the tail boom.  The eleventh test flight proved to be fatal when he plane’s elevator jammed causing it plough into the ground below.  The entire crew of 15 perished.

The Soviet government under the command of Joseph Stalin terminated the project and in 1938 arrested and executed Kalinin for espionage and sabotage.

Few photos exist of this plane and the ones included in the email appear to be computer created or enhanced.