A high school teacher in Dallas listed Kyle Rittenhouse as an option for students to choose in writing an essay on a "hero for the modern age."

In mid-September 2020, the Dallas Independent School District in Texas drew national attention after local outlets began reporting on an assignment comparing a 17-year-old homicide suspect with both civil rights activists and one of the people he has been charged with killing.

KXAS-TV posted photographs of the assignment given to English students at Warren Travis White High School asking students to compose an essay covering a “hero for the modern age.”

The teen, Kyle Rittenhouse, was listed as an option for students alongside Cesar Chavez, Malcolm X (misspelled as “Malcom”), Mahatma Gandhi (also misidentified as “Mahatmas”), George Floyd — whose death after being stopped by Minneapolis police officers in May 2020 inspired a new wave of protests against police brutality — and 36-year-old Joseph Rosenbaum.

Rittenhouse, who lives in Wisconsin, shot and killed Rosenbaum and 26-year-old Anthony Huber on August 25 2020, after he traveled to Kenosha, Wisconsin in response to protests against another incident of extrajudicial violence: the police shooting of Jacob Blake. A third person Rittenhouse shot, 26-year-old Gaige Grosskreutz, survived the encounter. 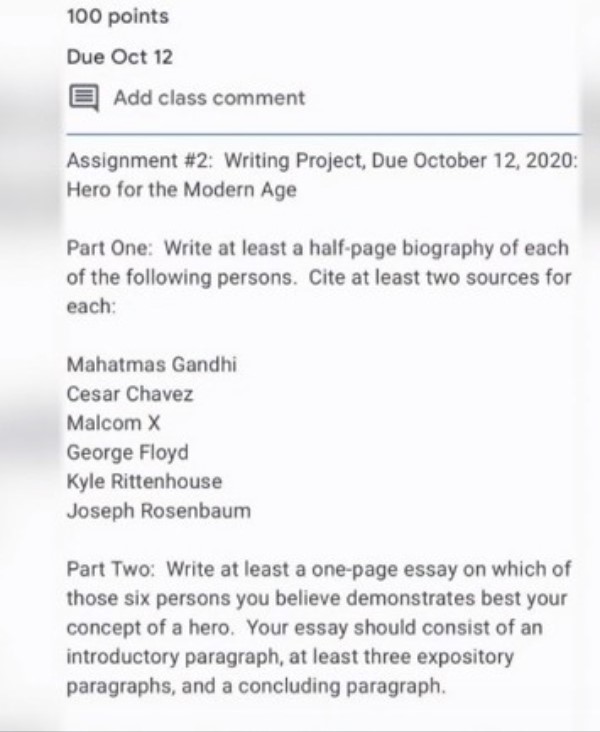 “The juxtaposition of George Floyd’s name with Kyle’s name was just astounding,” said Kristian Hernandez, whose brother was one of the students who received the assignment. “The value of Black lives are not up for debate, and that’s what it felt like this was sort of getting at, by way of the names that were included.”

The district did not identify the teacher who provided the assignment but did say that they had been employed there for three years.

“An unapproved assignment posted in Google Classroom yesterday has been brought to our attention. Understandably, this caused some concern for the impacted students, and we apologize,” the district said in a statement. “Campus administration immediately removed the unapproved content and students are not required to complete that assignment.”

The story spread further after the Associated Press and affiliate stations in other cities picked it up.

Rittenhouse’s lawyer has claimed that the teen was acting in self-defense when he killed Rosenbaum and Huber during the Kenosha protest. White supremacist gangs seized on the Kenosha demonstration itself as motivation to inflame tension in the city by claiming to want to “defend” it. The teen homicide suspect has already been the subject of several online fundraising efforts, including one by a site advertising itself as “the leader in Christian fundraising.”