This is a forwarded email with a photo of President Barack Obama and his wife, Michelle showing them saluting with their left hands over their hearts.   The email asks, “Are both of them as dumb as they appear?”

The Truth:
The photo is a computer manipulation from a picture taken of President Barack Obama and First Lady Michelle Obama during a commemoration ceremony honoring the victims of the terrorist attack of September 11, 2001.  The photo was simply reversed to make it appear as though they were using their left hands.

The original picture was taken on September 11, 2009 on the South Lawn at the White House in Washington DC. 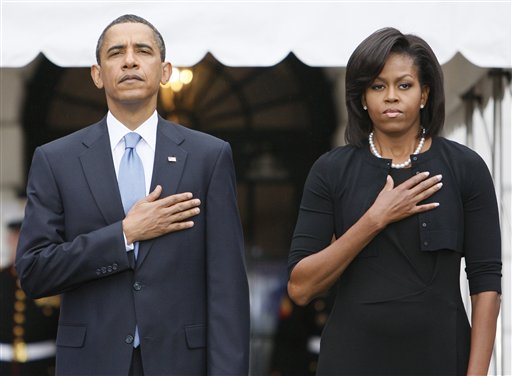 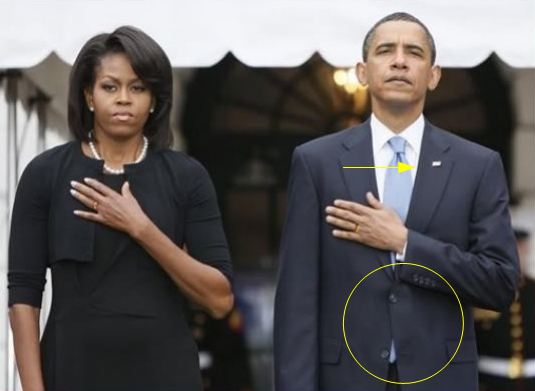 The above photos are the original on the left and the manipulated flipped version on the right.

The Original shows both the President and the First Lady with their right hands over their hearts in traditional salute in remembrance of  those who perished in the attack on America.

With the above side by side comparison we can see how a prankster manipulated photo with computer software.  Important details were missed in the process.

1 The hair of  First Lady was parted on the other side in comparison to the original photo.

2  At the lower right of the flipped photo in comparison to the lower left of the original photo notice the decorations on the US Marine standing behind the President.  On proper military uniforms ribbons are worn on the left side.

3 Both the President and Mrs. Obama wear wedding rings on their left hands, which would have been visible on the original had they used those hands for the salute.   The rings on the right photo were painted onto the fingers.

4 The area in the yellow circle on the flipped photo looks like the grey tones on the President’s coat are off.  The reason for this is that a rectangular section was selected and flipped to make the buttons on the coat appear to be on the right side.

5 The final touch at the yellow arrow was simply selecting the lapel pin and pasting it on the other lapel and then shading in the area of the right lapel with a sample of the grey color from that area. 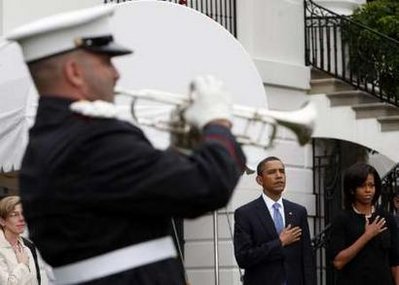 The above photograph was taken from a different camera angle of the President and the first lady saluting properly.