Summary of eRumor:
A forwarded email with photos of what appears to be a giant catfish.   The email says that the enormous catfish was caught in the Huadu Furong Reservoir in China and is blamed for the deaths and disappearance of swimmers.
The Truth:
If you think this one smells fishy, find it hard to swallow or perhaps think this is a whopper of a fish story your are correct.

According to the “Shanghaiist” web site, the origin of this email is very most likely from China and in the Chinese language.  The site went on to say that the government of Huadu had issued a statement disclaiming this saying, “no sighting of any large man-eating fish has been reported, and that no deaths have occurred in the reservoir between 25 July of last year and now.”

The specimen in the photo is not a catfish.  It is, in fact, what marine biologists have labeled a rhincodon typuse.  This is the largest fish in the sea, what we commonly know today as a whale shark. 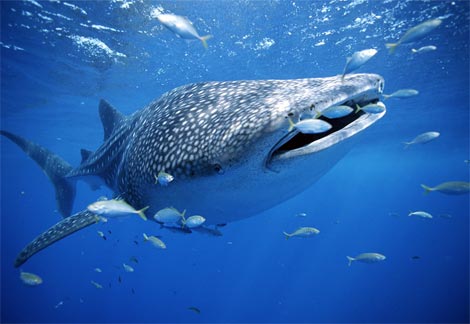 Whale sharks normally range in length from 18 to 32 feet and can weigh just over 20 tons.  They are found in the warm water habitats of all tropical seas.  Although they are classified as carnivorous they really are filter feeders and nowhere close to being a “man eater”.  Filter feeding is a process of gathering food by scooping up plankton, small crustaceans and small fish along the surface with their colossal gaping mouths and filtering their meals by forcing the water out of their gills.

In his “Undersea Discoveries of Jacques-Yves Cousteau Series”, the late undersea marine wildlife expert called them “peaceful giants” and wrote that they have been know to grow between 40 and 50 in length.