Journalists looking into the history of a QAnon-friendly Republican legislator discovered early on that she had a long history of conspiracy theories and disinformation — and her time in office has been characterized by much more of the same.

Georgia Rep. Marjorie Taylor Greene encouraged the conspiracy theory that the mass shooting attack in Parkland, Florida in 2018 was a “false flag” and also posted video of herself harassing one of the survivors for his subsequent support of gun safety legislation.

The exchange on her Facebook page, as reported by the liberal news site Media Matters, was posted on May 15 of that year, just over three months after the 19-year-old gunman killed 17 people at the school and injured 17 others. According to the site:

The shooting also resulted in conspiracy theories, including the claim that it was a “false flag” event — an incident that is either faked or planned by someone other than the actual perpetrator — to take away people’s guns. Those toxic claims were especially spread through right-wing and social media.

Greene, now a member of Congress, was one of those people who spread such claims on Facebook. In May 2018, she posted a story about disgraced Broward County sheriff’s deputy Scot Peterson receiving a retirement pension.

In the comments section, someone wrote: “It’s called a pay off to keep his mouth shut since it was a false flag planned shooting.” Greene replied: “Exactly.”

The comment was later removed, as was a comment where Greene agreed that Peterson’s pension was actually a “kick back [sic] fog going along with the evil plan.” Elsewhere in the comment thread, she agrees with another user speculating that the pention “sounds like a payoff”:

Greene responded to news of the discoveries on Twitter by accusing Media Matters’ writers of being “communists”: 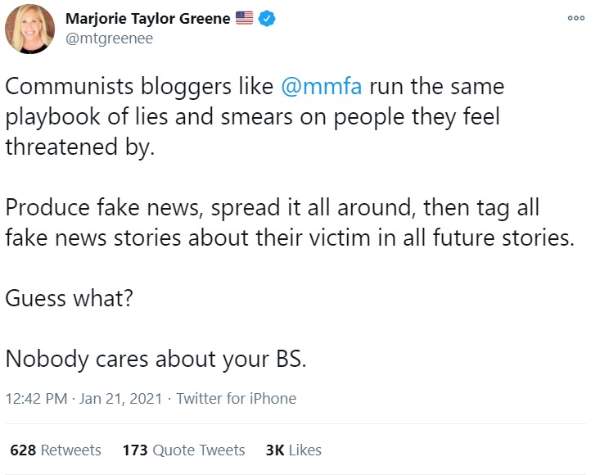 In a separate post, Greene wrote in November 2018 that she had been told that “Nancy Pelosi tells Hillary Clinton several times a month that ‘we need another school shooting’ in order to persuade the public to want strict gun control”:

The lawmaker, who was elected to Congress in November 2020, did not produce any citations nor evidence for this allegation. But as CNN reported, Greene — who first gained attention for her support of the anti-Semitic “QAnon” conspiracy theory on the campaign trail — has only continued publicly pushing falsehoods since taking office, such as false claims of “voter fraud” both in the presidential election and the two January 2021 senate runoff elections in Georgia, and that white supremacists were not involved in the seditious attack against the U.S. Capitol that those lies inspired, along with many other debunked and discredited conspiracy theories.

She invoked yet another conspiracy theory on January 21 2021 in introducing articles of impeachment against President Joe Biden that hinge on allegations of corruption on the part of the newly-elected president involving his son Hunter. When CNN asked for comment, she stayed true to form:

I sent Rep. Marjorie Taylor Greene's office a list of my fact check findings and invited her to comment on any of them. Her communications director wrote back, "Here's our comment: 'CNN is fake news.'" https://t.co/R6slUFDpTf

Greene also posted video of herself on YouTube tailing activist David Hogg around Washington, D.C. Hogg, who survived the fatal attack on Marjory Stoneman Douglas High School and has since been pushing for tighter safety legislation around firearms, is seen ignoring her as she questions why Hogg allegedly had more access to fellow lawmakers than she did, before eventually turning to the camera and claiming (invoking yet another common, debunked, and deeply anti-Semitic conspiracy theory) that Hogg was paid off by George Soros.

“He had 30 appointments where he got to run around and talk to senators,” Taylor Greene complains in the video. “I got none.”

Taylor Greene’s encouragement of death for Democratic Party officials was brought further to light in a CNN report published on January 26 2021:

In one post, from January 2019, Greene liked a comment that said “a bullet to the head would be quicker” to remove House Speaker Nancy Pelosi. In other posts, Greene liked comments about executing FBI agents who, in her eyes, were part of the “deep state” working against Trump.

In one Facebook post from April 2018, Greene wrote conspiratorially about the Iran Deal, one of former President Barack Obama’s signature foreign policy achievements. A commenter asked Greene, “Now do we get to hang them ?? Meaning H & O ???,” referring to Obama and Hillary Clinton.

Greene replied, “Stage is being set. Players are being put in place. We must be patient. This must be done perfectly or liberal judges would let them off.”

“Many posts have been shared. Some did not represent my views,” she claimed. “Especially the ones that CNN is about to spread across the internet.”

While facing more scrutiny for her activities during the January 6 2021 right-wing coup attempt at the U.S. Capitol, however, Greene embroiled herself in a public dispute with Catholic Church officials.

As Salon reported, Greene criticized a Catholic charity group helping undocumented immigrants and said it should support the idea of withholding U.S. aid from their countries of origin unless they were repatriated.

She further claimed that “Satan” was controlling the Catholic Church (referencing several antisemitic conspiracy theories in the process) and added:

If the bishops were reading the Bible and truly preaching the word of God to their flock… and not covering up child sex abuse and pedophilia, that would be loving one another, would have the true meaning and not the perversion and the twisted lie that they’re making it up to be.

That prompted the Catholic League to release a statement accusing her of “slandering” Catholics.

“She needs to apologize to Catholics immediately. She is a disgrace,” league president Bill Donohue said. “We are contacting House Minority Leader Kevin McCarthy about this matter. He’s got a loose cannon on his hands.”

The interview aired after Greene testified in a hearing over her eligibility to run for re-election that she did not remember whether she sent text messages to then-White House chief of staff Mark Meadows before and after the coup attempt against the Capitol. But as CNN reported, texts messages that Meadows provided to House investigators showed that she did:

By January 17, Greene was suggesting ways to keep Trump in office, telling Meadows there were several Republicans in Congress who still wanted the then-President to declare martial law, which had been raised in a heated Oval Office meeting a month earlier.

Greene texted: “In our private chat with only Members, several are saying the only way to save our Republic is for Trump to call for Marshall (sic) law. I don’t know on those things. I just wanted you to tell him. They stole this election. We all know. They will destroy our country next. Please tell him to declassify as much as possible so we can go after Biden and anyone else!”

Attorney Ron Fein, who is leading the challenge to Greene’s eligibility for future office, said the text messages undermine her claim on the stand.

“Anyone who ‘can’t remember’ whether they urged the White House Chief of Staff to talk to the President of the United States about declaring martial law can’t be trusted when they claim they ‘can’t remember’ their own engagement in insurrection,” he told NBC News.

Greene was further implicated in attempts to illegally keep Trump in office on July 12 2022, when she was identified as part of a group of 11 right-wing political figures who met at the White House on December 21 2020 to “disseminate his false claims and to encourage members of the public to fight the outcome on January 6.”

On August 24 2022 Greene claimed online that she had been “swatted” — meaning that police had forced their way into her home after getting a fake tip about a crime being committed there.

The Daily Dot reported that according to a police report, authorities received a call from a person claiming that a man had been shot five times in a bathtub at a residence in Rome, Georgia.

As officers made their way to the scene, however, they learned that the address was Greene’s home and then “made a tactical approach” and rang the doorbell. After Greene confirmed that no incident had ocurred, however, police said that they received another call from a “computer-generated voice” claiming responsibility for the fake report.

“​They explained that they were upset about Ms. Greene’s stance on ‘trans-gender youth’s [sic] rights’,​ and stated that they were trying to ‘SWAT’ her,” the report stated. “The suspect claims that he is connected to the website ‘kiwifarm.net’ which is a site that supports cyberstalking.”

The reference to “kiwifarm” involves a right-wing online forum whose users have been behind actual “swatting” attacks and harassment campaigns, prompting calls for the online security company Cloudflare to stop providing its services to the site. Cloudflare has yet to respond. 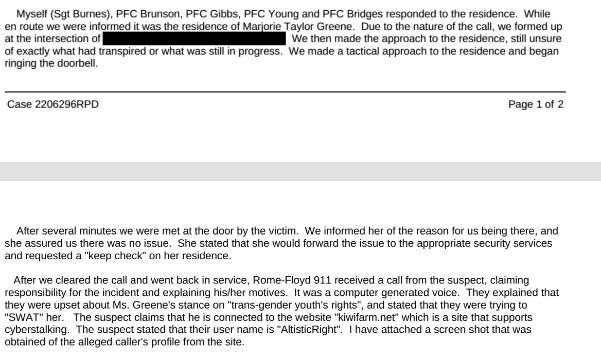 Updated 4/28/22, 2:01 p.m. PST: Updated with report on Greene’s attacks on Catholic Church leaders and testimony regarding her activity during the January 2021 right-wing coup attempt.

Updated 7/15/2022, 2:56 p.m. PST: Updated to reflect Greene being identified as part of a December 2020 meeting designed to illegally keep Trump in office.