The ruins of an ancient road built by the Romans can be found beneath the glass floor of a McDonald's in Marino, Italy.

In late August 2021, the following post about a McDonald’s restaurant incorporating an archaeological discovery into its floor appeared on the Reddit sub r/interestingasfuck and r/damnthatsinteresting:

A Roman Road was discovered while excavating for a new McDonalds in Marino, Italy. They incorporated a glass floor in the restaurant after excavations were complete from interestingasfuck

According to the post, the fast food corporation was excavating to prepare to lay the foundation for a new building in Marino, Italy when they discovered the remains of a road from Roman times, complete (as can be seen in the accompanying image) with skeletons. No further information about the purported restaurant was immediately obvious in the post. 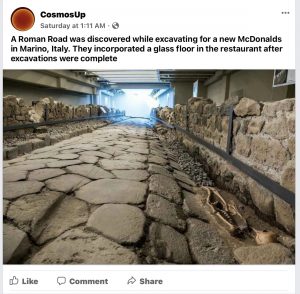 A Roman Road was discovered while excavating for a new McDonalds in Marino, Italy. They incorporated a glass floor in the restaurant after excavations were complete

While neither of these posts were dated and it is not entirely clear why this came up again in August 2021, it is true. Stories of the discovery were first reported in 2017,  often accompanied by the same or similar images from various angles:

The newly opened [as of 2017] result is the only McDonalds on Earth that includes an ancient Roman artifact. It all started in 2014, Povoledo reports, when workers in Marino came across a 147-foot-long stretch of road dating between the first and second centuries B.C.E. The road would otherwise have been documented and reburied, Povelodo notes. Instead, McDonalds sponsored an archaeological dig and used the road as part of the restaurant.

The displayed skeletons were re-created out of resin cast from three bodies were found buried in the ancient site.

It is not uncommon to find sites of archaeological interest in places that are now considered unremarkable or jejune. In England, for example, the long-lost bones of King Richard III, who was killed in battle in 1485, were found beneath a parking lot in 2012:

In August 2012, an excavation began in a city council car park – the only open space remaining in the likely area – which quickly identified buildings connected to the church.

The bones were found in the first days of the dig and were eventually excavated under forensic conditions.

Details of the reburial ceremony have yet to be released, but Philippa Langley from the Richard III Society said plans for a tomb were well advanced.

The Rosetta Stone was discovered by French soldiers in July 1799 while they were digging to enlarge a fort during Napoleon Bonaparte’s campaign in Egypt:

Although accounts of the Stone’s discovery in July 1799 are now rather vague, the story most generally accepted is that it was found by accident by soldiers in Napoleon’s army. They discovered the Rosetta Stone on 15 July 1799 while digging the foundations of an addition to a fort near the town of Rashid (Rosetta) in the Nile Delta. It had apparently been built into a very old wall. The officer in charge, Pierre-François Bouchard (1771–1822), realised the importance of the discovery.

On Napoleon’s defeat, the stone became the property of the British under the terms of the Treaty of Alexandria (1801) along with other antiquities that the French had found. The stone was shipped to England and arrived in Portsmouth in February 1802.

The McDonald’s restaurant appears to be the first to incorporate the ruins into its business, however. The corporation does promise to keep the two sites separate:

While the integration of the chain and the archaeological site could have easily resulted in a gimmicky dining spot, the corporation has worked carefully to display the road as any other preserved ancient site: There’s no McDonald’s branding in the gallery, which is also accessible from the outside; you don’t need to set foot in the restaurant to reach it.

“We’ve been able to return a stretch of Roman road to the local community and to the whole of Italy,” Mario Federico, the head of McDonald’s Italia, told the Telegraph. “The project is a good example of how the public and private sectors can collaborate effectively on reclaiming cultural heritage.”

As of 2021, the dig site with a restaurant attached (or the restaurant with an archaeological site attached) remains open to the public.