On March 18 2019, a Facebook user shared the image below (archived here) with the caption “monster supercell, burwell, nebraska”: 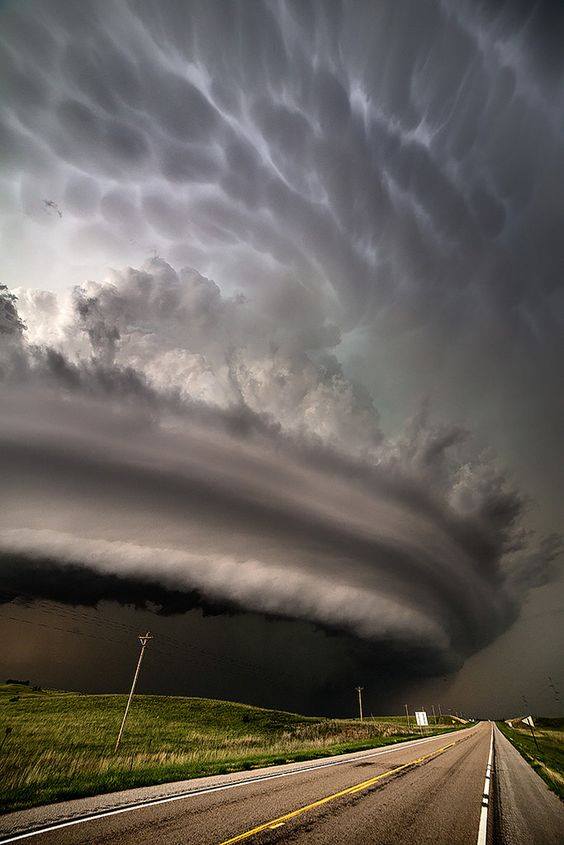 Several commenters expressed their concerns for the original poster’s safety, while others pointed out that they had seen the image before.

A reverse image search returned matches as far back as July 2014, and the first version of the picture  was apparently shared to Flickr by Ryan McGinnis on July 24, 2014:

A vertical shot of the monster HP supercell that pummeled the open range north of Burwell, Nebraska, June 16, 2014. This storm had several rain-wrapped tornadoes earlier in the storm’s lifecycle.

A June 19 2014 Weather.com article described the supercell, referencing a radar loop from the weather event:

From that loop, it appears there were three separate tornadoes:

Tornado A first formed west of Stanton, Nebraska, then soon weakened north of Stanton as it curled toward the north.

Tornado B then formed east of Stanton and appears to have been the one that hit Pilger, Nebraska.

Tornado C then formed just southeast of the Pilger tornado, then wrapped northward tracking close to, or interacting with, tornado B.

All these tornadoes were rated EF4 by the National Weather Service. A fourth tornado occurring after the radar loop above touched down well northeast of Pilger.

Multiple tornadoes simultaneously from the same thunderstorm are not as unusual as they sound.

What was impressive and unusual about the Pilger tornadic supercell was the appearance of two distinct large, strong, long-lasting tornadoes at once, shown live on The Weather Channel.

On June 16, 2014 a family of tornadoes dropped from a parent supercell moving over northeast Nebraska. It was only the beginning of a multi-day tornadic event in the region. But the supercell near Pilger, NE was the most dramatic of the event and arguably the supercell of the tornado season.

Although the photograph of a “monster supercell” in Burwell, Nebraska is authentic, it shows a well-documented weather event in Nebraska in 2014 — not 2019.