According a statement by White House Press Secretary Robert Gibbs, the President would be spending some time in private prayer that day – “as he does every day.”

A spokesperson from the National Day of Prayer task force told TruthorFiction.com that the 2010 event, now in its 59th year, is scheduled for May 6th but there is still no word from the Obama Administration regarding ceremonial observance at the White House.  The spokesperson also said Evangelical leaders were invited to gather for a ceremony of prayer and commemoration in the East Room at the White House during the years that President George W. Bush occupied the Oval Office.

The myth that the White House ceremony is a 21 year tradition is a fabrication.  The National Day of Prayer task force, in a May 4, 2009 USA Today released a statement saying, “While there will be tens of thousands of prayer gatherings throughout the nation, on May 7th, the Obama Administration announced there will not be a White House Observance for the National Day of Prayer this year, contrary to the administrations of President George W. Bush, President George H. W. Bush, and President Ronald Reagan. A White House Observance was not held during the administration of President Bill Clinton.” 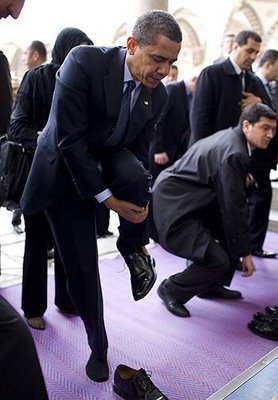 Additional confusion has been sparked over a Muslim prayer event that was scheduled in September 25, 2009.  There was no official White House ceremony for this event.

Some forwarded emails included a photograph of President Obama removing his shoes as he prepared for the prayer event.   The photograph was taken prior to the President’s tour of a Mosque in Turkey.   Truth of Fiction findings are posted at this link:  Muslims Pray at the Capitol

United States Is Not A Christian Nation?